Skip to content
Home » Series » Boruto » Is Jigen an Otsutsuki In Boruto?
Boruto You must be wondering who this Jigen guy is, especially if you’re an anime-only fan! Is he a human, is Jigen an Otsutsuki, or something else? Worry not, because we’ll answer your question in this article! So without any further ado, let’s get right into it!

Contents hide
Is Jigen an Otsutsuki?
Who Is Jigen? His Story Explained!
So, How Did Jigen Get A Karma Seal? Is He an Otsutsuki?
TL;DR:

Is Jigen an Otsutsuki?

Well no, he actually is not an Otsutsuki. Let’s break it down slowly. In chapter 45 of the Manga, Amado reveals that Jigen is actually a vessel of Isshiki Otsutsuki! Moreover, he went into detail and explained Jigen’s story. By now, you must know what story I’m talking about! Amado revealed that Jigen was originally a human!

Who Is Jigen? His Story Explained!

As Amado said, Jigen was originally a human; a young monk. It is likely that he had only recently become a monk. While we don’t know much about Jigen’s human self, he certainly was not a strong person.

This also makes sense since Jigen can be deemed as ancient at this point; he was alive during the time Kaguya came to Earth for the first time! Even shinobis didn’t exist back then! This means that Jigen has been alive for at least 1000 years! But, this would’ve been impossible if Jigen was a normal human, right? It should be obvious by now that Jigen beat time through only one way; by becoming an Otsutsuki!

So, How Did Jigen Get A Karma Seal? Is He an Otsutsuki?

Jigen didn’t become an Otsutsuki voluntarily. In fact, he didn’t even know who the Otsutsukis were! Rather, he was attacked by Isshiki Otsutsuki, a member of the Otsutsuki clan. He later infested a Karma seal on Jigen. In chapter 46 of the manga, Amado reveals that Isshiki came to Earth with Kaguya, the progenitor of chakra. Being the inferior, Kaguya had to sacrifice herself after placing a Karma seal on someone, to create a strong Chakra fruit. However, Kaguya betrayed Isshiki when he had his guard down! She left him to die after her assault and went to extract the Chakra Fruit from the divine tree nonchalantly.

However, Isshiki managed to find a human whom he could possibly infest the Karma seal with before dying. That human was Jigen. Isshiki entered Jigen’s body through his ear and survived off of Jigen’s body nutrients. Over time, he healed and gained complete control over Jigen and then finally planted a Karma seal on him.

Then, the Karma seal started fulfilling its objective; erasing Jigen’s DNA and replacing it with Isshiki’s DNA; leaving only Jigen’s physical form behind. As this process continues, Jigen becomes more and more like an Otsutsuki. Eventually, Karma replaced all of Jigen’s DNA with Isshiki’s; making Jigen (only his physical form) an Otsutsuki. Jigen lost his soul as Isshiki was controlling his brain from the inside. But, this is a rare case, as Jigen would’ve lost his soul after Isshiki’s resurrection.

Didn’t understand what I chattered about? Let’s understand Otsutsukis and the Karma Seal in brief so that all of your confusions have been cleared up!

So, Otsutsukis are rather simple creatures. They’re what Amado calls “Alien Parasites”. We all know that an Alien is a being that does not belong to the Earth. A parasite is an organism that survives by getting all of its required nourishment from another organism, i.e. the host. Here, the host may differ from organism to organism. Since the Otsutsukis are so strong, their hosts are planets! This is why they attack planets and extract their Chakra fruit so that they can grow stronger.

Moving on to Karma, the seal is basically a backup drive for the Otsutsukis. After a certain amount of time, the person infested with the Karma seal becomes a complete Otsutsuki. Click here to read more about the Karma Seal!

Now, you know why Kaguya attacked Isshiki, and why the latter wasn’t able to infest Jigen with Karma directly! In my opinion, it just shows how strong Isshiki really is! Even though he couldn’t apply the seal directly; He managed to survive long enough to shrink and get inside Jigen’s ear even with no lower body!

Jigen was originally a human, a young monk. One day, he was attacked by a severely injured Isshiki Otsutsuki, who then shrunk and entered his ear. Over time, Isshiki absorbed nutrients from Jigen’s body and eventually infested the Karma Seal on him. Isshiki eventually took complete control over Jigen, making him a complete Otsutsuki as Jigen’s human self ceased to exist.

With this, I hope that you have your answers regarding Jigen being an Otsutsuki! Let us know your thoughts about Kawaki in the comments below! 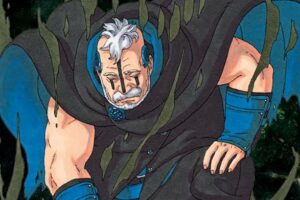 1 thought on “Is Jigen an Otsutsuki In Boruto?”