How Did Kakashi Get The Sharingan & Mangekyou Sharingan 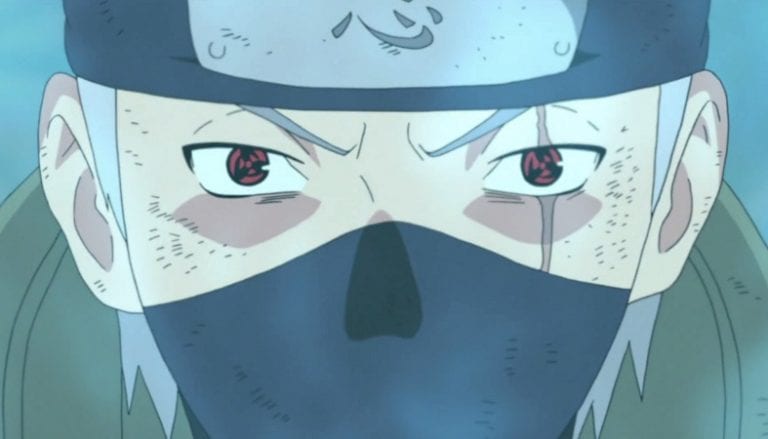 Despite being a non-Uchiha, Kakashi unleashed his Sharingan against Zabuza and fans have been scratching their heads; especially the new fans who are just discovering the world of Naruto!

Well, all these questions are answered by Kishimoto sensei in the story itself! But, for those who don’t know, let’s get right into it!

How did Kakashi get the Sharingan?

During his early times as a shinobi, Kakashi was a part of Team Minato; with Minato Namikaze as his sensei and Obito Uchiha and Rin Nohara.

Obito even though an Uchiha was considerably weaker than Kakashi in every aspect. He was sloppy in nature and boastful about his lineage as an Uchiha.

He strongly believed that once he activates his Sharingan he will be the strongest. Along with that, he dreamt of becoming the Hokage someday.

During their tenure as a three-man team, the third great ninja war started. However, before the war starts Kakashi gets a promotion to the rank of Jounin.

During the war, Minato and his team carried out missions across various fronts. During one such posting, team Minato had to destroy the Kannabi Bridge in Kusagakure. The destruction of the bridge would curb enemy supplies.

As the team entered Kusagakure, they are scout an Iwagakure shinobi. Kakashi tries to kill him with his newly developed Chidori. However, due to the tunneling effect, Kakashi leaves an opening for a counter-attack. Thus, forcing Minato to kill the Iwa shinobi himself.

He further advised Kakashi to never use Chidori again. In the meantime, Minato receives an order to face off Iwagakure Shinobi at another front; leaving Kakashi in charge.

This is the same front where Minato kills 1000 shinobi alone. After Minato leaves, the team is under ambush by the partners of the Iwa scout; who end up kidnapping Rin in the process!

To which, Obito offers to go after Rin in order to save her whereas Kakashi prioritizes the mission. It is then Obito delivers his iconic line about friendship, making Kakashi face his trauma.

With a change of heart, Kakashi joins Obito and engages in a battle with the Iwa scout team! During this battle, Kakashi loses his left eye Also, Obito finally unlocks his Sharingan with 2 tomoe. With the help of which, the kids manage to defeat the Iwa scout team.

After they rescue Rin, the cave in which they were holding her captive collapses on itself. To save Kakashi and Rin, Obito pushes them away crushing his entire right side under a huge boulder.

Obito knowing his inevitable death offers Kakashi his left Sharingan as a gift for the latter’s promotion as a Jounin. Thus, granting Kakashi his Sharingan.

The other Uchiha of the village did not object to Kakashi getting the Sharingan; as it was the dying wish of a young boy.

Post receiving his friends Sharingan as a gift Kakashi earned himself a new moniker as “Kakashi of the Sharingan”. His proficiency in using his borrowed Sharingan was such that even Itachi Uchiha; a genius amongst Uchiha praised him for it!

How did Kakashi get Mangekyou Sharingan?

Kakashi and Obito awakened the Mangekyou Sharingan after Kakashi accidentally killed Rin by piercing through her chest with his Chidori.

All of this started when the Mist ninja controlled by Madara secretly kidnapped Rin and sealed Isobu; the Three-Tailed beast inside her during the Third Great Ninja War.

The mist ninja applied a Forbidden Individual Curse Tag too. This tag would unseal Isobu as soon as Rin and Kakashi return to Konoha.

Madara’s motive to use Rin as a sacrifice was for controlling Obito. He hoped that the boy would give in to his dark side after witnessing his love’s death; lose faith in this world.

However, Madara had a backup plan if Obito didn’t sway too! If Rin made it to Konoha, he could at least take his revenge against the Village Hidden in the Leaves.

Rin decided that she has to die so that the Leaf village doesn’t suffer. However, she couldn’t kill herself. So, she asked Kakashi to kill her instead.

As one would expect, Kakashi declined. He had promised Obito to protect her with his life. But, Rin knew that her survival would put thousands of villagers’ lives at risk.

To prevent this, Rin committed suicide by jumping in front of Kakashi’s Chidori; which should have hit a Mist Ninja.

Unfortunately, Kakashi didn’t witness this alone. Along with the remaining mist ninjas, Obito witnessed this horrifying scene as well.

The pure trauma that the two Sharingan holders felt was something they had never imagined. Kakashi killing the girl he had sworn to protect; Obito witnessing his best friend kill his love; whom he trusted to protect her more than his life.

As you may know, the Sharingan user must suffer huge trauma/pain to awaken the Mangekyo Sharingan. Strong emotions like fear, anger, or sadness help evolve the Sharingan.

They awakened the Mangekyou Sharingan through their experience of this incident.

But, that is false!

Kakashi faced intense trauma and fear too. This led him to awaken the Mangekyou Sharingan.

While Kakashi fainted due to over-exhaustion, Obito instantly showed just how strong his Magnekyou Sharingan was.

He went on a rampage that has left its mark in animanga history; as one of the most brutal and emotional rage scenes.

While Kakashi didn’t seem to use it much until the start of Naruto Shippuden; he awakened it at an early age. There could be numerous reasons as to why he didn’t or why he should have.

Nonetheless, it seems like Kakashi used the Mangekyou Sharingan for the first time against Deidara; as he simply couldn’t handle him with a normal Sharingan.

Moreover, this was post-time skip; meaning he doesn’t have to protect three rookie genins. Naruto and Sakura’s growth made room for Kakashi’s growth as well.

This is crucial, as Kakashi couldn’t use his Mangekyou Sharingan more than two times in a day! He would require week-long bedrest as he is not an Uchiha.

But wait! Kakashi used Susanoo to fight Kaguya, right? So he must have had two Sharingans? Yes! He did! Madara stealing the Sharingan was not enough to keep the Copy Ninja down!

There’s a solid reason for that as well. It involves the principle of Ninshu which the Sage Of Six Paths openly practiced and preached!

How did Kakashi get the Sharingan in both eyes?

Kakashi got a pair of Sharingan in chapter 688 of the manga, after Obito’s death. As Kakashi and Obito rushed in to act as shields for Naruto and Sasuke against Kaguya; Obito used his Kamui to save Kakashi.

After succumbing to Kaguya’s attack, Obito perished and his soul went into the afterlife. Over there he met Rin and promised to save Kakashi for the last time.

So that Kakashi can carry on Obito’s dream of becoming a Hokage. In order to help Kakashi, Obito’s soul returns and transfers Sharingan chakra to Kakashi; allowing him to manifest a perfect Susanoo.

But how did the transfer of chakra takes place? How did Kakashi get Sharingan in both eyes? I’ll explain. But first, keep Obito’s promise in mind.

As Obito stated in chapter 688, Obito’s Sharingan would work for a limited time only. As Obito’s chakra ceased to exist in the human world, his spirit left for the afterlife; taking the Sharingan with it as well.

The reason for Kakashi getting the Sharingan in both eyes stems from how chakra works. We know that everything in the shinobi world is connected by chakra; even souls are made of Chakra!

For example; Minato’s soul was stuck inside the Shinigami’s belly; with the Yang chakra of Kurama. This is due to the nature of the sealing jutsu he performs.

Similarly, the chakra is a binding force in all of Naruto-verse. This means anything and everything has chakra and is connected by it. And in Naruto-lore one can share chakra with each other.

Thus, we see some part of Minato’s soul inside Naruto’s seal along with Kushina’s soul. Furthermore, Danzo was able to use the Sharingan’s of dead Uchihas due to him physically having the eyes containing Sharingan!

To which, he can provide his own chakra. If this wasn’t the case, then Kakashi wouldn’t have been able to use Obito’s Sharingan in the first place.

Now that we know when and how Kakashi got his Sharingans, one more question about his eye remains! People have always wondered if Kakashi could turn off his Sharingan, just like the other Uchihas. So, let’s find out!

Why Can’t Kakashi Turn Off His Sharingan?

The Sharingan is an Uchiha clan Kekkei Genkai. That means, only a person born as Uchiha can efficiently use it.

The Sharingan forms when an Uchiha experiences extreme emotions, be it positive or negative. This is due to their brain releasing a certain chakra to their optic nerves.

This flow of chakra with time and training the Uchiha’s learn to control. Also, the chakra requirement for activating Sharingan is much less for an Uchiha body in comparison to a non-Uchiha body.

Thus, when a non-Uchiha receives a Sharingan; their brains are biologically incapable of altering the chakra flow to the optic nerves. Therefore, Kakashi’s Sharingan is active 24/7.

This also makes him expend a huge chunk of chakra to keep it active!

Due to these limitations, Kakashi never overuses his Sharingan and also why he can never turn it off!

However, post the fourth Shinobi war, Kakashi is no longer in possession of the Sharingan. Thus, eliminating his major handicap of excess chakra exertion.

Although this again is a double-edged sword for him as without his Sharingan; Kakashi can no longer use his signature moves Raikiri and Chidori.

Kakashi received the Sharingan as a gift from Obito, who was halfway under the rock. This unfortunate incident took place as team Minato was returning after rescuing Rin.

Kakashi awakened his Mangekyou Sharingan after Rin committed suicide by stepping in the line of his Chidori. Madara had planned all of this by sealing Isobu inside Rin and leading Obito to the place where Rin died. This caused intense pain and trauma to both Kakashi and Obito, causing the two to awaken the Magekyou Sharingan.

With this, I hope this article serves as a good answer to your question! And if you’re wondering about how Kakashi lost the Sharingan; then click here! With that said, the tale of Kakashi and Obito is as tragic as it gets; do tell us what you think about this in the comments below!