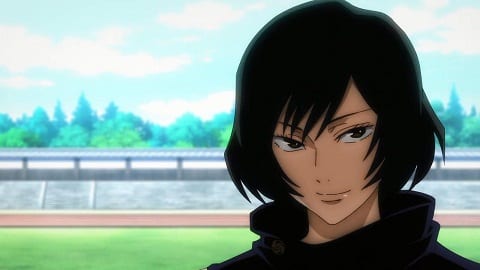 Ever since Jujutsu Kaisen introduced Maki and Mai in the school meet arc, fans were curious to know more. It was an unconventional bond but one that tugged at our heartstrings.

Few JJK chapter 149 spoilers have surfaced online, hinting at what could happen in the chapter. However, remember to take these spoilers with a pinch of salt and read the chapter on Viz or Mangaplus on its release for free!

The last chapter revolved around the Zen’in family and hinted at the brewing politics within. However, the cover featured Maki and Mai yet unborn. This image told us once again that the bond between these sisters is an important one. Before we see what chapter 149 revealed, let’s have a recap for chapter 148.

What happened in chapter 148?

As we saw in chapter 147, Maki reached the Zen’in clan to retrieve the cursed tools from the warehouse. But, we knew it was not going to be a cakewalk. The chapter opened with Naoya passing another one of his rude comments to Maki and her retort.

Maki and Mai’s mother made a feature in the chapter as well, just to show her disappointment in her children. Maki paid no heed to her comments and made her way to the warehouse. But, a not-so-pleasant surprise was waiting for her there. Her father, Ougi Zen’in, was ready to kill Maki. He had already fatally injured Mai.

The chapter then showed us Naoya and Jinichi talking about their plan to kill Maki, Mai, and Megumi. They planned to accuse the three of trying to free Gojo Satoru, who is now a criminal. To earn credibility, Ougi himself proposed to kill his children taking out all cursed tools from the warehouse.

Maki struggles to fight against Ougi but ends up breaking his blade. However, it was not the end as Ougi managed to heavily hurt Maki. The last panel of the chapter showed Ougi telling Maki that he could never become clan head because his children were weak.

In our article, we had speculated that Maki and Mai would team up to defeat Ougi. But we had not speculated what the spoilers told us.

According to Jujutsu Kaisen chapter 149 spoilers, Mai died while giving the last of her life for Maki.

The sisters were still alive after chapter 148. Ougi dragged them by their collars to a dungeon-type room, cursing them all the while. The room was a special room for training and punishing filled with grade 2 or lower-level curses. However, only Mai was conscious, and Maki was unconscious. Mai refuted Ougi’s claims that his failures were due to his failure children. According to him, he is the same as Naobito as a jujutsu sorcerer except for his children’s capability.

Mai said that there is nothing like children dragging down parents. But, Naobito paid no heed to her and threw both of them into the room. The curses in the room were afraid of Ougi’s cursed energy but would eat the sisters once he left. He told them that all jujutsu sorcerers are “physically gifted,” so there was nothing special in Maki’s ability.

Ougi’s last words to the sisters were “Farewell, the stain of my life.”

Mai checked Maki’s condition and realized that she was tough enough to be alive still. She had already anticipated that something like this would happen someday.

Maki regained her consciousness only to wake up lying on a beach. This scene takes place in Maki and Mai’s hearts. Maki hears Mai’s voice telling her about her technique, and Maki turns her head. Mai was sitting next to her and told her what we already knew. She can’t use her ability to make large or complex objects.

Mai will use her technique to create a weapon for Maki. However, to make the weapon, it will take all the cursed energy she had. Mai begins walking to the sea, and Maki panics, asking her what she was talking about. She revealed that jujutsu considers monozygotic twins as the same person. Mai figured out why twins were a bad omen – because both of them are a single entity.

Even if Maki works hard until she vomits blood, there is no meaning to it until Mai is alive. This is so because Mai has no intention of getting stronger. As long as Mai is alive, Maki will always be half-assed. Maki chased Mai to the sea but she only passed a weapon to her. She saw Mai as her younger self before regaining consciousness, and tried waking up Mai.

Mai told her that she is leaving the weapon behind but taking everything else. She even ended up absorbing what little cursed energy Maki had. Then, in Mai’s last moments, she asked Maki to make a promise to “destroy everything.”

Maki used the weapon Mai gave her to cut down all curses. Ougi realized the curses were eliminated too. Maki came out of the room to fight Ougi, who senses imminent danger. Maki is now like Toji Fushiguro with incredible physical strength and absolutely zero cursed energy. She swung her blade at Ougi’s head and cut it open in one swing.

In the end, she whispers to Mai that it is starting.

Here are the leaks for Jujutsu Kaisen chapter 149:

Did you expect this development? And do you think Maki will go into rage at her sister’s death? Let us know in the comments below!