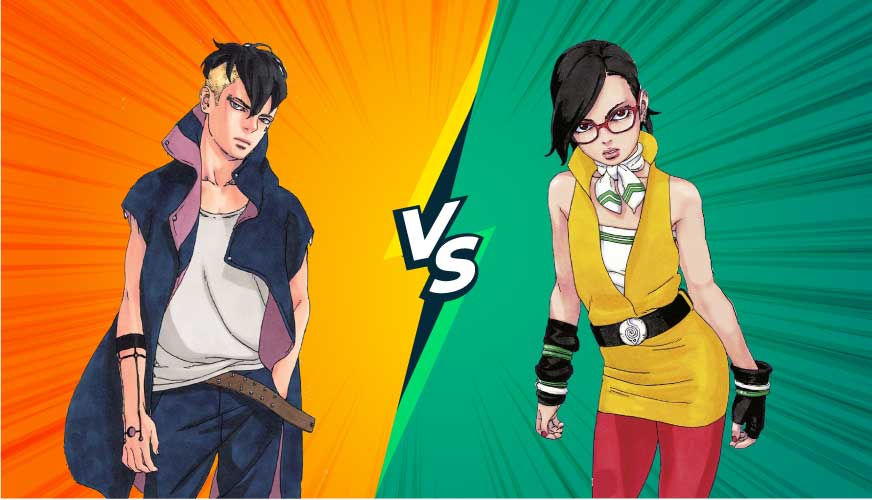 The leaks for Boruto chapter 58 spoilers are out and they look good! With the training arc beginning in full swing, it seems like we’ll witness some great match-ups, character developments, and the creation of bonds! The recent chapters have been focusing on Kara too, revealing details about Code and Eida. However, this is the first time in a while that Kara members were not a part of the chapter. It seems like the manga’s pace is finally slowing down a bit and taking its time for the much-needed build-up!

But, these are leaks, and not the official chapter so take these with a grain of salt and make sure to read the chapter at viz.com for free!

The chapter starts with Naruto sitting with Boruto, telling him about the pills that Amado gave him. He explains that the side effects could even lead to death as Boruto holds the pill in his hand and is inspecting it. While Naruto is explaining and asks Boruto to take his time to decide if he wants to use this supplement or not; Boruto immediately pops the pill, leaving Naruto in utter shock! After a few comedic scenes; Boruto tells Naruto that he was already prepared for the worst since the day he found out about his Karma seal, and he’s ready to take all the necessary steps to stop the Otsutsuki inside him.

The next scene shifts to Kawaki fighting Mitsuki and Sarada. This marks the beginning of the training arc, as the new team 7 trains while Konohamaru and Naruto are keeping an eye on the team, hiding in a tree. Before they could start, Kawaki asks Boruto why he’s taking the pills. The two have an argument as Kawaki says that Boruto shouldn’t risk his life due to such pills, as it might hinder their plan of placing a Karma seal on Code. However, Boruto retaliates and says that the plan is purely hypothetical. Sarada interferes and calls both Boruto and Kawaki noisy and tells them to focus on their training instead.

Both of them continue to argue over things and while Sarada tries to get them to train, even Konohamaru finds Kawaki to be problematic.

Still, Sarada says that they’ll practice basic chakra control but Kawaki doesn’t seem to be too interested. He states that while clearing the basics is good, but this way, it’ll take years to prepare for a threat like Code. Boruto and Kawaki get into yet another fight about training methods. Then, Mitsuki asks Kawaki about how he wants to train, and he suddenly attacks Mitsuki. Mitsuki manages to wrap his arm around Kawaki’s and the latter praises Mitsuki for surpassing his expectations.

Witnessing this, Konohamaru decides to intervene, but Naruto stops him and they both observe the training session.

Kawaki keeps on ignoring Sarada and keeps talking about how Jigen trained him. He says “I was tired of seeing that damn bastard’s face. I wanted the power to kill that guy with my own hands… Baring that in mind wholeheartedly, I suddenly got stronger…”

He then mentions that this method actually worked for him, so they should try it. Hence, he starts attacking Mitsuki again. However, Sarada has to interrupt again and point out that he’s going too far again. After a small quarrel between the two, he starts attacking Sarada too. Enraged, she launches a fireball on him and then hits him with multiple shurikens after he manages to survive the fireball. Sarada’s actions frightened Boruto, as she was fighting seriously. However, it turns out that Sarada was fighting a Kage Bunshin! Kawaki reappears behind the Uchiha, and Boruto interrupts just before Kawaki was going to land a major hit on Sarada.

After some more argument between Boruto and Kawaki, they decide to have a match, and they train according to the winner’s wish. Naruto and Konohamaru are still watching but are more concerned. During this short fight, Boruto wins as Kawaki subconsciously tries to use Karma to absorb chakra, but is dumbfounded after he remembers that he doesn’t have the seal anymore. He is frustrated over how he was so dependant on the Karma seal. He is worried about how he’ll protect Naruto. Boruto also states that Kawaki has changed, and he feels like he can understand him to an extent. He also says that Kawaki shouldn’t burden himself and rely on his friends too.

Then Naruto, Konohamaru and Boruto come in front of Kawaki and comment on what they thought about his fight, Mitsuki and Sarada comment on it as well. Surprisingly, it doesn’t seem like Sarada is holding a grudge against Kawaki, as she provided some good constructive criticism.

It seems like Kawaki is desperate to grow strong at a rapid pace, and he wants the others to do the same. While they are arguing and fighting, there isn’t any bad blood between them, or so it seems. Again, these are leaks, please read the official chapter for free after it is released on Viz Media!

So, what do you think of Boruto Chapter 58 spoilers? Let us know in the comments below!