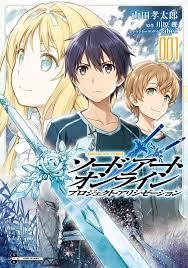 According to the 29th chapter of Sword Art Online – Project Alicization manga written by Kōtarō Yamada, the manga will end on 11th June 2021. The 30th chapter will be the final addition to the series.

Yen Press describes the plot of the manga as follows:

“Deep in an unfamiliar forest, Kirito awakens with sensations far too convincing for a virtual world… With memories of a life he doesn’t remember living. A boy and a girl…and a name that sticks in his mind: Alice.”

Additionally, official sources at Kadokawa’s Dengeki Playstation Comic Web Service announced that the manga adaptation of the Alicization Lycoris game ended on May 14. Kadokawa will publish the final and third compilation volume of the manga on 27 July.

The Alicization Lycoris manga does not follow the original Alicization: war of the underworld arc. Though set in the same setting as the anime, the manga differs midway through into the story.

The series in question, Sword Art Online is a Japanese light novel series written by Reki Kawahara and illustrated by Abec.

The series occurs in the near future and focuses on the protagonist “Kirito” Kirigaya Kazuto and Asuna Yuuki as they play through various virtual reality MMORPG worlds. At the launch of the game, 10,000 people had connected themselves to the virtual reality of Sword Art Online. The plot takes a twist when people realize that they can’t quit the game.

Protagonist Kirito, a pro gamer and was present for the beta launch of SAO, starts planning to clear levels as soon as possible. Throughout his quest to finish the game, he meets many friends and also a love interest, Asuna.

The plot and the whole premise of the show are remarkably unique and quite believable in some futuristic sense.