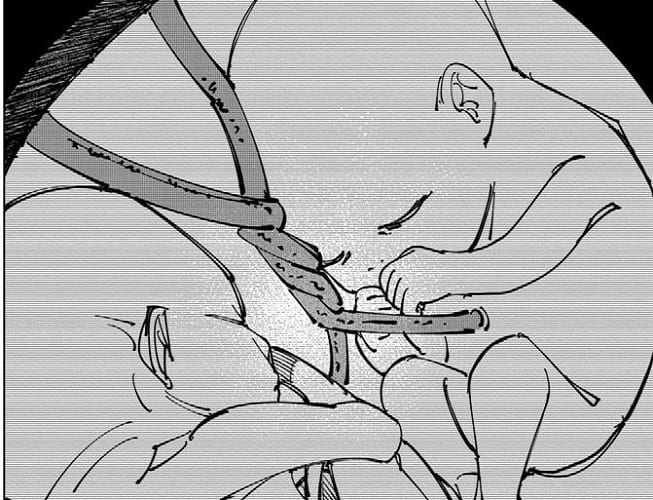 This article cannot have a better opening than Jujutsu Kaisen chapter 148 did, thanks to Maki-senpai.

Ever since Naobito Zen’in’s will declared Megumi the Zen’in clan head, we had some speculations. It was obvious that the in-family politics will churn out different reactions to this piece of news.

While Naoya took charge of this protest, we hadn’t expected Jinichi and Ougi to join in. The title “Perfect Preparation” combined with Naoya being the first panel was an ominous sign enough. Like seriously, I would rather go without seeing his face for a few more chapters, Akutami-sensei.

The chapter left a sour taste in our mouths, while making us emotional at the same time. Let’s get down to it!

We had speculated that Megumi is not the type of person to accept this grand position Naobito so graciously bestowed upon him. And, JJK chapter 148 proved it to be true.

Megumi’s reluctance was a completely understandable scenario. He was an asset this same clan had repeatedly tried to buy off in the past. The clan had never seen him as a person but as a property that rightfully belonged to the Zen’ins. However, Toji Fushiguro had “stolen” this valuable, rendering the clan powerless other than to urge its return. We get that you’re just trying to stand tall while Gojo is the strongest shaman, greedy people!

Besides that fact, he had seen via Maki’s eyes the kind of treatment the Zen’ins provided to the women. Who better to tell you this than the poster boy of misogyny, Naoya Zen’in? In all his appearances, most of it has been either blabbering derogatory comments or fussing about power.

I mean the situation surrounding women is so bad that Megumi decided to tag along with a creepy-looking white-haired guy than go to the Zen’ins. He had to protect Tsumiki from this crap.

All these were valid reasons (other than Megumi’s personality, too) to refuse the blessing he received. Nonetheless, like Maki pointed out, the benefits of this position greatly outweigh the distress that comes along. Access to the cursed tools warehouse, absolute power to command people, and a certain degree of security were just a few of the merits.

Megumi did offer Maki to be the head…but let’s talk about that later!

Well, the first merit did come back to bite them in the chapter, did it not? I wish I could just curse the Zen’in men in the next section. But, let’s keep our heads calm and discuss their strategy first.

The Three Musketeers of greed also have three problems to deal with: Maki, Mai, and Megumi. The biggest problem, however, is to execute all of them in one comprehensive blow. And so, they probably racked their pea-sized brains. Pea-sized is a grace, just saying.

As we said before, Gojo’s sealing has huge repercussions not just between curses and shamans but between shamans too. In Gojo’s absence, a lot is possible – for vile people, that is. The single dependable thread that ties all of them together is Gojo Satoru, as Ougi, Naoya, and Jinichi successfully figured out. The three of them cleverly used the sentence passed over Gojo, declaring him a criminal to their benefit.

With all the fortune in Megumi’s hands (mind you, these people care more about that), they knew that Maki would come to fetch the cursed tools. So step one was simply to injure Mai and Maki within closed walls, at the venerable hands of their father. All then would be left is to kill Megumi, blaming this killing against the conspiracy to free Gojo.

Truly rotten to the bone. We already know that the jujutsu authorities despise Gojo’s eccentricity. They would rather listen to three power-hungry men than believe the students Satoru himself looked after (excluding Mai). So, if three heads were cut in the name of a conspiracy favoring Gojo, they would conveniently overlook that.

For a blockhead, Naoya sure pointed out another important thing. Ougi killing his own children would add credibility to the party of three. It might have been easier to kill Maki and Mai but to go after the newly-appointed clan head? Surely, outsiders would see it as a clash for power. This speculation would surely sully their names and make it harder to kill Fushiguro. They sure care about image and all that, huh?

BUT Ougi killing Maki and Mai would mean that they are so devoted to stopping harm befalling jujutsu society that they even sacrificed their own blood. Going after Megumi with such a grand and “noble” start would definitely bring them and their stand the favor of more people.

You can’t imagine how much can three men frustrate and annoy you in a single chapter: a guide by the Zen’in men.

Anyway. moving on to something from Jujustu Kaisen chapter 148 that must be discussed:

The cover of Jujutsu Kaisen chapter 148 was enough to tell us that this relationship is pivotal. The bond between Maki and Mai today is what remains after a beautiful one rots away.

Mai was never shaman material. This statement might seem brutal, but it is true. Yes, she has her ability, but it cannot take her to great heights. Despite Maki being the one unable to see curses, she was the guidepost for Mai. But she chose to become a shaman without possessing any cursed technique. Maki and Mai are twins that fall on near opposites of the spectrum. One wants to prove her worth, and the other accepts the worth decided for her.

The differences in their values only probably grew over time, and they came to an impasse. But, even after harboring unspeakable feelings about each other, they hold love and care too.

As it is always the case, and if it wasn’t clear enough from this chapter, their parents never gave them love. This chapter was a painful reminder that the Zen’ins don’t see people as people — only assets to climb up the ladder. Or stagnate on the lower rungs, like Ougi. All the sisters had was each other to rely on and care for.

No matter how foul their words seem, a single line “Why did you come here?” from Mai was enough. She was never made to measure up to a shaman, and she never thought she would have to measure up to her cool sister. And as for Maki, despite her life being in danger, she first noticed her sister lying injured. So, injuring Mai was a sure-shot way of holding Maki down emotionally, even if just for a short period of time.

What ensued after that is well-known to all of us. An intense swordfight between father and daughter, both fighting for their places. We can clearly see that Ougi’s skills are no joke. He also successfully injured Maki who had barely recovered from her Shibuya injuries.

Coming back to why Maki rejected Megumi’s offer to be the clan head.

Maki is amazing. Truly amazing. She stands firm amongst shamans blessed with the techniques everyone desires. In our eyes, she has earned more than twice the value she set out to. However, even though people hold Maki in high respect, she still thinks she falls short.

She feels she isn’t enough to take the position of the Zen’in head so soon. And her reasoning? She wants to create a place where Mai feels she belongs. She is still incapable of doing so, incapable of protecting her sister. Her training and pushing herself to prove her worth are not all that selfish.

She is still trying to be the guidepost to Mai in her own way. Someone pass me the tissue box, please.

Well, we trust Maki-senpai! We saw how scary a fully honed shaman with Heavenly Restriction could be before. Toji still has the Zen’in clan dancing on his palm after his death. So, if Maki realized that potential, she would be truly unstoppable. Naobito is turning in his grave as we speak.

What will come further after JJK 148?

We saw one good-for-nothing father, two injured daughters, three greedy men in Jujutsu Kaisen Chapter 148 – what can we expect ahead?

First things first. I am sure that Megumi and especially Maki were wary of a confrontation. There is no way she thought she could just waltz in and exploit the warehouse. Although she may have been taken by a surprise, but I am expecting her to get back up. She just cannot lose so easily. We may also see Mai working up some courage to stand up to Ougi alongside Maki. Well, did we see Ougi shed some crocodile tears at the end of the chapter? Who knows.

Secondly, Naoya’s conversation with Jinichi made one thing clear. There are two factions in the Zen’in clan now: supporting Megumi and against Megumi. Until now, it is possible that we only saw the actions of the latter half. The members of the Zen’in clan must be well-aware of the cheap tricks some people might employ to sabotage Megumi. So, we might see some more action.

Personally, it would be really anti-climatic if Megumi himself showed up. Maki and Mai must find a way out of this stronghold – both literally and metaphorically. If both of them do so, it will be a great thing to look forward to.

Here’s hoping to see some more family politics in the coming chapters and Maki and Mai in full swing! Until the next one! Jaa ne.