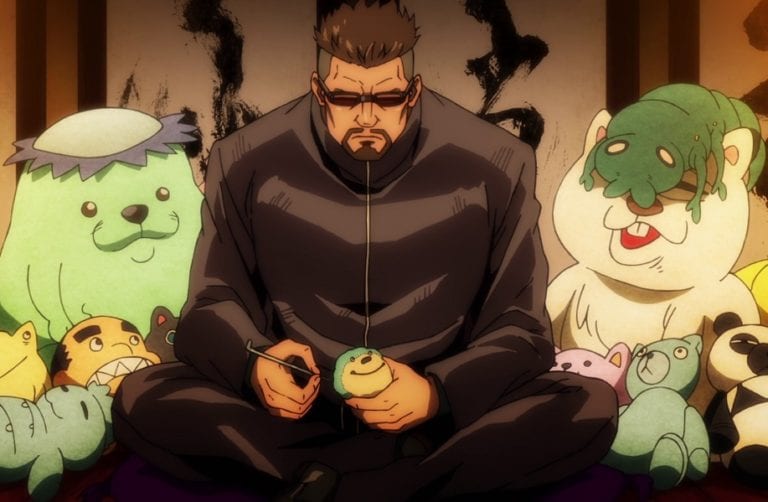 The previous two chapters of Jujutsu Kaisen had a lot of information on The Culling Game. We expected chapter 147 to continue in the same vein. However, it seems that Gege Akutami has decided to clear up the fate of a character who has been missing after the Shibuya incident; Masamichi Yaga.

Before going through the article make sure to read the official release on Viz and Mangaplus!

The Jujutsu higher-ups had branded principal Yaga a traitor after the Shibuya Incident; releasing an order for his execution. He had been on the run since and did not make an appearance in the series along with Panda. However, Jujutsu Kaisen chapter 147 clears up their whereabouts and what happened to him eventually!

There might be a slight confusion regarding the timelines in this chapter. The proper flow is something like this: Yaga in prison –> Sometime later Yaga becomes the principal –> He helps out Kusakabe’s sister –> Events in JJK manga –> Shibuya incident –> Panda gets captured (?) –> Yaga leaves hideout after bidding farewell to his cursed corpses –> He encounters Gakuganji and then meets his end!

For a second it felt that Yaga had been apprehended by the Jujutsu Higher-ups after the Shibuya Incident. However, Yaga’s prison term seems to be a thing of the past. It seems to have happened around the same time that Panda was created. He was officially recognized as a special-grade shaman and sentenced to indefinite imprisonment. The reason? Yaga was able to create self-sustaining cursed corpses like Panda.

The higher-ups saw Yaga’s technique as a huge threat because he could intentionally produce an army of such cursed corpses whenever he wanted. They wanted to know the secret behind Panda’s creation and tasked principal Gakuganji to extract the information. Yaga, however, claims that he has no idea about it! He was probably let go because there was nothing to hold him in the prison.

The question that comes to mind is this. If Yaga was indeed apprehended in the past and Jujutsu Higher-ups felt that they needed to keep an eye on him; then why was he allowed to hold the position of principal at Tokyo Jujutsu High? Well, one could say that the best way to keep an eye on Yaga was to make him a Principal. The way we see it, he spent most of his time inside the school grounds. Monitoring him couldn’t have been easier!

However, this dosn’t stop him from creating more cursed corpses like Panda. It goes without saying that he definitely held back the information from the higher-ups. Seems like even Yaga doesn’t trust them enough. That brings us to one of Yaga’s cursed corpses and Kusakabe’s sister.

Panda was captured by the higher-ups in order to lure Yaga after the Shibuya incident. This does not match with the info in the previous chapter, where Maki mentions that she will meet up with Panda after collecting the cursed tools from the Zen’in clan. Was Panda captured after the incidents of chapter 146? Or was Maki not up-to-date with the incidents?

That aside, Kusakabe appears out of nowhere in Jujutsu Kaisen chapter 147 to be Panda’s savior because of the debt he owes principal Yaga.

Yaga had created a perfectly independent cursed corpse named Takeru based on Kusakabe’s deceased nephew (sister’s son). This cursed corpse acted as a hope for Kusakabe’s sister and saved her in a way. And due to this Kusakabe felt forever indebted to Yaga!

This only proved that Yaga continued creating perfectly sustainable cursed corpses. The reason for this is unknown. It could have been an interesting pass-time for him. Because Takeru and Panda are not the only perfect cursed corpses he had created.

Yaga and his cursed corpses:

Cut to the present; Yaga is seen talking to Takeru in his apparent hideout. Let’s hope you didn’t miss the Christopher Robin reference there. Was it a reference though? This forest is protected by Tengen’s barrier so could it be somewhere close to the school grounds itself? An execution order was released for Yaga after the Shibuya incident, it would make sense for him to hide. A sad Yaga bids farewell to Takeru in his own way.

Yaga seems to have gotten a whiff of Panda’s capture. He could have made up his mind to go release him from captivity and face his fate if needed. He was probably not aware of Kusakabe’s actions.

While Yaga was about to leave his hideout, we see a bunch of cursed corpses telling him that they will be lonely. Yaga sure was keeping busy making these perfect cursed corpses. These corpses might play an important role down the line because otherwise, it wouldn’t make much sense to introduce them. However, barring Panda, none of the others seem to be made for combat purposes (we could be wrong about this though).

While Yaga was on his way to meet his “son”, a mysterious new character stops him (a weird combination of Kakashi and Rock Lee). He asks him to reveal the technique of creating a perfectly self-sustaining cursed corpse. Gakuganji has also accompanied this new guy to the rendezvouz point.

The fight between Gakuganji and Yaga has been skipped and the latter is shown lying defeated and in a bad state. Making sure that the new guy isn’t around, Yaga reveals the secret of revealing a perfect cursed corpse to Gakuganji. The old geezer was surprised at this. He asks Yaga why he chose to sacrifice his life instead of just revealing the secret and living on. According to Yaga, this was a curse from him that Gakuganji will have to carry for the rest of his life! He then succumbs to his wounds.

Panda arrives at the spot after Yaga has died. Gakuganji takes up a stance to fight him, but Panda brushes him aside saying that he didn’t hate Gakuganji. The Kyoto Principal was only a tool for the higher-ups to dispose of Yaga. Unlike normal humans, Panda refused to direct his hatred towards Gakuganji. However, he did cry after seeing Yaga lying dead. This heartbreaking moment shows that even a cursed corpse can have emotions!!

What are your thoughts on chapter 147 of Jujutsu Kaisen. Did you see Masamichi Yaga’s death coming? We sure were more heartbroken for Panda. Let us know your thoughts in the comments section!