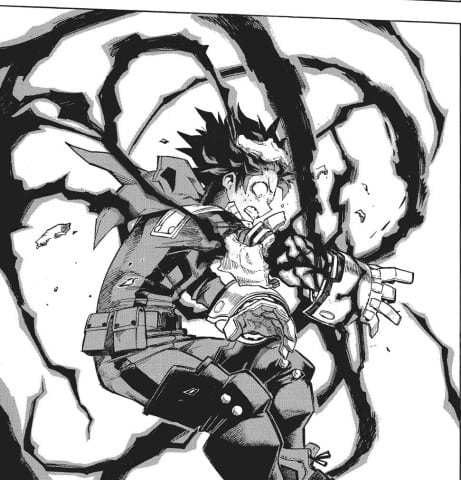 One For All is a pretty powerful and mysterious quirk. After Izuku got the power, he had to relentlessly train in order to get used to his newfound quirk. Still, the astronomical amount of effort he put in wasn’t enough to control even one-fifth of the power. This depicts how difficult it is to control OFA.

So what happens when a new power erupts out of nowhere? What if the vast tendrils of dark energy unleash themselves? In this article, we will be discussing everything you need to know about Black Whip, Deku’s new power.

The following article contains spoilers from My Hero Academia manga. Read ahead at your discretion.

Why does Deku have the Black Whip:

We all know that OFA is the type of quirk which is passed down from one generation to another. And in Chapter 193, Deku saw all the quirk users in his lifelike dream. This all points towards one thing – OFA has a connection between past users and their original quirks.

The quirks of the past users were also stocked in One For All. Meaning it was not just a quirk that relied on stockpiling power, but it also included the quirks of its previous users. Daigoro Banjo was the fifth user of OFA and a pro hero in his time. The black whip is his original quirk and it got stored in One For All as he passed it down. And Deku was inadvertently able to tap into this quirk during a difficult moment.

Banjo describes Black Whip as a top-grade quirk (in Chapter 213). The quirk grants the user to fabricate black tendrils from their body and command them at will. Its raw power and efficiency are directly linked to one of the human emotions – anger. So, the greater the anger, the stronger the quirk.

How did Deku activate the Black Whip:

The primary reason why Black Whip erupted out of Deku was because of anger. During the Joint Training Session of Class 1A and 1B, the power manifested. It was amidst the fight of Deku vs Monoma which caused this. Deku’s team was on the verge of losing and Monoma was intimidating him so that he could fall prey to Shinso.

Due to the intimidation caused by Monoma and Deku’s thought of capturing him, Black Whip emerged. Although the power of the quirk was enormous and he wasn’t able to control it. So Shinso used his ‘brainwashing’ quirk to stop the Black Whip.

The inclusion of Black Whip in Deku’s OFA can drastically change his combat style. Now, his attacks can have more variety and he can become more aggressive as well as defensive. The new quirk can also increase his mobility and put his anger to good use in fights. But all that rests on the notion that Deku trains and uses his newfound power effectively. So that he is also able to save people from danger using Black Whip, which he actually did.

When Natsu was taken as a hostage by a villain Ending, the innocent civilians also got thrown into the action. This was where Deku used his newly manifested quirk to save the bystanders.

Against the League of Villains, Deku strangled Shigaraki in mid-air so that he can not use his destruction quirk to hurt others. It was done through a combined effort of Black Whip as well as Float, Nana’s quirk.

It is also important to note that how this new quirk directly affects All Might too. All this time, he was mentoring Deku about OFA in a very coherent manner but this newfound power changes that. After exhausting his OFA, he wasn’t able to be a full-time hero and save people as he did before.

So to compensate for that guilt and responsibility, he focused on honing Deku as a better hero. But the manifestation of this new quirk considerably changes that too. Because how can he guide young Midoriya to be a better hero if he himself completely doesn’t know about OFA.

However, this will lead to Deku relying more on himself and we might see him progress further on his own. In a way, it puts more burden on him and takes away the responsibilities from his peers and teachers. But hey, this will also lead to a great development in his character which is reflected in the recent chapters. The Paranormal Liberation Arc acted as catalyst to the ‘change’ that happened to Deku as well as AllMight.

Last but not the least, a final important question. It has already been established that how superior OFA is in terms of raw power but was there any reason to make it more powerful? Long answer short, yes there was.

Shigaraki was a beast on loose chains in Paranormal Liberation Arc. He along with the League of Villains were enough to tackle hundreds of heroes together. Even the likes of Endeavor and Hawks were facing problems against them. In order to have a balance between heroes and villains, Black Whip was necessary.

If it wasn’t for the quirk then several cities would have been demolished. Deku used it to take the fight in mid-air so that Shigaraki couldn’t use his quirk. In addition to that, it also opens a new way to explore OFA and Deku as a hero.

What do you think about Black Whip? Let us know in the comments.

What Exactly Is One For All In MHA? Explained