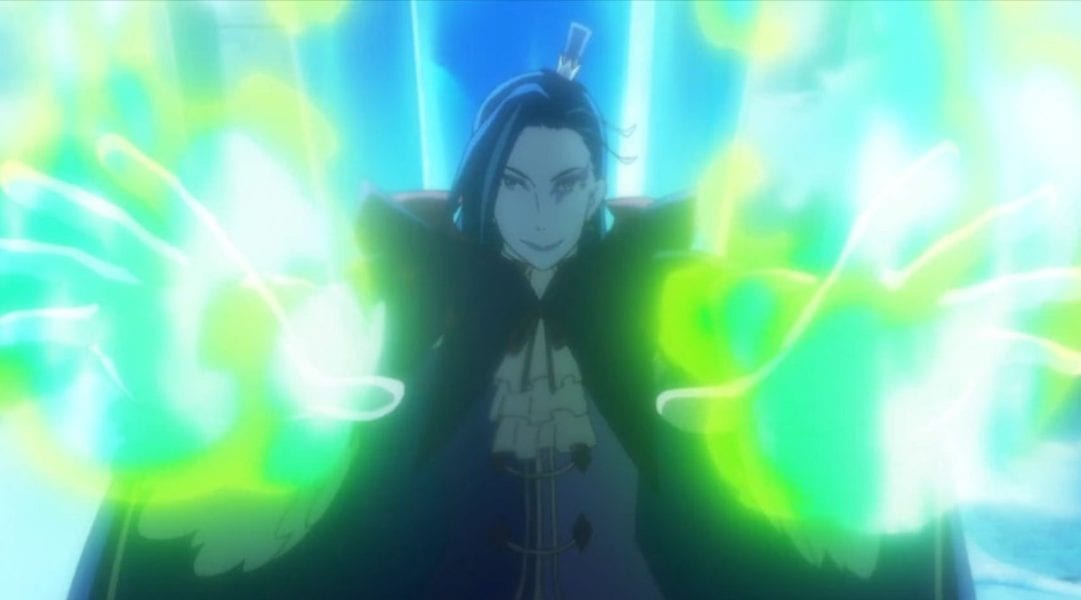 There is absolutely no way that a Re;Zero fan views snow and rabbits the same way after going through what happened in the sanctuary. When it snowed in the sanctuary, there was this misconception that Emilia’s magic had gone berserk. It is only natural to develop that line of thinking right?

So, it came as a pleasant shock to find out that Roswaal was the real culprit behind the snowing in the sanctuary. What was so bad about the snow you ask? Nothing in particular. It just attracts some uninvited cute rabbits that leave death and destruction in their wake. Or to be more precise, they leave nothing behind. Remember that scene from Season 2 Cour 1 where an empty Sanctuary greeted Subaru. Not a single person left alive.

Now to address the important question. If the outcome was so bad that Roswaal himself would die, why would he make it snow in the Sanctuary? Sure it was in the Gospel, but what did this move achieve?

To answer in short, Roswaal made it snow in the Sanctuary because he wanted to push Subaru into a corner. He wanted to force Subaru into leaving everything behind and focus on protecting Emilia and Emilia alone. Let’s try to understand his thought process in detail.

Contents hide
Emilia’s role in Roswaal’s endgoal
Roswaal wanted Subaru to be like him
How does making it snow in the Sanctuary help?
However;

As we mentioned in one of our previous blogs, making Emilia the ruler was just a means for Roswaal to achieve his real goal. However, Roswaal did not believe that Emilia had the mettle to become the ruler by herself. He pitied her for being weak. Roswaal was sure that she would not be able to complete the daunting tasks in her path. He wanted her to have an able ally. That’s why he engineered the situation to make Emilia and Subaru meet.

Wait? Engineered the situation? You mean…

Yes, you read that right. Roswaal hired Felt to steal Emilia’s insignia. And then hired Elsa to steal it. Emilia and Subaru met because of these incidents. How did Roswaal know this would happen? Look no further than the Gospel or the Tome of Wisdom that Echidna gave him. This Tome of Wisdom tells the user about their future in a roundabout way and instructs them about the actions they should take in order to achieve that future.

It would be safe to say that Roswaal was blindly following the instructions that he received from the Gospel.

Once Subaru had committed himself to Emilia’s cause, Roswaal decided to test his resolve. He left the mansion for the Sanctuary when the Witch Cult attacked; leaving Subaru and company in deep trouble. When Subaru came out victorious, Roswaal deduced that he had some sort of unique ability that aided him. But while he was convinced of Subaru’s ability, he was not a fan of the latter’s character.

Subaru always tried to save everyone who was there around him. He did not leave behind the maids in the mansion or even the villagers of Arlam when the Witch Cult attacked. Understanding this, Roswaal came to the conclusion that Subaru was not as committed to Emilia’s cause as he should be.

Roswaal wanted Subaru to be like him. To be someone who wouldn’t have second thoughts before trampling over the lives of others to achieve their goals. In short, Subaru had to be a devil just like Roswaal.

Roswaal had no regard even for people closest to him as long as he was following the writ of the Gospel. He killed Ram and Garfiel in Season 2 Cour 1 so that he could talk to Subaru privately and confirm his hunch about Return by Death. It was a huge gamble to take. But Roswaal took it nevertheless, without even the slightest concern over what might happen to Ram. This attitude is seen again when he hires Elsa to kill everyone in the mansion including Beatrice.

Roswaal wanted Subaru to be devoted in a similar way to his objective of aiding and protecting Emilia. That said, how does causing it to snow in the Sanctuary help?

How does making it snow in the Sanctuary help?

Changing the weather requires a lot of mana. By making it snow in the sanctuary, Roswaal made sure that the Great Rabbit got attracted to the mana that was being expended in the process. But the Great Rabbit was not the only threat he unleashed. Acting on the Gospel’s message, Roswaal also hired Elsa to attack the mansion at the same time.

This was a brilliant move by Roswaal. Subaru was now forced to choose one of these two to save. The Sanctuary or the Mansion. If Subaru does end up choosing to save the people in the mansion, he would come back to the Sanctuary to find everyone, including Emilia and Roswaal himself to be dead. Being aware of Subaru’s Return by Death (well not completely), Roswaal was sure that he would just repeat the loop if Emilia died.

The invasion of Great Rabbit and the snowing was important because it would force Subaru to be on Emilia’s side even more than ever. The snowing would obviously be attributed to Emilia’s powers going out of control, driving a wedge between her and the villagers. Already bereft of confidence and with no Puck or Subaru to help her out, such a situation would definitely break Emilia. Well, we do see her broken in one of the loops where she gives Subaru the kiss of death!

And the Great Rabbit is not a foe that Emilia could take down alone. Maybe Roswaal could have defeated it, but he would not do it. Why? Because if he ended up defeating the Mabeast, then Subaru won’t be in a bind anymore.

This was the complete extent of Roswaal’s plan in the Sanctuary. Make Subaru more like himself. Make Subaru understand that there was no option left other than protecting Emilia and letting go of the others. He wanted Emilia to rely more on Subaru too. By doing so, Roswaal would be able to control Emilia, by using Subaru as his stooge. The clown would be the ultimate puppetmaster!

This is what Roswaal wished for. He thought he could force Subaru into submission by putting him in a tight spot. However, he misread the situation slightly. The first miscalculation was Roswaal’s unclear understanding of Return by Death. The second was “nakama no chikara” (read Otto) which is a common trope in most mainstream series Emilia’s tremendous growth as a person.

Subaru’s never-give-up attitude, his Return by Death ability and conviction to make things go right eventually helped him overcome the obstacle-laden path that Roswaal prepared for him. He was able to make Emilia grow more confident in her abilities while being able to save both the people at the Sanctuary and the mansion.

We could say that Emilia’s growth as a character greatly took the load off his shoulders. He was able to focus on saving the sanctuary because Emilia stood up to the task of clearing the Trials of the Sanctuary. Most of Roswaal’s plan also relied on Emilia being a weak person who would find it had to stand on her own legs. But Subaru was able to beat Roswaal’s calculations here.

True, it was not an easy job. He had to go to great lengths to make Emilia believe in herself. But once she learned about her past, and understood what was expected of her, Emilia came around and delivered in an excellent manner. This aided Subaru’s plan in a great way.

Do you think Roswaal’s plan to make it snow in the Sanctuary was simply brilliant? Were you able to deduce what he was upto? Let us know your opinions in the comments section!