How Sakura Changed Yato In Noragami? A Heartfelt Analysis!

Sakura was Yato’s first 'very own' Shinki. She was the one who gave Yaboku the name Yato, after misreading the kanji of his name. But Sakura would not just change this young deity's name but also the path that he was on. 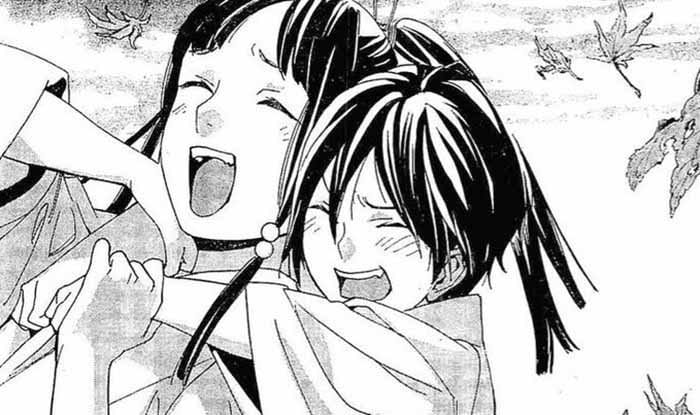 “Gods are born from people’s wishes”

In Noragami, the concept of “why Gods exist” has been elaborated in a very realistic manner. They exist because people wished for them. Humans needed a savior and these Gods heeded their call. In Shintoism, there is a belief that everything has a life and every wish can be shaped into a deity. It is a God’s job to fulfill that call for help.

Yaboku was born from his Father’s wish of “a cull” of humanity and “discord” in the heavens. That is why since childhood, he has been thinning the herd mercilessly with his nora Hiiro. However, things take a turn when Sakura comes into Yato’s life.

Sakura was Yato’s first ‘very own’ Shinki. She was the one who gave Yaboku the name Yato, after misreading the kanji of his name. But Sakura would not just change this young deity’s name but also the path that he was on.

Yaboku was the God of Calamity who knew only to take things from people. He had no moral sense whatsoever. He knew nothing about good or bad. Father had instilled the belief that everything he did was right. And Yato took it to his heart. After all, Gods can never be wrong.

Father had raised Yaboku to feel no emotions. He knew nothing of sorrow and pain. A human child or a Holy Spirit- no matter who it is, must have some sense of morality. They learn these qualities from their parents and their surroundings.

Father never let Yato develop emotions. He was sure that these emotions could lead him astray from his goal. But Sakura, somehow showed up at the right moment to instill in Yato a distant sense of good and evil. She wanted to bring a change in Yato’s “divine nature”.

Sakura becomes aware of Yato not having a moral compass when she witnessed him steal food from others. She chastised him for stealing food and encouraged him to play with human children. She understood that he knew nothing about how the world functioned.

However, when Yato misinterpreted this and took Sakura out to play as he did with Hiiro, she was shocked. All he wanted to do was to make Sakura happy. But unable to digest what the young deity did, Sakura abandoned him.

If Sakura hadn’t returned, Yato would never have found his purpose as a God of Happiness. But, after having a heart to heart with Tsuyu, she comes back. This time she took it upon herself as Yato’s shinki to make him use his powers for the good of humanity.

And the first change that she brought in Yato was to view things differently. To comprehend good and evil. To understand that even a God of Calamity can protect people for a change.

Sakura made her utmost effort and taught her master the meaning of death. She tasked him to stop killing and lend a hand at helping people survive a little longer.

Yato was summoned to cull humanity and so, an appropriate weapon for such a God should be a sword. Be it Hiki, the Nora or Sekki, the blessed vessel, as Father pointed out-Yato’s Shinki are all weapons. No matter how much he tries to change his “alignment”, he is only suited “to kill”.

But Ouki, Sakura’s weapon name proved him wrong. She is the first who altered this notion that not all swords and knives take life. Sakura showed Yato that a Koshigatana– a short sword used for seppuku(suicide) can also save lives.

She helped him save a man who was being dragged by his horse. The innocent child, initially thought to kill the horse but Sakura stopped him and told him to cut the rope instead. Through this, Yato began to have second thoughts about killing people with Hiiro.

Seeing that helping people brought him more happiness, Yato’s divine nature began to change. He slowly began to come out of Father’s shadow and understand the world of men.

To speak the truth, every God wants a Shrine of their own. It is a symbol of utmost respect and reliability from a mere human to an Almighty. A sacred place to convey the purpose of a certain God to exist. And Yato being a minor God was only entrusted with a single wish that is from his mortal Father.

To have a Shrine for himself, Sakura told him, to respect every wish no matter what it may be. He took this to heart. And even after Sakura’s death, Yato has been staying true to this wish.

Sakura’s influence gave birth in Yato a new purpose. He left his past self and took on a new path of a “Delivery God” to fulfill the wishes of people who need help for an offering of 5 yen.

Be it cleaning toilets or helping out to change flat tires, Yato respects every wish that is made to him (well, it is also partly inspired by the joblessness scenario). This behaviour takes root in the advice that Sakura gave him. And it continues even after Sakura died.

Little Yato was too young to comprehend how important a Shinki was to a God. He didn’t know why he had to see Sakura’s horrifying memories when he gave her a name. He had no idea how to treat them and how to care for them.

After Yato had to kill Sakura with his own hands, he realized a whole different world exists other than his own world of indifference. He saw in Tamanone aka Sakura’s memory how much the world of men lacked justice. He was horrified by how much weight a Shinki’s past life name can carry. Yato understood how much a God is responsible for every people’s life.

From the failure he faced before Sakura, he started naming his Shinkis using the “ne” suffix as a cruel reminder. When Yato took in Tomone and Yukine, he was pained by their misfortunes. He wished he could have given back Tomone to her daughter and saved Yukine from his father.

Even though he failed, Yato continued to carry forward the hope that Sakura had instilled in him. That he too could be a God who could one day bring happiness to people.

Yato’s Path to God of Happiness

Yato’s journey to becoming the God of Happiness would not begin in earnest until he meets Ebisu in Yomi. It was Ebisu’s death that pushed him to realize his place as a God. But centuries ago, Sakura had already let the seeds of his innate nature take root in him. She nurtured a part of him, which even he didn’t know existed in him.

It’s true that Sakura taught Yato to serve humanity and respect every wish. But then she was only accentuating a feeling that was already there in him. Yato wanted to keep everyone happy. That was his innate nature. Sakura just put him in touch with it.

When Yato went out to play with Hiiro, he thought about making Father happy. In a way, we could say that Father was trying to suppress Yato’s true nature and manipulating him to do his bidding.

Considering the situation he was in, Sakura might have done the most important thing anyone could do in Yato’s life. She helped him realise what he wanted to do as a God. And that’s what made him turn over a new leaf.

Sakura was a short-lived spirit like the short season of cherry blossoms. She was the necessary “Guide” for Yaboku. She wanted a lot to convey to him in her short life but fate befell her. Sakura was a soul the Gods failed to protect- twice. Yet, she was the one who wanted to help a God become the source of people’s happiness.

Hiyori Iki, a mortal saved Yato from a bus accident and Sakura, a spirit saved Yaboku from ending up alone. Both of these souls wanted to protect Yato with their life.

But Sakura couldn’t be saved. So, when he met Hiyori, she became his reason to value his life. Yato clearly sees Sakura in Hiyori, albeit subconsciously. Even when he met Izanami, Yato saw her as an amalgamation of Hiyori and Sakura.

Sakura was the mother figure who could have made Yato the “God of Happiness” in no time. She had the wisdom of a proper guide and a bottomless nurturing heart. But her role got entrusted to Yukine and Hiyori. It is only time who can tell what the future holds.

Yato the “night diviner” was supposed to be a revolutionary god by Father. However, can he also be the change who brings justice to the Heavens? Will he ultimately reach his goal to become a God of Happiness? Let us know in the comments below!