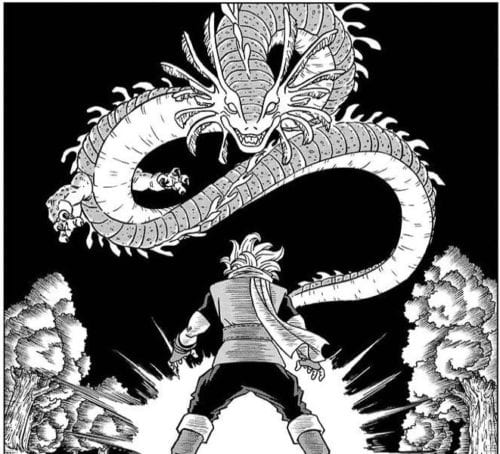 The latest chapter of Dragon Ball Super gave us a lot of lore on Namekians and their origins. With their little backstory in place, we come to the point where Monaito, the lone Namekian on Planet Cereal, says to Granolah that he doesn’t yet have the power to take on Frieza. But vengeance has taken over the Cerealian’s mind as he thinks of using the Cerealian Dragon Balls to get stronger.

It seems the lone Namekian is like the Guardian of the Cerealian’s home planet and had created the wish granting Dragon with only two Dragon Balls.

Contents hide
Why only two Dragon Balls? A convenient Plot twist?
Granolah summons the Dragon Toronbo
Toronbo might not grant Granolah’s wish
Scenario 1: A repeat of the scenario of Vegeta’s failure to achieve immortality on Namek
Scenario 2: The Cerealian Dragon may not be capable of granting the wish
Verdict

Why only two Dragon Balls? A convenient Plot twist?

In the chapter, Moori gives more explanation on Dragon Balls:

Was this information a convenience to drive the plot? Was there any hint of less than seven Dragon Balls existing in the cosmos? In a filler episode of Dragon Ball, Master Roshi said the Earth had originally only one Dragon Ball.

This one Dragon Ball was huge in size, much bigger than the Namekian Dragon Balls. However, this story wasn’t so accurate since the Legend tells that a bunch of angry Gods divided the one single Ball into seven because greedy men tried to steal it away for their own selfish desires. Someone probably made up this Legend but, it might be possible that this concept might have been used in describing the variations in Dragon Balls in terms of numbers.

Although not officially mentioned yet, the name of the Dragon is Toronbo. Fans were quick enough to decode the name by looking at the summoning phrase used by Granolah and compared it to Dende’s phrase to summon Porunga.

The sky turns pitch black and a sea creature like Dragon appeared. With the goal of avenging his people in mind, Granolah asks the Dragon to make him the strongest warrior in the Universe. Of course, Warriors exclude the Gods, Angels, the Grand Priest and Zeno. The chapter closes with this cliffhanger.

To answer the question asked in the main title of this article, most likely, the Cerealian Dragon won’t be granting Granolah’s wish. The following are some possible scenarios that might happen after the ending of the latest chapter:

Scenario 1: A repeat of the scenario of Vegeta’s failure to achieve immortality on Namek

We all know what happens after this scene. Porunga disappears and the Dragon Balls turn into stones because Grand Elder Guru died. Hence, Vegeta didn’t get his wish granted. What if a similar situation happens to Granolah? What if Monaito dies before the Dragon grants Granolah’s wish? The Chapter 69 gives a hint on the possibility.

Monaito said “When I pass, that’s it. The end. Kaput. The Dragon Balls go with me” and last panel which showed Monaito was him sleeping. What if he dies in his sleep and Toronbo disappears and the two Dragon Balls turn into stones? Monaito is very old. Granolah says he’s over 500 years old. Grand Elder Guru passed on when he was around 500 years old (Birth year – Age 261. Death year – Age 762). So, there is a possibility.

Scenario 2: The Cerealian Dragon may not be capable of granting the wish

Even though they are immortal, each Dragon has their own limits to their wish granting powers. It is possible to estimate that power by referring to the size of the Dragon Balls.

In terms of power, Super Shenron>Porunga>Shenron (The comparison of Porunga’s and Shenron’s power are debatable). Same goes for the size of the Dragon Balls as well. So when it comes to Dragon Balls, size does matter.

Now, when it comes to the Cerealian Dragon Balls, there are only two and are much smaller than Earth’s. They can grant only one wish. They might be similar to Earth’s Dragon Balls as unlike Super Shenron and Porunga; the user need not speak in a certain dialect or language to state his wish.

Comparing the wish granting powers based on size, Toronbo might be weaker than Shenron. Shenron can’t even turn androids into humans, what to speak of making someone the strongest in the Universe. If Shenron can’t do that, I doubt Toronbo could do it. So mostly likely, The Dragon won’t grant his wish and ask the Cerealian warrior to ask for something else. Following this, two possible scenarios might happen.

Scenario 2 (i): Granolah could wish to meet the one who killed Frieza

Granolah’s main goal is to defeat Frieza so he might ask the Dragon on how to get stronger, at least strong enough to defeat Frieza. Then the Dragon might point out to him that a warrior named Goku was the one who killed Frieza and instructs Granolah to go ask him.

Granolah would get excited and ask Toronbo about Goku’s location. If this happens, Granolah might recognize Goku because of his father’s looks and even try to attack him.

Scenario 2 (ii): Granolah could wish to restore his home planet back to normal

The Cerealian race means a lot to Granolah. Obviously he desires for his planet to be back to the way it was before the Saiyans ravaged it.

Monaito said the Namekians created the Dragon Balls for celebrating their Warrior Clan and to help them in need. Any other use of the balls would be selfish (Does this mean wishing anything selfish has repercussion? Dragon Ball GT vibes)

What if Granolah disregards Monaito’s arguments and goes ahead to make the wish? The Cerealian would be overjoyed if such a possibility exists.

So, this leaves with two possibilities: Monaito dying before the wish is granted and Granolah asking for the location of Frieza’s killer. Both possibilities can happen. If Toriyama wants more character development for Granolah, (Which I want as well) he might go with the 1st possibility. If he wants to skip that and go straight to Granolah meeting up with Goku, the 2nd possibility is the choice.

What do you think of Granolah’s wish to become the strongest warrior in the Universe? Will Toronbo grant his wish? What does the future await for the Cerealian and his fated meeting with our heroes? Let us know your thoughts in the comments below!