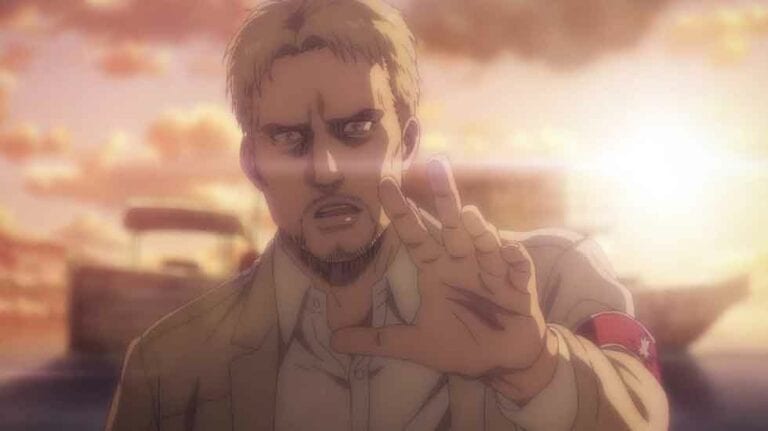 He survived yet again! But to witness what horrors?

Reiner is one of the most well-written and most complex characters in the Attack on Titan series without a doubt. But what concerns the fans (and me) is his apparent inability to die. Is he immortal? Seems not. Isayama just enjoys piling up pain and misery on him.

Poor lad. Guilt-ridden, Reiner was only looking for a way to die. But for some reason, he was being pulled into situations he just didn’t want to be a part of.

Let’s get this straight; Reiner is beyond wrecked, mentally. He is damaged goods. His split personality and suicidal tendencies were proof enough of the trauma he suffered.

Compared to what happened in Attack on Titan chapter 138, it all seems like the tip of the iceberg.

Contents hide
Reiner’s suffering intensifies:
Let’s not forget Annie and Pieck:
Is there any hope left?

Reiner surviving the blast created by Armin’s transformation should come as no surprise. He has the plot armour titan after all. However, what followed was pure pain.

Reiner was supposed to get a hero’s return for having played a more than a crucial role in stopping Eren and the Rumbling. But what he got in return was pain. Pure unbridled pain.

All the people he knew, including Jean and Connie, were converted into titans right in front of him. The Hallucigenia, which had managed to survive the explosion and separate itself from Eren’s Titan form was the culprit here.

The spline-like being caught Reiner’s attention. But before he could do anything about it, the Hallucigenia released a gas that would convert everyone on Fort Slava into Titans, including his mother Karina and even Gabi.

I can’t imagine what might have gone through his mind as he faced the titanized versions of his mother and his friends. It was too cruel. The panel where Jean’s Titan is trying to rip off the armour near Reiner’s nape hits hard. Reiner and Jean had a heart to heart before they set out on this mission to stop Eren and save the world. Look how it turned out to be.

But Reiner was not the only one who was suffering.

Let’s not forget Annie and Pieck:

Annie had spent almost a decade away from her father on Paradis, carrying out a mission she was not interested in the least. The only thing that drove her was the desire to get back alive to her father in Liberio. And in AOT chapter 138, she is finally able to meet him.

But before she could have a proper reunion, Mr. Leonhart was converted into a Titan in front of her eyes. Too cruel!

The same happened with Pieck. She was hoping to spend some time with her father as the smoke kicked in converting every Eldian on Fort Slava into Titans. Does Isayama’s cruelty know no bounds? Is this his idea of trolling us?

Some would argue that the warriors had racked up so many sins that they deserved this cruel payback. They had this coming all along. But in the world of Attack on Titan, what is right and wrong? Good deeds and sins are terms that don’t apply very well here. Morality is all grey in this world (*ends philosophy lecture).

I tried thinking about whatever ‘cruel’ things Annie and Reiner had done. Killing Marco, killing innocent citizens, being responsible for the death of Carla Yeager and even killing off the Levi squad. But still, ALL OF THIS IS TOO MUCH TO TAKE.

It at least comes as a respite that before Mr. Leonhart got converted into a Titan, he knew that Annie had survived. Annie can be happy that she got to meet her father once. The same goes for Pieck.

Let’s not forget that the stakes were super high since the Rumbling started. This outcome of losing close ones was more or less expected. But still, ALL OF THIS IS TOO MUCH TO TAKE.

Is there any hope left?

Annie, Reiner and Pieck being ripped apart by the very people they wanted to protect is hard to watch. But is this really how it ends?

Fans are assuming that Ymir might reverse the Titanization of all the people, now that Eren seems to be dead (Reiner outlived Eren, HAH). But then, that would be a very convenient solution. And knowing Isayama, he may not choose to venture down this path.

A rather gruesome outcome could be the Intelligent Titans sacrificing themselves for their family and friends. Reiner, Annie and Pieck might let the others eat them and turn into intelligent Titans. This cycle will continue until no more pure titans are left.

What are your thoughts on the events happening in the latest chapter? Do you think Reiner and co. deserve what they are going through? Is Reiner immortal? Let me know your opinions in the comments section!!