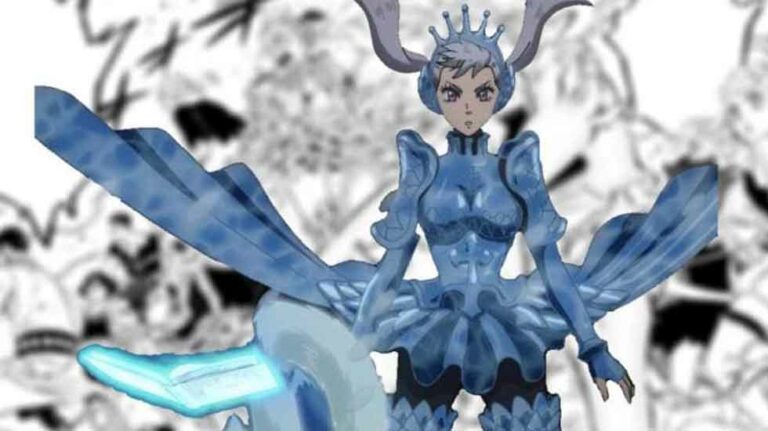 The battle against the Spade Kingdom is heating up! In the last couple of chapters, Black Clover had increased our anxiety about multiple things. The Dark Triad tapped onto 100% devil powers, two new devils rose, and Morris turned into the biggest villain.

As if that wasn’t enough, there were more troubles: two ancient demons rising and many low-ranking devils attacking the citizens.

It was looking incredibly bleak for the Clover Kingdom forces even to make it out alive, let alone defeat the Spade Kingdom. They really needed the others’ support to hold back the storm from completely crushing them. Thankfully, the backup (should I even call them backup?) arrived right in time.

Contents hide
Noelle and the Heart Kingdom forces arrive
The party of oddballs is here too!
Black Bulls to arrive at Spade soon

The last panel of Chapter 283 looks absolutely FIRE! And by that I might mean Leopold right at the front. Well, okay. Certainly not that, but Leopold IS fired up for this battle.

The whole Avengers kind of feel is amazingly done, and all the people look pumped up to fight. Noelle is leading the group of people, which is pretty reminiscent of her mother.

Her mother was always at the frontlines in battles, donning the same magic armor. She even looks as fierce as her mother. The attack mages will surely appreciate Secre and Mimosa’s support. But the most exciting part is if we will see their final showdown with Vanica. Of course, we will, soon enough!

Besides Noelle, we also see Luck and Charmy, who are clearly geared up to beat the devils. Luck is in his lightning form, and Charmy has even shed her normal dwarf form!

The usually serene Gadjah also seems pissed off, accompanied by the other Spirit Guardians, excluding Potrof. It may be possible that Potrof is in the Heart Kingdom as a defense.

Tabata wants us to play ‘spot the characters’ in this panel too! At Luck’s left, we also spotted Patolli. We had speculated earlier that the elves might join the battle, and they did. If Patolli is here, it will be no surprise if Fana, Rhya, and Vetto are there as well.

The party of oddballs is here too!

We were surprised to see some unexpected faces joining the attacking team. These were the accomplices from the Eye of the Midnight Sun arc with a new member, Makusa. Our Dark Lord Sekke is leading this party, so it is definitely the OP team!

It was kind of weird seeing them fight for the Clover Kingdom, but they did use their skills successfully to fend off the devils. They didn’t even need Sekke to unleash his dark side FUHAH! We also saw Makusa’s ability, Snow Magic. How will Sally use her Gel Magic and her weird magic items? I am hoping for some good support from her too!

To top it all off? The Black Bulls! Asta defeated the ancient demon in one stroke but couldn’t figure out how to reach the Spade Kingdom. And when their nakama is in trouble, would they sit still? We are guessing these pairs of legs are Vanessa, Gauche, Grey, Gordon, and Henry.

We surely are missing Magna and Zora, though. Vanessa said that they were training together, but where are they? Will they reach the Spade Kingdom too? I hope so!

It is payback time for taking away their captain! Even if they are mostly united again, it will take some time for the Black Bulls to reach the Spade Kingdom. Until then, it is up to the others to fight against the devils. Just what kind of combination spells will they use?

How excited are you for the next chapter? Read chapter 283 on Viz and comment below!