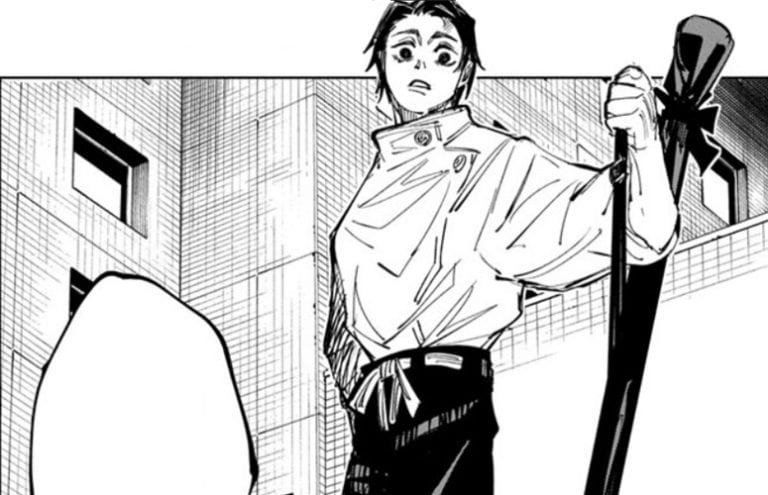 With the events taking a turn on their heads, Jujutsu Kaisen delivered another thrilling chapter on Sunday. In the previous chapters, Yuji got not one but two powerful shamans hot on his trail.

Naoya Zen’in wants to track down Yuji to find Megumi, and in the process, kill him too. His senpai Okkotsu Yuta is determined to kill him as well, but for completely different reasons – hurting his friends.

Well, we completely did not expect to Naoya to show up so soon again! He quite easily tracked down Yuji but seemed disappointed with Megumi’s absence. However, just when Naoya had begun fighting with Yuji and Choso, they felt a chilling presence zip past them. This was none other than Okkotsu Yuta.

Let alone sensing, Yuta’s presence left all three of them shocked. This is actually surprising because Choso is a supreme curse and Naoya is a high-ranking shaman too. Both of them were equally bewildered as Yuji was. A big reason behind this is that his presence felt eerily similar to Gojo Satoru.

“Did he escape?” – this thought might have crossed even Naoya’s mind at this moment. Such a high concentration of cursed energy can possibly match Gojo’s level. Gojo and Yuta are also related, being distant relatives from Sugawara no Michizane, one of Japan’s top three vengeful spirits.

However, Yuji concluded that while the person or thing’s presence was similar to Gojo, it was much creepier. Why?

Firstly, Yuta is an extremely powerful shaman. His cursed technique allows him to draw from his huge amounts of cursed energy. Earlier, he commanded Rika without knowing much about his ability, but he probably is more aware of it now.

Okkotsu still seems to be ordering around Rika (probably a different one). It could be this cursed spirit that adds the “sinister” to his presence.

Another contributor to this creepiness is the fact that Yuta has an enormous killing intent right now. All of it is diverted towards Yuji. Yuta has high regard for his friends, and Yuji is the villain to him at this moment. Whether or not it is due to misinformation, in Yuta’s eyes, Yuji hurt his friends and caused Gojo’s sealing and Yaga’s death sentence.

This intent is completely opposite to that of Gojo. He might have been the most powerful shaman in the world, but he was caring and protective towards the students. Now, just make someone as powerful as Gojo wanting to hunt somebody down. Scary, isn’t it?

The last time someone tried to hurt Yuta’s friends, things did not go very well.

Geto Suguru attacked the Tokyo Jujutsu High in the hopes of killing Yuta and acquiring Rika. But he erred by hurting Yuta’s friends, which enraged Yuta. Geto was one of the most powerful shamans at that time, along with Gojo. Yuta went berserk and drove him into a corner, leading to his death.

As things currently stand, things don’t really look good for Yuji. He cannot possibly fight against two powerful shamans to save himself. However, it will be interesting to see if an opportunity comes along. In Chapter 11 itself, Gojo thinks that even Yuji was of the same kind as Yuta – someone who can surpass him!

It will be interesting to see these direct disciples of Gojo clash. But we really hope Yuji makes it out alive.

Do you have any other reason or theory behind this? Let us know in the comments after reading the latest chapter on Viz!