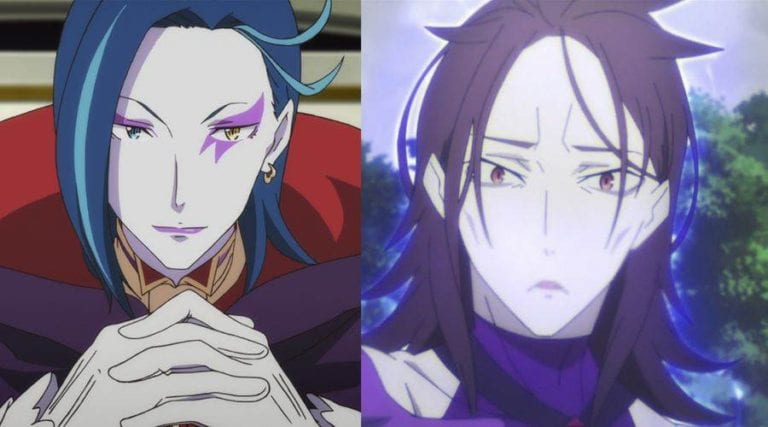 Another Re:Zero episode, another character shrouded in mystery. Last time, it was Pandora who made us scream in agony. This time, the focus has shifted to a new character, Hector, albeit for the same reasons. There is very less that we know about him, but the influence that he has on the story, or rather, one particular antagonist is quite noteworthy.

Re:Zero Season 2 Part 2 Episode 7 revealed the origin of the Sanctuary to the viewers; and along with it, the mysterious Warlock or Demon of Melancholy, Hector. He seemed to be acquainted with Echidna, the Witch of Greed. But their relationship was not amicable, to say the least.

The last we see Hector, he is fighting against Echidna for some reason. He had already defeated Roswaal, who stood no chance against Melancholy’s powers. While the outcome of the fight itself remains a secret; Roswaal’s uncanny similarity to Hector is what caught our attention!

The second cour of Re:Zero Season 2 heavily implied that the Roswaal we see is the same person who lived 400 years ago. However, he seemed to have very different mannerisms back them. He came across as a friendly and caring person. Moreover, he lacked the malicious, scheming look in his eyes.

It is true that time can bring about a lot of changes in a person, especially when you are dedicatedly concocting evil plans to achieve your goals. But, after the recent episode, major doubts were raised as Roswaal’s mannerisms seemed a bit too similar to that of Hector!

Let’s take a look at some of the defining similarities between the two;

Both Hector and Roswaal wear flashy attires. Their clothing is quite striking and eccentric. Moreover, their attires are reminiscent to that of a jester. This is not a similarity that we could ignore easily.

What’s more intriguing is that this change comes AFTER Roswaal’s run in with Hector in Kremaldy forest. Suspicious? Hell yes!

The Roswaal that we see in the flashbacks does not have the habit of extending vowels like he does in the current timeline (daaaaayo ne!). However, there’s another person, who seemed to have that habit back then. Well, no points for guessing. It’s none other than our enigmatic Hector!

We see him resorting to a similar speech pattern in the episode as he talks to Echidna and Roswaal. Was Roswaal inspired by this peculiar style that he decided to make it his own? Seems not…

One of Roswaal’s most defining attributes in Re:Zero is the war paint that he uses on his face. While this makes him look more like a clown, it is also something that makes him stand out in a crowd. That and his speech!. However, it seems that Roswaal picked it up from Hector too.

Hector is seen using paint around his eyes, to match his jester like attire (yeah those are also called bags under his eyes but looks more like warpaint).

One thing to note is that Hector uses the paint in both of his eyes. But in Roswaals case, he only applies it around his yellow eye. That brings us to the next part.

Roswaal’s single yellow left eye has been under scrutiny of the fandom for some time now. Many believed that Hector too had yellow eyes, even though the Light Novels comfortably left out their description.

In the Web Novels, Hector is described as having eyes of a dark hue. Hue could be any of yellow, red, orange, blue or green. However, the misconception around Hector’s eyes was cleared in the anime. He was shown to have eyes that were a dark shade of brown.

But then, why are we even focusing on these similarities you wonder.

Why are the similarities important?

Well, as we mentioned before, the outcome of the fight between Hector and Echidna was not shown in the episode or the Novels. Roswaal was almost beaten to death by Hector in this fight; and yet he somehow managed to survive. This implies that Echidna managed to win the duel.

But even if she did, we can safely say that it was not a landslide victory. Reason? She was running from Hector for some reason. Meaning he was a person to be feared. That said, the erection of the barrier with the help of Ryuzu Meyer could have worked in Echidna’s favor in the fight. And if it did, what did she do with Hector?

Common theories assume that Hector was sealed inside Roswaal. This could have helped the latter overcome his dire physical state too.

This would explain the similar mannerisms between the two of them. Roswaal also seems to have two very distinct personalities at times. It comes to the fore even more in the second season of Re:Zero.

However, the reason for similarities between Roswaal and Hector could also be something else altogether. Roswaal could have copied the mannerisms of his opponent as a way to remember the humiliating loss he suffered at his hands. If this incident is what made him lose Echidna, that would only make sense.

What are your thoughts on the similarities between Hector and Roswaal? What could be the reason for it? Let us know your opinions in the comments section!