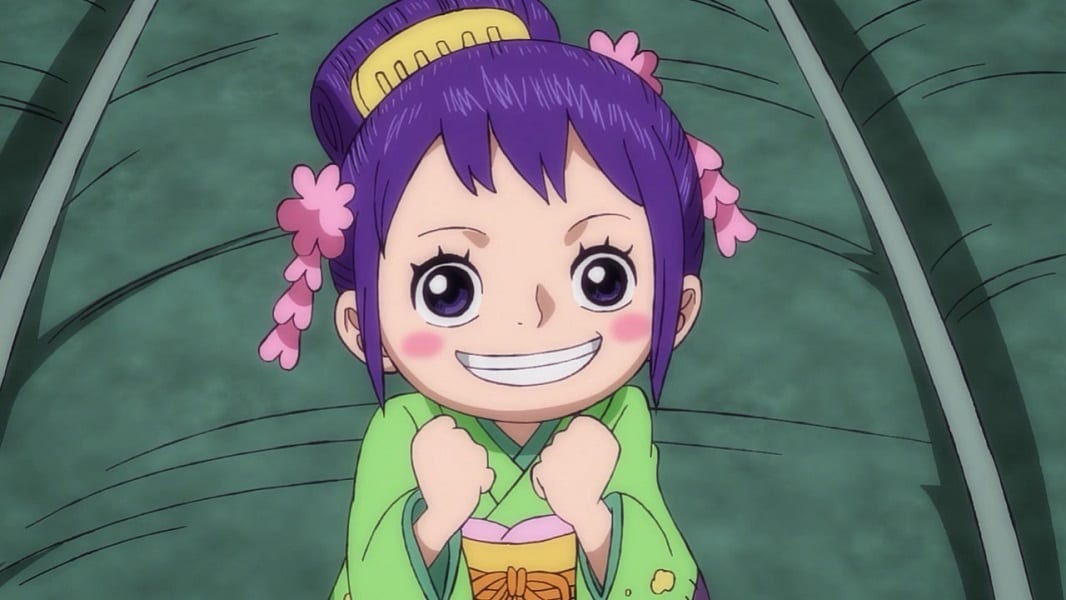 The raid on Onigashima was to decide the fate of Wano. The pirate-samurai-mink alliance gave their all to bring down Kaido. But against the strength of two Yonko, all seemed to fail. Even the raging power of Luffy, Zoro, Kid, and Killer was not enough.

However, in chapter 1004, the alliance said – “here comes the cheat code.” Otama, the girl who can manipulate any animal including SMILE fruit users with her kibi dango. So, the “gifted” soldiers that were serving the Yonko have shifted their allegiance to Tama.

Our girl O-Tama changed the entire scene of the battle. But how this will help in subduing the two Emperors of the Sea? Is Tama’s arrival really a game-changer or is it more on the side of an exaggeration?

How Otama changed the tides?

At one end, we have an army of 500 SMILE fruit users, also known as Gifters. On the other, we have O-Tama who can tame the Gifters. It’s like one side you have your entire savings and then there is the student loan.

The pirate-samurai alliance was outnumbered to begin with. They were a mere 4000 in total and were looking at an army of 20000 Beast pirates. This raid was always a very risky gamble and the alliance bet their lives on it. But The arrival of O-Tama turned the tables in favour of the alliance.

Otama’s devil fruit allows her to make millet dumplings (kibi dango) from her cheeks. When ingested, even the most ferocious beast will become a docile and obedient Pomeranian.

You could see it as a form of hypnosis. As it was shown in the latest chapter, the SMILE fruit users became servant to the will of O-Tama.

If she is able to tame all the Gifters, then all hell will break lose on the Beast Pirates. They will be forced to fight their comrades or should we say, former comrades. Plus, the alliance will gain hundreds of devil fruit users on their side.

So far, we have seen that SMILE users are susceptible to the effects of O-Tama’s devil fruit. But what of the actual Zoan fruit users? Can they too fall victim to her ability? Well, we don’t know for certain. But if that turns out to be true, then this raid is already over.

King, Queen, Jack, and even papa Kaido himself are Zoan users. They all will fall victim to the persuasion of O-Tama. But that’s just a possibility for now but a possibility nonetheless.

Even if the actual Zoan users remain immune to the effects of the special kibi dango, the raid is certainly sliding in favour of the alliance.

With numerous Gifters now on their side, the alliance will now be able to channel their attack towards the Yonkos. There is only that much that the Beasts can handle. The only relevant army that Kaido would have are a handful of Big Mom Pirates.

If all the other warriors which include the Yakuza and the remaining Strawhats arrive on the Skull Dome, then things will swiftly go south for the Yonkos. They are already up against the 4 of the strongest pirates in the flowing seas. Add more to that number and both Big and Kaido might have some big problems.

As of now, it might seem that it’s only a matter time when the alliance emerges with the winning trophy. But the raid is not over, not yet. There are still big league players who very much alive and kicking.

There is King, Charlotte Perospero, Queen, King, Jack, Big Mom, Black Maria, and the list goes on. We must also remember that the 9 Scabbards are all incapacitated.

One also has to consider the possibility of Otama’s powers suddenly coming to stop, just like what happened to Sugar on Dressrosa. If that happens at an unexpected moment, then disaster would strike the alliance!

But for now, Otama has no doubt turned things in favour of the alliance. You know what they say, “strength in numbers.” This sudden change of events will certainly destabilize the Beast Pirates and give a much-required opening to the alliance.

One Piece: What Is Enma? Is It Stronger Than Shusui?

So, do you think O-Tama has changed the tides of the battle? Will she be the one who puts an end to the ongoing raid? Let us know what you think in the comment section below.