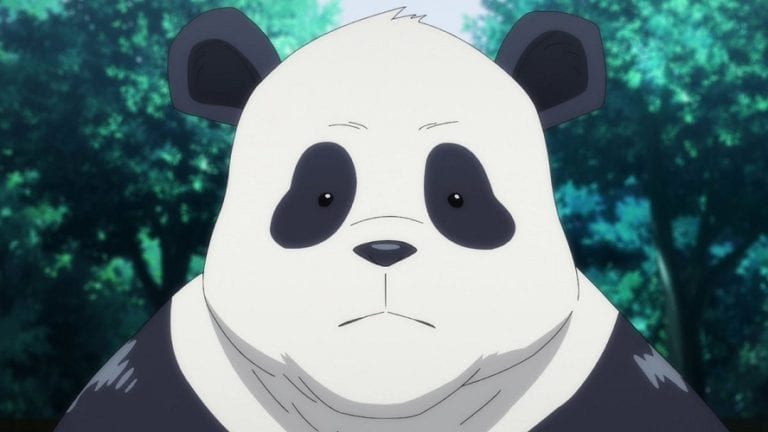 There are a lot of odd characters in the Jujutsu Kaisen universe. All of them make sense only in this story and possibly even adorn the plot by being oddballs. We have a guy who snacks on fingers, a girl who kills dolls, another guy who beats you up based on your ideal type of women, a boy who only loves onigiri, and a panda.

Well, yes. Panda-senpai is a well-liked and relatable character of Jujutsu Kaisen. Like all other pandas, he is adorable, and he cares for his friends. But in Episode 16 of Jujutsu Kaisen told us that “Panda ga panda janai!” I am pretty sure all of us were dumbstruck at this. Panda…is not a panda?

What is he, then? Who is he? Well, worry not! This article will save you from the abyss of confusion.

Panda is a second-year student at the Tokyo Jujutsu High college. He is a semi grade 2 sorcerer. His appearance is like a real grown panda, but he talks and behaves like a human.

Panda is actually an Abrupt Mutated Cursed Corpse rather than an actual panda. A maestro of puppet jujutsu sorcery, Principal Yaga of the Tokyo Jujutsu High, created Panda. However, Panda is different from other cursed corpses.

A cursed corpse is a non-living object endowed with a curse and gains self-control. A cursed corpse we came across in the story is Yaga’s doll that Yuuji trains with. This doll is a simple cursed corpse and does not have its own feelings. It is also more or less controlled by a human for actions like “react when the cursed energy flow is not constant.”

Unlike this doll, Panda is much more than just “a doll.” He was born as a sentient cursed corpse, capable of having emotions. He can also speak and act like humans. Thus, he has the title of an Abrupt Mutated Corpse in place of a ‘cursed corpse.’

When Mechamaru probes Panda by calling him a doll, he states that he is not fond of being a human. He is different from humans and thinks the human species are gross. Sure, they do have some qualities that Panda does not have, but that does not make him want to be human. Instead, he feels satisfaction in being a cursed corpse. Since humans create cursed corpses, they do not have hearts. So, they have ‘cores’ instead.

Being the anomaly Panda is, he has three cores instead of just one. Yaga tells him that he has two siblings inside him. When he needs them, they will lend their power. These cores allow Panda to switch forms as and when the fight demands. However, once destroyed, he cannot go into his other core forms until he recovers. What are these three cores?

Panda’s first core is well… Panda. This is his balanced type form which he usually dons. It is convenient to use and is not volatile to cursed energy. In this form, he is also agile while possessing strength. We see that his punch surprised Mechamaru too. He also has unpredictable movements in his default form.

It is the Monke, RUN! Wait, wrong anime. Phew, this monke does not throw rocks. In Episode 16, Panda dons his Gorilla Mode. This mode is most suited to short close-range fights.

Panda’s brother is hyper-reactive to cursed energy and is aggressive in fights. This form also has a specialty: the Unblockable Drumming Beat. Every attack by Panda in this form “resonates” and hurts the opponent even while they are guarding against it.

It ensures that even with a little weaker force, the impact is as powerful. The hit may be critical, too, if it lands on the opponent’s head. A drawback of this form is that it rapidly drains Panda’s cursed energy.

The third core of Panda’s older sister is under wraps until now. In Panda’s fight against Mechamaru, his older sister’s core was crushed as soon as the fight began.

However, Panda describes this core as a shy and bashful one. We can speculate that it is a smaller form that is sturdy but stealthy. Since Panda is the balance between his siblings, the older sister may be the opposite of Gorilla. But we do not know if this core is alright or not. Panda doesn’t state either, so by “crushing,” we cannot conclude whether his older sister is alive or not.

Other than his cores, Panda also has some other abilities.

Panda is a cursed corpse, so naturally, he has a huge reserve of cursed energy. This cursed energy can envelop his body for both attack and defense. Despite being a panda, Panda is a clever and perceptive fighter. He tries to predict his opponents’ movements to stay a step ahead.

His unpredictability in fights surprise his opponents many times.

Being a cursed corpse, he also has an enhanced ability to take damage. He took on Mechamaru’s Ultra Cannon by himself even though it destroyed one of his cores. His size and weight also give him an advantage in battle while also not weighing down his agility. Panda can also pack a punch which can be compared to Aoi Todo’s strength.

Do you like Panda’s abilities? What do you think is the third core all about? Let us know in the comments!