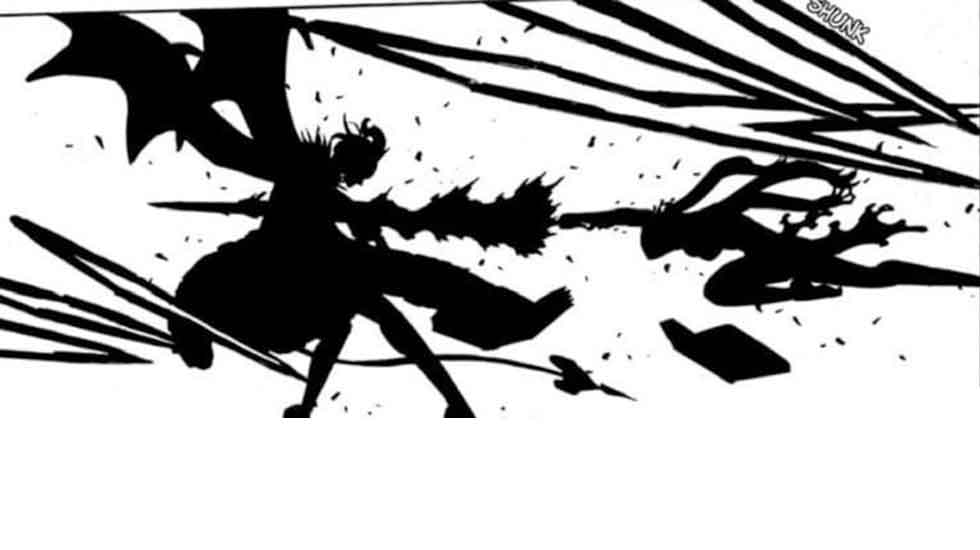 Vanica Zogratis and Noelle Silva share a deep-rooted enmity in Black Clover. You might ask, “haven’t there been better-written stories of enmity in the universe, like the elves and humans?” What makes this fight special, what is different?

The humans v/s elves arc concerned themes like deceit, distrust, unfaithfulness, lies, and especially racism on a magnified scale. But Vanica v/s Noelle is a fight of individualism, ideologies, and circumstances. This clash represents something many of us often face.

These polar opposites seem to be fated to meet. Their clash gives both Vanica and Noelle immense character depth, showing us sides we hadn’t seen before.

It is a battle between a person shunned for most of her life and another who considers herself supreme. On the one hand, we have Noelle, who has lost years to mistreatment and, on the other, the cause of it all.

Vanica is one of the strongest and most sinister villains Black Clover has seen yet. She is a juggernaut of an insatiable thirst for supremacy over opponents in despair. And with Noelle’s mind fixated on winning against Vanica, she undoubtedly was going to become a subject of this rampage.

Contents hide
Previous battle between Vanica and Noelle
Significance of Noelle’s next clash
Can Noelle defeat Vanica?
What if Noelle does not win, and gets cursed in the process?

Previous battle between Vanica and Noelle

It appeared that nothing gave more joy to Vanica than infiltrating the highly-guarded kingdom of her long-suffering victim, Lolopechika, for their second meet. She intended to have a massive fight with her arch-nemesis (who was gonna tell her the true nemesis hadn’t appeared yet?) at the stakes of the kingdom’s citizens.

However, her opponent was not as naïve as she had been when the two of them clashed earlier. She was a queen, after all. Relying on the power and company of her first few friends, she brought a strategy into existence. A sure-shot plan to trap the devilish (quite literally) woman in an unbreakable hold. And the biggest support of this plan was Noelle.

The time for the ultimate faceoff for Noelle had arrived at the doorstep. But none of them knew that there were still miles they had to pass for coming close to beating the collaboration of Megicula and Vanica. The experimental devil not only broke through Secre’s Arcane Magic (we love randomly picking up skills, too) but also cursed the super-powerful and mighty Water Spirit.

Yeah, the plan (and sadly, Lolopechika too) went kaput. But with whatever Noelle had left in her, she went with it to land a blow on Vanica. It triggered certain unpleasant memories in Vanica’s mind as she finally placed Noelle’s origins from history. Vanica had definitely seen this vigor and determination somewhere before weeding it out.

But a single blow was not a ‘win.’ This defeat for Noelle was more than just a defeat. It was a painful reminder of her weakness in protecting what is dear to her. She also lost her chance at realizing her raison d’être: defeating Megicula. Despite this absolute defeat, Noelle hadn’t lost all hope. This is a shounen manga, after all. So you can rest easy knowing Noelle will clash with Vanica again.

Significance of Noelle’s next clash

From where the story currently stands, Vanica and Megicula are the mortal enemies Noelle must unconditionally win over. The happenings here on out will shape Noelle’s character in ways more than one. The reasons for this significance are simple.

Vanica and Megicula took away significant parts of Noelle’s life twice; in the form of Acier Silva and Lolopechika.

Acier Silva was the knight in shining armor for the Clover Kingdom. A valiant fighter and an indomitable woman, Acier fiercely protected the kingdom from the frontlines. She was also exceedingly kind with nerves of steel, enough to clash with the fearsome devil Megicula.

Where others would tremble and save their skins, Acier confronted the menace head-on. And all for a child Megicula had taken captive. Her endeavors were part-success and part-failure – while she took back the child, she traded her life for it. The brave woman succumbed to Megicula’s nefarious curse leaving Noelle not only motherless; but also with a bag of guilt she would carry for years.

Talking of curses, Lolopechika is also one of Megicula’s seemingly long list of victims. Acier’s importance in Noelle’s life might be clear, but how does Lolopechika fit in?

Over the time Noelle spent in the Heart Kingdom with Lolopechika, she realized that even though she is royalty, she need not be upright always. She found a part of herself that she had kept hidden for a long time in the klutzy Lolopechika.

And it is evident that she dearly cherished her friendship with the queen because it gave her comfort that she hadn’t felt before. It was the comfort of vulnerability. We might have a running gag calling Noelle a tsundere, but it is important to remember that it was her coping mechanism against the lashes of cruel words.

Only by shutting her emotions in could she go on, call herself royalty, probably even reiterating “watashi-wa ozokuyo” to herself. Lolopechika tore down these walls by showing her that it is alright to be clumsy and vulnerable. It is alright to open up to people.

But Megicula took away both. Noelle’s harrowing experience is also in the same stroke of paint as Asta and Yuno. They lost their parents to the devils, who also took away the people they most cherished.

For Asta, his only father figure who looked after him since day one, Yami-san. The devil also deeply wounded the Black Bulls, who gave Asta their unwavering support. And for Yuno? The devil took away his precious nakama he had finally opening up to. Unforgivably, the devil also took away William, who spent even the last of his mana reserves for saving the squad.

Kedo shinpai surunai! It might be late, but the poetic justice will arrive. The three pillars of the Clover Kingdom’s future, all from different backgrounds will certainly pay back everything in due time. Nonetheless, there are questions about Noelle’s ability to face Vanica but outright trust in Asta and Yuno. So let’s address the elephant in the room.

Unfortunately, things do not seem to get any easier for our water-fairy. While she is basking in oblivion, the first gate to the Underworld has sprung open. Vanica and Megicula have never been stronger, ironically even more than their clashes with Lolopechika and Acier.

It is up to Noelle to harness all she has learned and acquired as a Black Bulls member and as Noelle Silva herself. This time, she is no longer someone’s daughter, sister, friend, or nakama.

After her initial defeat, her coincidental meeting with the elves will surely prove worthwhile. Accompanied by Secre and Mimosa and learning a new technique of the elves in Elysia will hopefully bring forth an even better Noelle. And this time, she doesn’t have anything to lose, but everything to gain. “What will she gain?” you might ask.

An unshakable belief and conviction in herself for standing up to her mother’s faint shadows and morals. The absence of this belief is the shackle that holds her down right now, and if she defeats Vanica, she can gain freedom from the rearview of her past self.

Although I believe it is only one of her many coming ones, this victory is a concrete step towards a Noelle we all want to see, and she wants to become. Someone who can hold her head high and give a shoulder to people in need.

It is indeed a beautiful tangent of character development. Noelle first broke out from her vulnerable self’s shell when a little girl tugged her skirt and stated absolute faith in her ability. Until that moment, nobody had ever recognized her existence, let alone relied on Noelle.

This reliance gave her the courage to challenge her ‘broken’ magic and help the Black Bulls and grow stronger. And it is this reliance and faith that Lolopechika showed in her that strengthens her will to face the danger of death.

Black Clover has always sent across one message: good persists until it wins. Many fans speculate that Noelle will not win against Megicula yet, but only manage to weaken the devil’s curse by killing Vanica. If Tabata-sensei indeed decides to take a darker route to his usual approach, it will be a thing to witness.

What if Noelle does not win, and gets cursed in the process?

Maybe she even loses Lolopechika.

Well, I believe it will be a downward spiral for Noelle. I don’t want to sound a sadist, but this little possibility opens up new paths for Noelle’s self-exploration. However, I don’t anticipate Tabata-sensei dragging Noelle through any more anguish with the way things have been.

She has barely come to terms with herself (and her siblings, if that counts), and a defeat at this stage would push her back to square one.

I cannot wait to see what Noelle brings to us over the next few chapters. I will leave you with something Asta said long ago, which perfectly fits Noelle. “As you live, you lose reasons and hope. But as you keep on going, you pick up new reasons and hope.”

Until next time! Comment down your theories and speculation about Noelle and Vanica! Jaa ne.