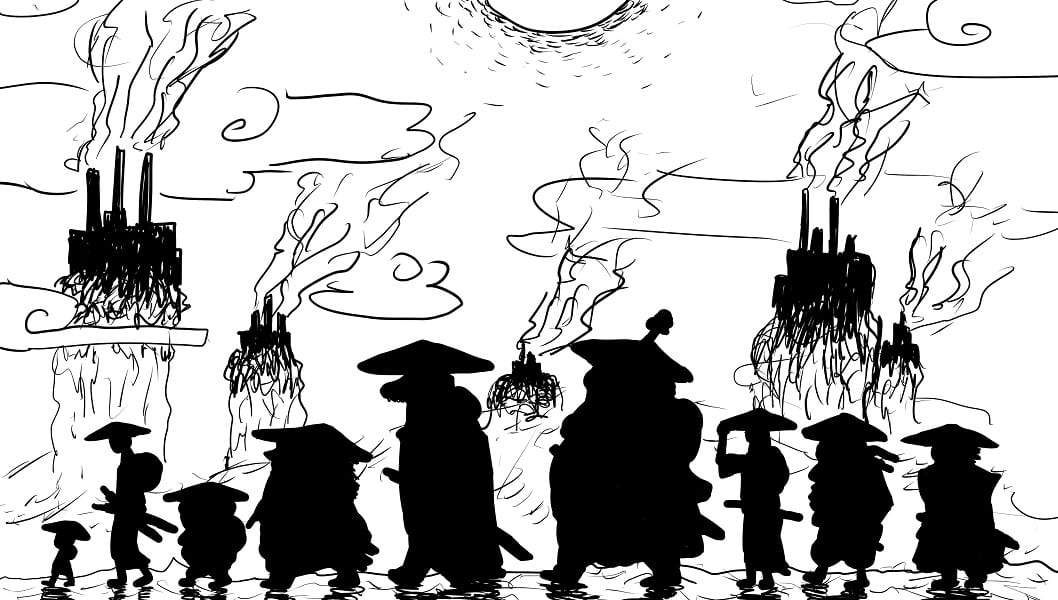 The Red Scabbards are the retainers of the Kozuki Family who bore the weight of Oden’s legacy. The Scabbards devoted the very essence of their existence to bring down Kaido and open the borders of Wano. That’s some strong loyalty we are looking at.

But not all of them were loyal to the cause. One of the Scabbards served two masters, one Oden and the other was Orochi. He never had the intention to save Wano, he was just playing his part. That sounds shocking, doesn’t it? The Scabbards were with Oden since the beginning. They faced breeze and storms together and accepted each other as family.

That’s more than enough to melt even the narrow heart of a mole.

Sadly, in this tale, nothing could change him. The traitor remained true to his “colours.” Now to answer the big question – Who was this traitor? It was Kanjuro and he was amongst the ones who painted the tragic fate of Wano and Oden. His reveal shocked the Scabbards and shattered their trust. But there were subtle hints that a traitor was standing in the line of Scabbards.

Contents hide
The Location of Raizo on Zou
The Plans of the Raid on Onigashima
Why did Kanjuro betray Oden &the Scabbards?

The Location of Raizo on Zou

When Momonosuke, Kanjuro, Raizo, and Kin’emon came to the future, they decided to head towards Zou. On their way, they got shipwrecked and were separated. Raizo was able to reach Zou. This is where things start to get suspicious.

There were only 3 people in the entire round world who knew the location of Raizo. Kin’emon had gone to rescue Momonosuke from Caesar. Guess who remains? Kanjuro had all the time in the world to send a polite message to Jack. Initially, it slightly seemed like the Minks were responsible for giving away the location of Raizo.

But they all got nearly killed while trying to defend Raizo. Thanks to his devil fruit, Kanjuro had the means to intimate Jack of Raizo’s location. For anyone else to do that seems a little implausible.

The Plans of the Raid on Onigashima

This perhaps the gravest wound that was delivered by Kanjuro to the Scabbards. Ever since their arrival in Wano, Orochi always a step ahead of the Scabbard’s alliance. From the real identity of Hiyori to the location of the alliance’ ships, Orochi caught wind of everything.

Finally, the Scabbards met with the forces of Kaido on their way to Onigashima. None of this was a coincidence. It was a long and elaborate plan laid-out by Orochi and Kanjuro was his main pawn. It could be assumed that Orochi’s rise to power was courtesy of Kanjuro.

While he did reveal himself to be a traitor, it was all too late for the Scabbards to act. Kanjuro simply mocked the Scabbards when he declared his actual allegiance.

But why did Kanjuro betray the Scabbards? Why did he choose to sell out his comrades? Perhaps the answer lies in his backstory

Why did Kanjuro betray Oden &the Scabbards?

Kanjuro betrayed Oden and the Scabbards because of his lineage.

The full name of Kanjuro is Kurozomi Kanjuro. Yes, he belongs to the Kurozomi clan. His parents worked as theatre artists and he grew up in a theatre. During an act, his parents were killed on stage when their link to the infamous Kurozomi clan was revealed. Kanjuro was the only remaining survivor of his family. At a certain point in life, he crossed paths with Orochi and the remaining members of the Kurozomi clan.

Orochi told him that the murderers of his parents are dead. This is where Kanjuro became the central character of the elaborate scheme painted by Orochi.

Ever since the passing of his parents, Kanjuro only sought death. He had no ambitions or desires of his own. So, when he became the subordinate of Orochi, he decided to wear his master’s desires. Orochi asked Kanjuro to live as a member of the Kozuki family until his eventual demise. For a man who only desired death, this was a worthy deal.

So, the Kanjuro we think we knew was nothing but a character meticulously drawn by Kanjuro himself. All we saw was an act and thus an illusion. He painted a world that never truly existed.

So, what do you think about this reveal? Were you able to figure out the identity of the traitor? Did you expected Kanjuro to be the traitor? Let us know what you think in the comment section below.