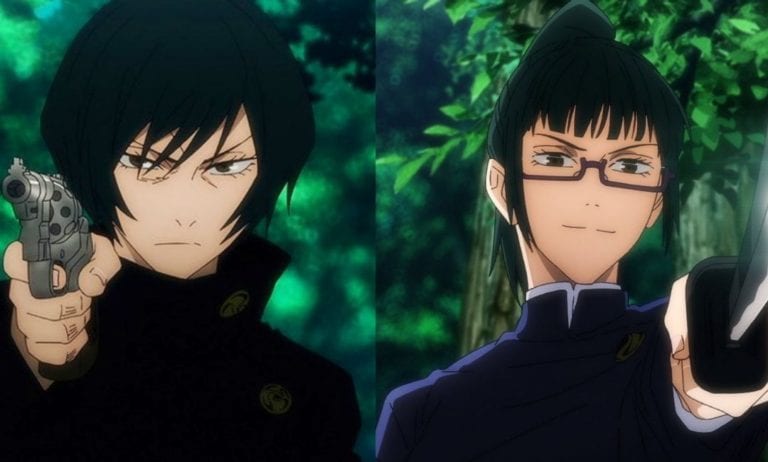 Another week, another Jujutsu Kaisen episode! The Kyoto Sister School Goodwill event is progressing with high stake fights between the Jujutsu ladies! We also get to see more about the elders and the Jujutsu world!

Contents hide
Maki vs Miwa:
Nishimiya vs Nobara:
A fight between the twins:
Final Thoughts:

This fight was short and decisive, with Maki absolutely dominating Miwa. Miwa lost so easily because she was caught off guard by how strong Maki is, even though she is still a fourth-grade sorcerer. Moreover, her twin sister Mai said that Maki is weak and can’t see cursed energy. While the latter part is true, Mai never mentioned her twin sister’s insane physical strength.

Miwa was caught severely off-guard, she kept on trying to analyze the situation and take the right course of action while sparring in a defensive position. However, she wasn’t as quick as Maki who overwhelmed her, mentally and physically.

This can potentially be a great ability, but it isn’t too hard to understand and has way too many problems.

Maki managed to exploit one of these holes; she broke her weapon and used one part as a decoy, making Miwa move her first foot, then used a kunai to get her to move the second feet as well; the rest was easy peasy lemon squeezy for our second-year.

This ability allows Miwa to attack anything in a 2.21-meter range after she takes her stance. As soon as Miwa moves both of her feet, the technique dispels.

Nobara kept Nishimiya engaged and made her believe that she had the advantage over our country girl (if she was real and read this, she’d probably hit me).

Nishimiya’s ability allows her to control her broom and also create powerful gusts using cursed energy. This works well as a long-distance attack. While these gusts were strong, Nobara could withstand them. Nishimiya couldn’t use more energy due to Toge, who comes into the picture now.

Oh, and he does nothing. He just hides. All the Kyoto tech students have covered their ears with cursed energy to prevent Toge from using his ability on them.

However, the students are constantly draining their cursed energy and can’t risk stopping the flow, as Toge’s technique could defeat them.

Toge is the ultimate support member of Jujutsu Tech’s team; who doesn’t need to show himself but will always have a presence.

The constant flow of cursed energy is detrimental in the long run, as it would drain a lot of energy.

Moreover, people with average cursed energy levels will lack the same endurance as before and won’t be able to use their best tricks.
He is similar to a lurk, he flanks the enemies and catches them off-guard, turning the tides for his team. However, if you pay too much attention to him, then you won’t be able to fight enemies in front of you. If done right, this can be very annoying to deal with; and Toge is experienced at it.

Coming back to the Nishimiya vs Nobara fight, it seems like Nishimiya deeply respects Mai a lot and has a deep bond with her. She continues talking about how Mai faces a lot of problems every day, with having to stand up to her family’s elite name expectations and dealing with the problems of being a woman in the jujutsu world.

I think that she talks so much about Mai because Nishimiya believes Mai to be a good person and wants to change Nobara’s perception of her, as Nobara hates Mai; for her own reasons.

While Nishimiya talks about all the problems she has faced due to her family pressures, Nobara makes it clear that Maki faced the same problems; hence Mai’s bad behaviour can’t be accepted, which is absolutely correct.

Then, Nobara uses all the pin she had attacked Nishimiya before with to create a large-scale explosion, forcing her to fly at a lower attitude. She jumps and grabs the hair of Nishimiya’s brush and uses her abilities to immobilise the broom.

With Nishimiya down, Nobara attacks her with a squeaky hammer (she doesn’t want to kill her using her normal hammer, ofcourse), and then Mai shoots her in the temple with a rubber bullet from a huge distance, she must’ve had an in-built scop in her to shoot so accurately with a revolver.

With this we come to the last leg of the fight, with Maki approaching Mai.

A fight between the twins:

I’m not going to dig into the fight itself but talk about the twins’ relationship instead because that’s what makes this fight good. Maki and Mai, both lack something which the other has. Maki has physical strength but lacks jujutsu powers and it’s the complete opposite for Mai.

Neither of them were supposed to become Sorcerers, which Maki couldn’t accept; which was the problem. Mai just wanted to live a normal life with her sister happily.

As Maki says, she would’ve hated herself if she did not become a sorcerer, which is her own personal battle. Due to her decision of leaving the family to become a sorcerer, the Zenin family doesn’t let her promote to higher grades.

On the other hand, Mai hates being a sorcerer. As Maki became one, she w. Mai’s reason for hating her older comes from her own selfishness or Mai’s selfishness.

In such cases, you really can’t blame either of them. One leaves for her own mental health and life, while the other wanted the opposite. Again, none of them are wrong; but Maki took a very bold decision, which many can’t in real life.

You can clearly see that Mai still loves her older sister but resents her at the same time. I think that the last bullet she fired using her ability Construction; could’ve damaged Maki severely when she grabbed it, but Mai never intended to harm her.

This was a pretty good epsiode overall. The exchange arc is doing its job of highlighting the side characters and fleshing them out well so far, I’m excited to see where the series goes ahead with the twin’s story.