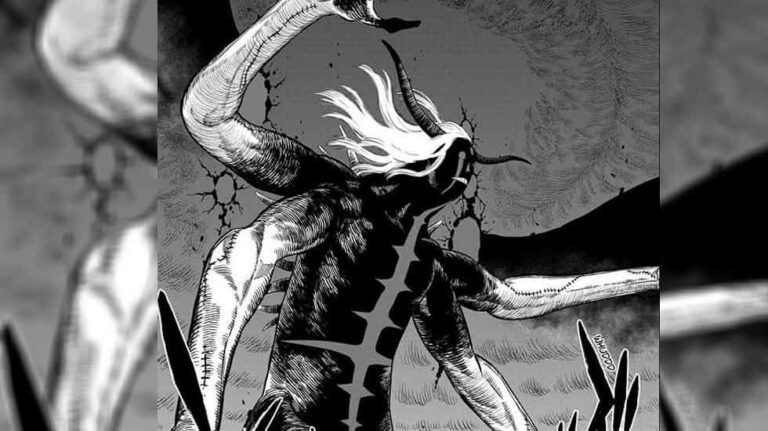 Black Clover Chapter 280 came as a shock to the readers and the Clover Kingdom equally. Last chapter, the magic knights defeated all Spade Kingdom forces, but what they did not know was that another factor was in play. It was none other than Morris of the Diamond Kingdom who has joined hands with the Dark Triad.

He has the devil’s powers now and found a way to accelerate the growth of the Tree of Qliphoth! This newfound power even helped him release the first two devils connected to the Tree: Lilith and Namaah.

But the troubles do not stop there. A large amount of negative mana and lower-ranking devils accompanied the new devils. Thus, a bigger problem arose for the Clover Kingdom and Mereoleona: the revival of the ancient demons.

Contents hide
Mereoleona’s fight with the demon
Similarities between Licht’s demon and Heart Kingdom’s demon
How did the demon revive?
Could this be Morris’s doing?

Mereoleona’s fight with the demon

In the previous chapters, Zenon had unleashed an ancient demon on the Heart Kingdom citizens. This demon had an immense amount of mana and could possibly trample all weak citizens. Fortunately for the people and unfortunately for the demon, one of the Clover Kingdom’s strongest mages showed up!

Mereoleona was fired up to fight a strong opponent, and the ancient demon gave her the opportunity to test her limits.

She used her new form of mana zone to defeat this threatening creature in one go! Guess the new opponent wasn’t even close to our ferocious Mereoleona. WRONG! A “pet” kept by the Dark Triad would definitely not be some small fry, even if it is against Mereoleona. The sudden defeat just did not sit right with us. There was sure to be a twist, and the latest chapters delivered it right up in our faces. Lilith and Namaah did not only revive the Dark Triad but also the demon.

And a possibility that we had not thought of happened too! Licht’s demon lying in the boonies revived too.

This is the worst situation no matter how you look at it. Most of the strong mages are occupied in the Spade Kingdom and the last time defeating a demon took the life of the first Wizard King. But just how are these demons connected?

We had speculated earlier that the Spade Kingdom’s devil eerily looks similar to Licht’s demon mentioned previously in the story. We were sure it was not the same demon because, well, it is a skull. However, it was completely out of imagination to think that the ancient demon will get revived too.

The appearance of both the demons is very similar. The horns on the head and mammoth sizes along with a tremendous amount of negative mana are points enough to compare them. Both the demons have a weird mark (like the ones the Dark Triad have) on their body.

If we think about it, this means that these “demons” have some direct connections with the devils. Both the demons seem to not have their own will either. It is almost like someone or something is controlling them.

Why do I say that? My theory comes from the fight between Lumiere and Licht as a demon.

Licht kept attacking Lumiere relentlessly with powerful spells even though he knew the truth about the massacre at this point. For a fraction of a second in the fight, it seemed like Licht regains his consciousness. He pitifully uses that moment to tell Lumiere that this is the moment to end it. If he knew the destruction he was causing, why could he not control it?

That aside, believe it or not, the demon did not have enough power until now. But with the first gate to the Underworld opening, an even bigger amount of power will be unleashed. We have faith in Mereoleona, but what about the Clover Kingdom?

While there are theories about Asta taking down the demon in the Clover Kingdom in a similar way to Lumiere, I think it is about time for the other squads of the Clover Kingdom to shine. Especially the Silver Eagles. Will Noelle’s siblings be able to protect the kingdom while Nozel is away? And the Crimson Lions without any Vermillion present?

How did the demon revive?

The devils of the Tree of Qliphoth are high-ranked, so they have an overbearing impact on the mana. They began absorbing all the mana in the surroundings and possibly emitted negative mana. This sudden imbalance caused the resting skull of Licht’s demon to rise again. But it is bizarre that since Licht is dead, how did this demon come alive? Are these demons solely functioning on negative mana?

If that is indeed the case, it might explain my earlier theory that negative mana controls the demons. Whom these demons arise out of has no impact on the will of the demon. However, there is something more we have to consider here.

Could this be Morris’s doing?

We know the origins of Licht’s demon was due to negative mana absorbed by an elf. But is the Spade Kingdom’s devil another elf too? The story already told us that elves are alive in Elysia – so it is quite a possible scenario. We also know that there is one specific scientist in the Black Clover universe who likes to carry out absurd experimentations.

Morris is infamous for his experiments on the Diamond Kingdom’s children to turn them into weapons. So if he somehow got hold of an elf, he would do nothing good. He already had the Dark Triad on his side, which allowed him to do as he pleased. Did he cause an elf to go berserk with negative mana?

This will have serious implications because the Elysian elves will get involved in this fight too. Another chilling possibility is that Morris knew that Licht’s demon would revive too. And I don’t need to give a reason why he still would go ahead with the plan.

What do you think is the connection between demons, elves, and devils? Read the latest chapter on Viz, and let us know in the comments!