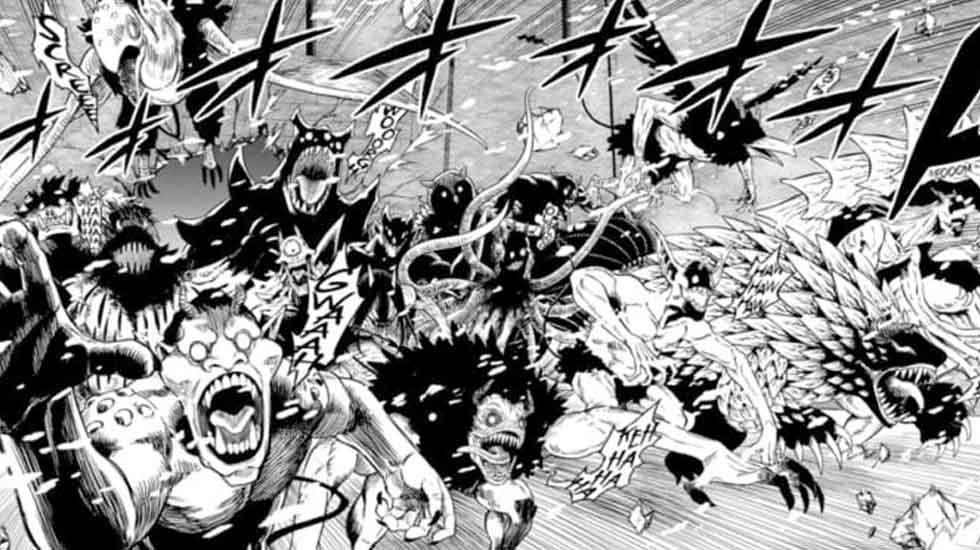 Last week, we said that the Dark Triad is far from defeated, and Black Clover Manga Chapter 280 proved that we were right. The Clover Kingdom Magic Knights have no end to their troubles as even bigger roadblocks to defeating their opponents have emerged.

And as the situation stands, they seem to have bleak chances of survival, and their rescue mission probably just went down the drain.

Revival of the Dark Triad

The most horrifying moment of the chapter easily was the revival and power-up of the Dark Triad. In last week’s chapter, two high-ranking devils, Lilith and Namaah, were released from the Tree of Qliphoth. It was but obvious that things were going to go downhill. But how much could the stakes rise? We hadn’t imagined that!

The release of the devils opened the first gate to the Underworld. This gate was a barrier between the contract of the Dark Triad and the devils. With it opened, they have nothing holding them back anymore and can draw 100% of the devils’ powers!

The earlier percentages were already enough to overwhelm the magic knights to the point of using their best attacks against them. It is beyond imagination the boost 100% devil powers will give the Dark Triad, but the problems do not end there. Side note: Tabata-sensei’s devil designs are amazing!

The ancient demons have risen!

Mereoleona was extremely keen on fighting strong opponents, so the devils said, “sure!”. The dark magic seeping through with the devils infused the ancient demon with an eerie power, and it looks strangely similar to Licht’s demon. We had speculated that this demon might be related to the elves and this possibility still stands.

Mereoleona has some flashbacks to the Eye of the Midnight Sun and Reincarnation arcs too. Is it her animal instinct speaking, or has she figured out some connections? It will be an insane fight between an upgraded Mereoleona and a beast that looks as powerful as Licht’s demon!

And another fight that the Clover Kingdom knights will have to take on while their strongest forces are away! Who will defend the kingdom against such a powerful force with Julius being chibi?

The ancient demon was one thing, however. It looks like multiple low-ranking devils have also been released along with Lilith and Namaah. This not only looks bad for the citizens and Resistance of the Spade Kingdom but also for the Clover Kingdom. Only people with strong mana or anti-magic can defeat the devils & demons, but the citizens are low on mana.

With Mereoleona busy with the demon and the magic knights with the Dark Triad, who will protect the citizens?

Speaking of protecting, the Vice-Captain of the Black Bulls quickly realized the gravity of the situation. Perhaps in the current scenario, (surprisingly) Morris is the biggest villain to defeat. He really went from an insignificant antagonist to being the main boss within a few chapters. The Tree of Qliphoth may release all the devils if Morris is not stopped. In this situation, Nacht made a decision.

The best bet right now is Asta. His plan is simple. Stop Morris, so the Tree’s growth stops, and make sure the devils & Dark Triad don’t overpower the magic knights. For this, he has to buy time for Asta. Nacht is prepared to die, so he knows the risks associated. However, I am doubtful if Asta will be enough to handle all the mess. I think it is about time Noelle, Mimosa, and Secre come to the rescue.

There is no way anybody is making out unfazed in any situation, let alone Yami and William, without any additional support.

Will Asta and Noelle, Mimosa, and Secre come into the fight in the next chapter? And what about Magna and Zora? Not going to lie; the Zora deficiency is real! It is also time to bring the other squads into the story and defend the kingdom. I hope the knights make it to the fight ASAP. Also, please don’t let Nacht die shounen kamisama! We still want to see him banter with Yami.

What are your thoughts about the new chapter? Read it on Viz, and let us know!

Black Clover: Theory About What Happened To Nacht’s Brother