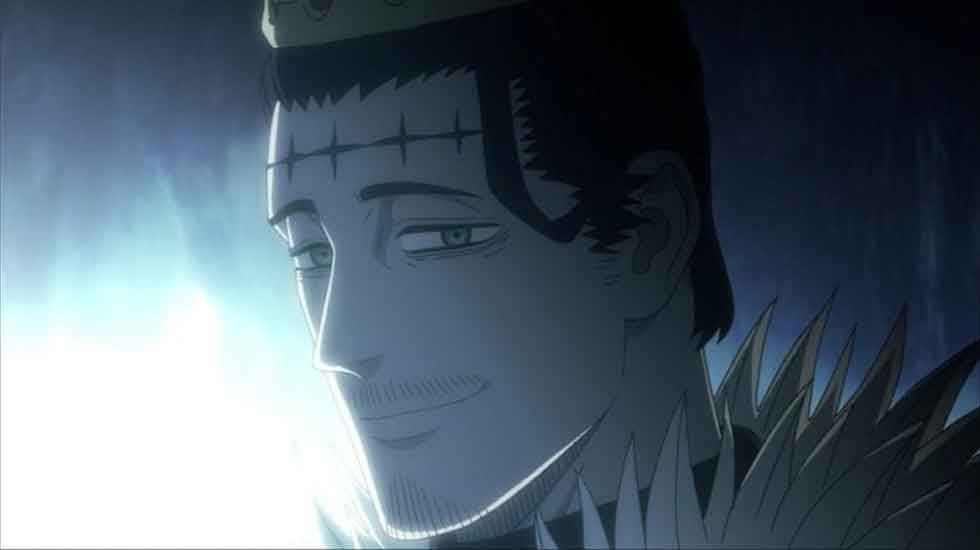 Did you see what just happened? I was stunned for five whole minutes after the episode’s end. Black Clover has definitely stepped up their game for this arc, and it is showing! The staff worked hard on adapting a fabulous episode filled with “what the heck” and “oh my god” moments. Without wasting any time, let’s talk about what went down.

Vanica heads to the Heart Kingdom

We see Vanica reaching the Heart Kingdom after Zenon destroyed Golden Dawn in last week’s episode, and of course, her intentions are far from good. One thing I love about Black Clover is that even in smaller frames of time, the characters shine in their true forms.

Vanica barely had two scenes in this episode, but we know she is ruthless and wants to play with the Heart Kingdom. She wants to kill as many people of the Kingdom to enrage Lolopechika to fight her seriously. She also treats her subordinates like trash and openly expresses her disgust.

It will be a thing to see the extent to which the Dark Disciples damage the Heart Kingdom and when and how Lolopechika collides with the infamous Megicula again.

The sinister leader of the Dark Triad is here, and how. Dante is a worshipper of ‘malice,’ which brings out a human’s true nature. He is blunt in his ways and prides himself on being full of malice. And the worst part is that he is after Yami just like Zenon wanted William.

What are their motives for picking two of the most powerful mages of the Clover Kingdom? Why go to such lengths? And talking about that, Dante left no stone unturned.

Dante mercilessly used continuous attacks while avoiding Asta’s counters just to pass his time until Yami arrived. He even destroyed Rouge, who was protecting Asta with his devil’s powers! With not even half the Black Bulls force present, the best bet was Asta’s devil powers. However, who knew that Dante would toy around all Asta’s attacks as he did?

Asta pointed out an interesting difference between him and Dante in this episode. Dante likes to bring his negative thoughts to reality and reduces everything else as ‘means’ to selfish ends. On the other hand, Asta has a devil too, but he considers people as ends in themselves. Even his negative thoughts do not make him lose sight of his true goals.

This comparison sends Dante into a rage, and he unleashes even more of his powers, suppressing Asta.

Dante wants Asta to realize the true emotions of malice, anger, revenge, and hatred. And to do that, he materializes a sword and sends it piercing through Gauche’s body! Vanessa and Grey could do nothing except watch as Asta lost control of the devil. He unleashed a new form after something triggered in his – or his devil’s – memories.

It is quite possibly the memories of Asta’s mother! We still don’t know how it fits here, but a crazed Asta released multiple attacks chasing Dante.

All of this just gives Dante reasons to ridicule Asta. He loathes that Asta has lost control of himself and is working on a sole autopilot. Asta’s self-destruct mode will only make it easier for Dante to end him. Not to mention his devil mode takes a huge toll on his body. However, maybe in a moment of clarity, Asta predicts Dante’s next move and manages to hurl an attack. This attack actually wounds Dante, even though it was only a wee bit.

Dante’s anger mixed with surprise and disgust was easily the second highlight of the episode. The voice acting and animation sent chills down the spine because it was a moment that told us that nobody has even come close to hurting him. His ego of being host to Lucifero has overpowered his ability to think someone can actually defeat him.

A great episode that surely all manga readers and anime watchers are equally satisfied with. The animation was crisp with sharp movements; special props to Asta’s berserk scene. The color schemes and transitions were beautiful, too, from the mellow glow to sinister shades. The OSTs and their use hit the right note along with the camera angles. The fantastic voice acting made sure we could feel Dante’s malice through the screen.

The only thing to nitpick might be that this episode felt it had too much to absorb, but personally, it didn’t feel long. I am rather excited and terrified of next week’s episode because even if Yami will arrive, it is hard to imagine him fighting Dante alone. Dante’s attack, along with Vanica eyeing the Heart Kingdom, amounts to nothing good for the Clover Kingdom knights.

Are you hyped for the next episode? Let us know!

Black Clover: Why Does Asta Have No Magic?