Skip to content
Home » Anime In India » How Is The Indian Anime Scenario Evolving?

How Is The Indian Anime Scenario Evolving? 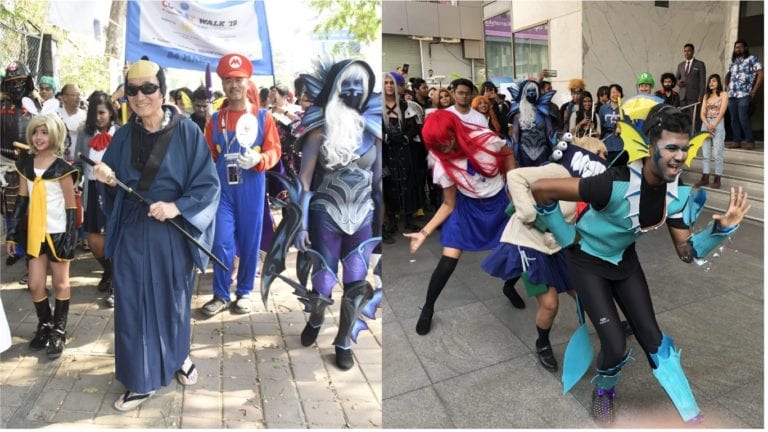 Indian children have always been fond of anime, to be honest. Since the time of Jungle Book, The Legend of Prince Rama to Crayon-Shinchan, Doraemon, and DBZ anime has appealed to the Indian audience unknowingly over and over the years. And it is not limited to children anymore. With a positive approach, the Indian Anime scenario is drastically changing in this country!

What was restricting the Indian Anime Community until now- the “mentality” of people, eventually changed with time. People started recognizing the values that are present in 2D animation. The shackles that Animax couldn’t break before are coming undone. More and more people are now exposed to the beautiful world of anime.

Contents hide
Improving Situation of Anime in India
Fan awarness and Petitions
Indian Anime Youtubers
Recognition of Anime Market in OTT Platforms
Hindi Dubs over Sacred Games
Japanese Film Festivals and Conventions
Rise of Studio Durga
What are we still lacking?
Animation as an Entertainment Medium is going to fail
Lack of Courage and Imagination
Freedom to Create

Improving Situation of Anime in India

Internet has changed the game for every entertainment industry. Easy access to cheap internet attracts a large number of people to know about anime, manga, and good Indian as well as foreign content. With the help of several social platforms fans are engaging and talking about their favorite anime, manga, and movies.

Anime has now started to become a cult in India. Social media has become one of the most important stepping stones to bring success among Animation Studios. There are several Indian anime fan clubs such as Chennai anime fans club and Mumbai anime fans club, and Indian anime community such as Otakunadu, Know_senpai, and Anime_talks. They introduced the #Indiawantsanime hashtag to bring anime to India.

The huge success story of Makoto Shinkai’s 2019 hit “Tenki no Ko” was the doing of these anilovers! The Japanese Film Industry has heard us loud and clear that WE LOVE ANIME! We will accept this medium wholeheartedly with open arms no matter what. It was a really historic moment for not only the Indian Anime Community but in the Indian Cinemas as well.

And to continue this epic tale of more anime movies screening in India we might once again witness the power of unity from all over the country. A petition to land Demon Slayer – Kimetsu no Yaiba –“The Movie: Mugen Train “ in the PVR cinemas has been acknowledged. It will be absolutely amazing to have the record-breaking movie screened in our country. This will bring a whole new wave of anime fans together.

Youtube became a thing since 2010.With the introduction of smartphones it became unstoppable to keep Anime under the cloak in India. Indian Anime Youtubers like AnimeTM Talks, Indian Otaku, Anime Mirchi, Pokeverse X, Screen Point etc has hyped Anime in India to another level. They promote all types of Anime related news, reviews, spoilers, discussions and much more with little desi tadka!

These Youtubers play a big role in the popularity of Anime in the current scenario. Collaborations withforeign Youtubers and Studios to grow the community is a healthy way to increase the influx of content across the globe. They might just become the heroes who pass on the baton of Anime knowledge from one fan to another.

The pandemic of 2020 has done a number on every Entertainment Studio across the world. And here is where Online Streaming Services took off. Such as, NETFLIX– a humongous platform is taking the entertainment industry by storm. Among the several media they cater to, Anime has also taken a golden spot. The OTT platforms are well aware that Japanese Animation has a huge scope in the industry. Thus, every now and then whether the concept is good or bad, Netflix has released its original Anime contents too.

In the West, Netflix, Amazon Prime Video, etc are filled with amazing contents on demand. Now, so does India. A variety of anime is available on all the legal OTT platforms that will make you an anime fan instantly. I am sure it will help the Entertainment industry to measure the value of Japanese animation in the Entertainment business.

According to most recent exciting news, NETFLIX India has acquired the license one of the giants- One Piece(Live Action). Imagine the excitement this is gonna bring in among the new anime fans!

Astonishingly yes. The Youth community is crazy excited for Anime in Hindi Dubs rather than a new season of the Indian original series “Sacred Games.” No wonder, the Indian Cartoon Channels has invested in languages like Hindi, Bengali, Oriya, and Telegu to increase their TRP. We otakus know, how difficult it is to convince and explain anime to those who have never seen it. So, this really shows how much the community is excited to bring good content from all across the world!

Though very few can afford to participate, but it sure unites similar minded Otakus and Weebs together. JFF(Japan Film Festival), Japan Utsav(Kolkata), Japan International MANGA Award, Cosplay Walk(Bengaluru) are some of the notable events that encourage the Indian Anime community to step forward.

Japan is proud of its pop culture. Thus it is natural for them to bring forth such events to popularize new bonds with India. Cosplays, Movie screenings paired with traditional ceremonies are a great way to make people aware of a country’s cultural aspects.

AniCons and Comicons are also getting more and more in vogue not gonna lie. And some fans even travel from one state to another just to show off their handmade Anime costumes! Such should be the undying spirit of web. Proud of them.

The popularity of Anime Merchs has also skyrocketed in these few years. Merchandising companies like ComicSense, Redwolf etc are growing tenfold every year. Besides that, e-commerce websites like Amazon and Flipkart are also selling mangas, light novels and other anime merchandise. They even include underrated animes along with the most popular ones. How cool is that!

We finally have an Indian Anime Studio- Studio Durga! Their first project after 4 years of labor which started with only 4 creators is ultimately completed.

“We are the first Indian animation studio that creates anime, or 2D hand-drawn animation in the art-style of Japanese manga comics, wholly independent of foreign collaboration. We believe in telling powerful stories through the medium of animation and design original entertainment that can be enjoyed by teens and young adults. Owing to an ever-growing passion for anime and manga among Indian youth, Karmachakra, an original story set in India and animated in the style of anime was conceived of in 2016, which led to the formation of Studio Durga in 2017.

​If you’ve already watched our trailer, watch the pilot for our upcoming movie below, which has won the Platinum Award for Best Animation Short at Independent Shorts Awards, Los Angeles 2020, and received Honourable Mentions for Best Webseries/TV Pilot & Best Original Score!”

Studio Durga on Diwali ( Nov 14, 2020 ) announced that the production for the full feature-length episode zero of Karmachakra is 100% complete. The news was shared on all of their social media platforms. But the full movie release date and platform are yet to be announced.

Though a very tiny step towards a huge goal, Studio Durga has the love and support of thousands to show vibrant results in terms of embracing the medium as a form of art.

What are we still lacking?

So, we can proudly say the Indian Anime Scenario is changing steadily towards a better future. But we still can’t full fledgedly unwrap the potential of Animation or Anime in India if we don’t get the support of Indian Entertainment Companies.

Animation as an Entertainment Medium is going to fail

Even though Anime is very much popular in India, a majority of the masses are still not up for paying to watch Anime. Online anime broadcasting websites like 9anime, gogoanime, torrents, VPN, and many more are used by millions of Indians. They give you free anime but the views and revenue go to anonymous sources. Anime studios never get TRP from India. Because of this reason, Anime studios never considered India as a potential market for Anime.

Lack of Courage and Imagination

India is bubbling with an arsenal full of talents. But what we lack is courage and imagination. We have talented artists, manpower and tons of money. Yet, the Indian Entertainment Studios are iffy about spending them on an upcoming growing market. Why?

Indian mindset has self programmed themeselves from thinking out of the box. Even in the 21st century we are repeating and re-repeating our one shot hits- Ramayana and Mahabharata in every medium.

As Suresh explains, animated stories can use crazy impossibilities as a premise, but “our imagination right now seems limited to what we can see.” Almost all films want to tell popular stories from the Ramayana or the Mahabharata. Says Suresh, “It’s like India has only two mangas that are really popular; Japan has a million mangas to choose from.”

Freedom to create is also a hefty power that the Government cannot give away easily. Indian Government wants its people to know less about the outside world. Because, knowledge can backlash on them. And the ability to change minds is a feature of Anime. And if that happens the country may lose their current footing over the Indian Entertainment world.

Government support for animation is non-existent because in theory, it is a profitable business, predicted to grow in the coming years. Neither is there a rock-solid television or theatre policy to give space to home-grown animated content. Gitanjali Rao, critically-acclaimed animation filmmaker, talks of how Disney came on board to produce her contemporary version of the Mahabharata but later pulled out citing the math.

Read the Full Article on Curious case of Indian Animation to know more about the conspiracies and policies that lead to today’s scenario.

To summarize, Anime has come a long way from Japan to India and still, we have a long way to go. Slowly and steadily it has made India-one of its popular hubs. Be it a metro city or a village, Anime is now available to all. A bright future is coming to greet us very soon.

Even if the medium is still unknown to a large mass of people, we at Animehunch will always make sure to try our best to help the medium grow. We are a bunch of weebs whose aim is to give the Indian anime community the great stories it deserves. We aim to become the voice of Indian anime fans by providing them with a platform that helps them bloom their talents for storytelling and thirst for anime. We aim to bring the best of both untapped potentials of Superior Indian talent and Superior Japanese drawing/animation and storytelling. And I strongly hope the future of Anime in India will bloom beautifully and our coming generations will be thankful for it.