Attack On Titan: Were Willy Tybur & Zeke Working Together? 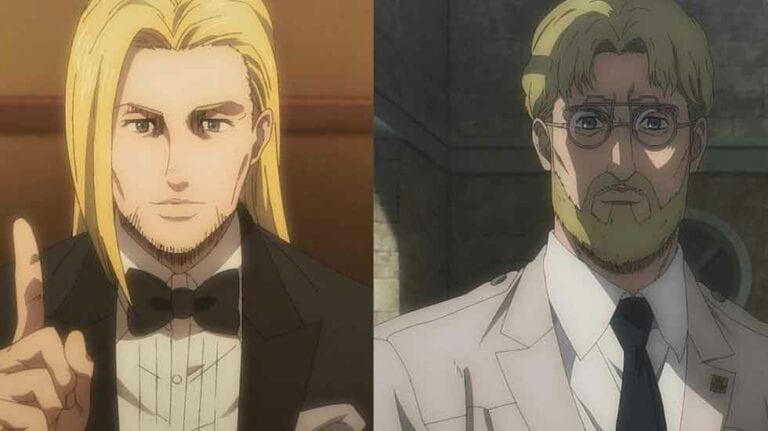 Willy Tybur made one of the most rallying speeches in Attack on Titan, which not only rallied his fellow Marleyans and the dignitaries from other countries; but also riled up Eren to attack and eat him. Moreover, Willy knew that there were Paradis spies in Marley, and chose to incite them anyway, fully accepting responsibility and death to unite the world against the devils of Paradis. Why he did this and what his motives have been covered in a separate article!

However, the question here is, was Willy Tybur working with Zeke?

Let’s look at a few points and a few panels from the manga that talk about this.

Please know that this article will have spoilers of the Attack on Titan manga, so read it at your own discretion!

Zeke brought up the plan to attack Paradis

Zeke realized that the Marley empire was losing its power over the other countries due to the reliance they had on the titan powers. While Marley was using the Beast Titans to destroy their enemies, the same enemies put in a lot of effort to build anti-titan technology that would render the warriors obsolete. Zeke realized this and immediately suggested that Marley attack Paradis and take control of the Founding Titan to secure their power status in the world.

Coincidentally (or was it?), Willy Tybur appears in front of commander Magath and tells him the plan to attack Paradis soon after Zeke brought it up. Zeke also explains that the Tybur family will be helping by playing the role of the narrator and also use the War Hammer Titan in the coming war. Honestly, the timing is a little too perfect, isn’t it?

Willy Tybur moves only with the introduction of Zeke’s idea

As mentioned, the timing of the Tybur family’s involvement seems a little too perfect. They knew about the threat that Paradis held and yet did nothing to help Marley. The Marleyan government dismissed the knowledge brought by Zeke and Reiner. Moreover, Zeke’s idea of bringing back the Founding Titan was shot down initially. Willy Tybur started moving after the plan reached the ears of the party.

Not only that, but Willy Tybur claims that the Tybur family, “Saw and did nothing more”. If Willy did feel this way, why wait? In addition, the Marleyan government had no other new information. If we look at it strategically, there was no use in waiting all that extra time, was there? Especially the four years after the Paradis operation failed. Furthermore, Zeke’s suggestion seems to have spurred Willy Tybur into sudden action. Might this be an indication of them working together?

Zeke talks to a mystery person on the phone

There’s no proof that Zeke is talking to Willy, but isn’t Attack on Titan all about the minor details? This panel with Zeke follows the conversation between Magath and Willy. This cannot be a coincidence. Moreover, Isayama wouldn’t randomly put in a panel of Zeke having what seems to be a surprising conversation with someone right after Willy reveals his motives. Simply the fact that this panel takes so much space on the page is pretty telling!

Looking at these three points, there is plenty of evidence. Additionally, Their goals match up very well and their timings match a little too impeccably. Along with all the detail shown in this manga, this is a big hint that Zeke and Willy Tybur were colluding.

WAIT! This does not mean that Willy Tybur was privy to Zeke’s plan at all! Zeke might have simply told Willy that he wanted to attack Paradis to secure the Founding Titan. He then used him to enact the rest of his secret plan with Eren. Of course, they might not have been working together at all. Maybe Willy had no idea of the danger that Eren presented. If only we knew what Willy suspected about this plan…

Willy Tybur suspects Zeke of being a spy

Now, this isn’t mentioned anywhere either, but it is possible. Willy says to Magath, “We much be most careful of conspirators aligned with Paradis who hide in the shadows… But we still don’t know who they may be”. It’s important to note that Willy didn’t trust Zeke with this knowledge. He only tells Magath, a man he believes is honest and loyal to the country.

Now, Willy is clearly a smart man and is careful with his words. He trusts Magath and tells him what he suspects. If Willy suspected Zeke of being a Paradis/ Eldian sympathizer, he would’ve told Magath. Willy knew that there were people who aligned themselves with Paradis, but he wasn’t sure who it was. He trusted Zeke’s plan to attack Paradis and gave himself up in an effort to rally the world, but thereby played right into Zeke’s hands.

Unless… Willy understood Zeke’s plan, but allowed him to go ahead with it? Conversely, he might’ve had his own motives? Well, that’s a topic for another day!

What do you think about Zeke and Willy planning together? Did they do it? Why? Why not? Let us know your thoughts in the comments below!