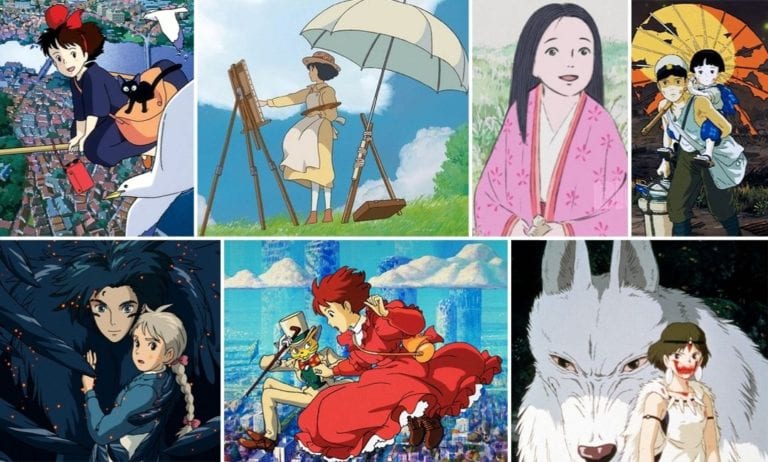 Studio Ghibli is one of the most adored Japanese animation film studios. Totoro, from My Neighbour Totoro(1988) is their mascot and Spirited away(2001) became a massive box office hit. Ghibli made a name around the whole world for its realistic yet out of the world view of cinematography. It has impacted the lives of many through the wonderful movies they created. All of the films are family-friendly with deep-rooted wisdom. The world of whimsical imagination portrayed in the characters is a way for Director Hayao Miyazaki to be a part of everything that he cannot be in real life.

So, apart from Spirited Away and My Neighbour Totoro, Ghibli Studio has a lot in store for you to must watch! We bring you Top 7 Ghibli Movies that you should definitely check out:

Kiki’s Delivery Service is another adorable film by Miyazaki which ranks quite high in the charts. This movie’s main theme is “transition into adulthood”. It revolves around 13 year old Kiki, who leaves home to find a new city to earn her living by becoming an independent witch. We follow her through the picturesque European cityscapes as she goes through numerous experiences of an adult’s mundane life throughout her training.

This is a enjoyable movie for both children and adults. The adults can relate to the struggles of Kiki while children can gulp down the awestruck view of bright colourful chracters and fun animations. A must watch for all cinema fans.

Hayao Miyazaki’s love for aircrafts and his use of flight as an element in many of his films has come from his family business.

He also drew inspiration in this film from his mother, who suffered from tuberculosis which she survived but spent many years in the hospital. Thus, accumulating all these aspects from his own life into the biographical film of Jiro Horikoshi, the man who designed the deadly Mitsubishi A6M Zero.

The film lacks all the magical components that signifies Miyazaki’s films and instead replaces them with historical moments-from the 1923 Great Kanto earthquake to Jiro’s aviation idol Giovanni Caproni. It might leave out a great number of children but it is a masterpiece for most young adults.

Howl Pendragon is surely one of the most beloved characters in the Ghibli world. Based on the novel by Diana Wynne Jones‘ Howl’s Moving castle is set in a fictional kingdom where both magic and early 20th-century technology are prevalent. This is the story of a young, woman named Sophie who is turned into an old woman by a witch who enters her shop and curses her. She encounters a wizard named Howl and gets caught up in his resistance to fighting for the king.

This movie boasts some of the best quality animation the Studio has to offer. It also netted a Best Animated Feature just after its release. The best thing this film jhas made us realize that how age can be a positive thing as one grows older. No wonder, with so much magic and imagination going on this was Miyazaki’s favourite film he had directed.

Isao Takahata’s last movie The Tale of Princess Kaguya was adapted from Japan’s oldest existing folklore “ The Tale of the Bamboo cutter”. It needs more recognition than Takahata’s other famous work Grave of the fireflies as this movie’s animation and music are sky apart from what Studio Ghibli had done before or will do after.

A Shoujo theatrical movie Whisper of the heart is based on a coming of age manga by Aoi Hiiragi with the memorable tune of “country roads” by Yoko Honna.

It is the story of a middle school girl named Shizuku who decides to build off of her love of books by becoming a writer while also developing a cute little romance with the boy she had misjudged. Anxiety, Uncertainity, Optimism and Ambition- these are the elements portrayed in this movie which takes a step back from the whismical fantasy of Ghibli Studio.

With a beautiful lovestory and couple goals this movie is marked as one of the most romantic Ghiblis of all time. By the way if you are looking for the whimy side of this story, there is a sequel of this movie- The Cat Returns(2002)

The movie is a glimpse of Hayao Miyazaki’s own war stricken childhood which makes it more dark and horrifyingly sad. The film depicts a clear picture of the horrors of World War II, where everyone is trying to survive; so tend to fend for themselves showing little to no charity towards others.

The main characters Saito and Setsuko were alone in a selfish world trying to survive on their own in a disused bomb shelter when their parents failed to protect them. The story is simple without much character development but offers a lot of emotion.

The degree of misery and betrayals shown in this 2D world is greatly relatable to real life situations. It paints a gruesome picture of people and their true nature in needed times.

Environmentalism is a vivid topic Studio Ghibli has always taken a liking to. The neccesity for humanity and nature to remain in balance despite humanity’s unceasing desire to create and expand- this is the environmentalist epic thats been told in Princess Mononoke.

The dawn of industrialization and the price humanity has to pay for crossing swords with Nature and his children lead us to this majestic,powerful,exciting and gorgeous piece of animation. It is of course Miyazaki’s proud masterpiece known mainly for it’s wolf Princess Son, who doesn’t need a saviour.

Yeah, so that’s all folks! I hope senpai was of help. If you want to add some of your own, shy not! Go ahead and comment down below! Mata ne ^-^