Jujutsu Kaisen Episode 16 Review: PANDA IS NOT A PANDA! 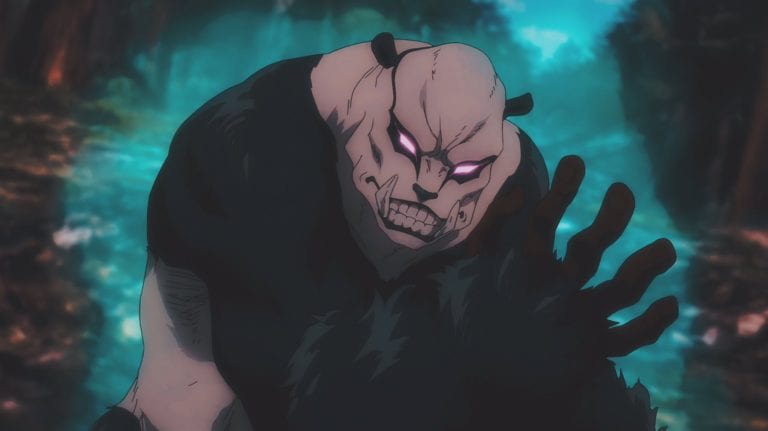 I said that It’ll be interesting to see more about the side characters and I’m glad to say that I wasn’t wrong! Episode 16 primarily focuses on Panda vs Mechamaru which is a delight to watch. However, there are other things to discuss too!

Todou is helping his “best friend” to improve. The fight scenes are amazing as usual with strong impacts, dynamic camera angles and amazing voice acting.

Here, Todou addresses Itadori’s “lag” when channelling cursed energy, which makes it hard to understand his energy flow. Todou already knows how to feed Itadori’s hunger for power, “it won’t work against special-grade curses”. Yeah, that’s it; Itadori’s onboard now.

Todou seems to be a bit critical of the way cursed energy is taught to people, as he says that the normal way of understanding cursed energy slows down the flow of it. Many sorcerers believe that cursed energy is generated near one’s naval and spread from there to the shoulders, the arms and then finally to the fists. However, Todou believes that this is helpful for beginners but it limits one’s potential, as a person is completely one with their own body and their surroundings, i.e. everything that exists in this world.

What Mahito stated about cursed energy is quite similar as well. He states that someone who has control over their soul can take any form and channel their cursed energy; which he does by touching a person’s soul. In the same sense, if a person believes that their body is “one’, then they won’t face any “lag” when using cursed energy.

This can be a bit confusing to understand, but I believe that other strong sorcerers like Gojo do the same.

Nobara and Panda vs Nishimiya:

The next segment is just Nobara annoying Nishimiya. While Nishimiya does irritated, she mentions how it is hard to be a female Jujutsu Sorcerer. Does she perhaps mean that sexism exists in the Jujutsu world as well? Or are there any drawbacks when it comes to cursed energy? Well, only time will tell!

The main course of this episode was served well; perfectly cooked, garnished and presented. JJK is blessed with amazing direction; the osts go so well with the fight sequences, the animation is clean and the flow is just right. For me, you can only find flaws in this if you’re going to nitpick things.

Mechamaru being a robot thing has swords in his right hand and can fire off fire blasts varying in strength. As power increases, build-up and cooldown period increase as well. This is a good give and take, making the character balanced. Being a ranged fight would give him the advantage over Panda, right?

No! Because Panda is not a Panda! (Yes, I already love this dialogue.)

Panda is a very versatile fighter; he is tanky yet agile. He also has good physical strength to compliment his bulk and agility. Watching these two fight almost felt like I was watching a professional Tekken match.

Panda is a cursed corpse, created by Jujutsu Tech’s principal.  He also states that every cursed object has a “soul” or a “core”, which provides the cursed object with emotions (which generate cursed energy).

Having three cores makes Panda the best cursed corpse in the Jujutsu world.

Let’s understand the cores in detail:

Panda always had the situation under control and managed to defeat a semi-first grade sorcerer while he is a second-grade sorcerer himself! He is calm and analytical, always predicting the range of his opponent’s attacks and also calculating an attack’s strength and line of fire so that his teammates are not taken down by a surprise attack.

He also fooled Mechamaru into believing that he hit Panda’s core every time but couldn’t deal enough damage.

While Mechamaru wanted to deal serious damage to Panda, the latter never felt so. Panda also tells Mechamaru that having a more painful life than someone else doesn’t make him right. Panda also says that he’d be glad to help our master of puppets. Oh, he also asked his opponent for his phone to call….

The episode ends with Maki fighting Miwa, which will be continued in the next episode. We also got more insights about JJK’s power system and dwelled deeper into the side characters, which is a must in every series. The Tokyo Sister’s Exchange Meet has picked up the pace and I’m all for it. I’m excited to know more about all the side characters; exchange meet/exam arcs are always used in battle shonen to give more screen time to the side characters and flesh them out, so I’m intrigued if the author decided to do something unconventional here or not.

Well, only time will tell what happens next! What do you think about the episode? Do you love it, like it or hate it? Let us know in the comments and keep watching Jujutsu Kaisen!