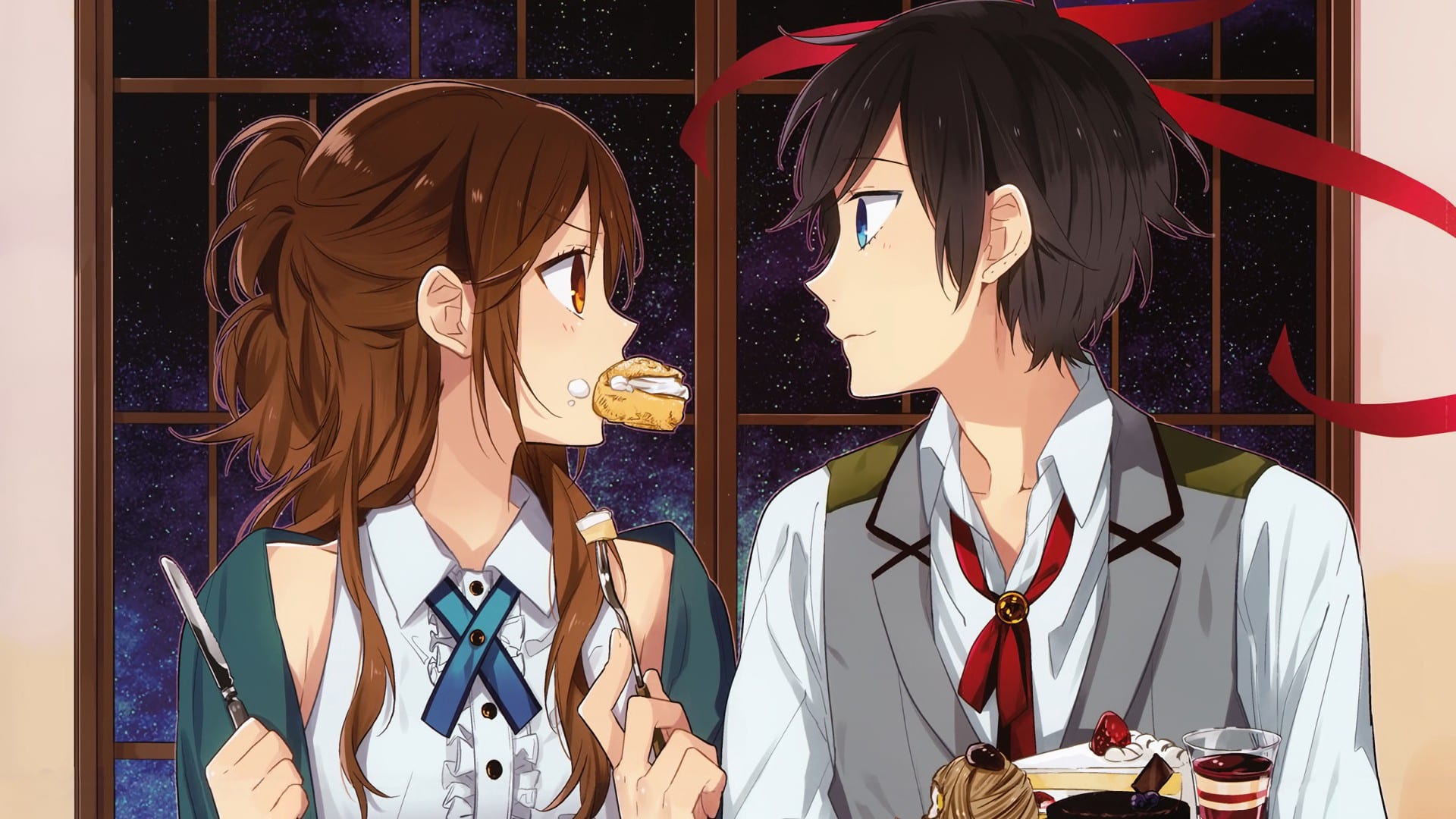 There are epic shonen and well-crafted seinen but there isn’t a show which without diving deep explores romance on a very grounded level. A high school romance show which doesn’t need groundbreaking notions or some tragic backstories but instead relies on something very simple. That simple facet being the realistic nature of love and organically discovering each other; through subtleties. And while we do have Oregairu in the upper echelons, 2021 welcomes another top-notch contender, Horimiya.

Although admired at school for her amiability and academic prowess, Kyoko Hori has been hiding another side of her. She rushes out of school instead of spending time with her friends. Meanwhile, Izumi Miyamura is seen as a gloomy, four eyes otaku. And like Hori, he has been hiding a side of his too. By sheer chance, they cross paths outside the school and uncover each other’s unknown side. These seemingly polar opposites become friends, sharing a side that they have never shown to anyone else.

I forgot when was the last time I enjoyed every minute of the first episode of some rom-com. Not a huge sucker of the genre but I have watched a fair share from the lot. More often than not, it has turned out to be a bit boring and wasn’t able to hook me up for the next episode. But Horimiya, right off the bat enthralls me in its charisma. The natural conversation of the characters along with the realistic flow of events just completely amazed me.

Last time, I was this happy was when Hachiman delivered his monologue on youth in the very first episode.

Horimiya’s approach towards romance is built around something truly grounded and unique in its own way. It explores how people tend to switch their personalities when they are in a particular social circle.

Hori is this popular and amiable girl in her school but at home, she is completely a different being. She is responsible for almost all the house chores and also for her brother Souta. Meanwhile, Miyamura also has a side unknown to everyone around him. He has tattoos on his back in addition to 9 piercings. This narrative puts a greater emphasis on ‘everyone has a side which they don’t want anyone to know about’.

The ‘double side’ facet of the show is very crucial to the foundation of Hori and Miyamura’s friendship which will propel the notion of romance later on. They both know a side of each other which no one knows about, creating a special bond between them. The intimacy unravels with gags and everyday eventful lives at Hori’s household.

The leads share a great dynamic between them, it’s soothing to watch them. The first two episodes do a splendid job of setting up the story in an engaging manner. As a manga reader, I can nitpick about a few things but for now, it’s looking really solid and will only get better from hereon.

The Direction, Animation and Music:

The direction of Horimiya is helmed by Masashi Ishihama, known for his exceptional work in Shinsekai Yori. And yes, everything up till now has been handled pretty well by Ishihama.

The imminent fast cuts and the neat visual style he propagated works well with the material at hand.

Cloverworks is on a roll, Horimiya is one of their three anime airing this season. The animation has a great production value and is aesthetic at times.

The music is backed up by Masaru Yokoyama. He’s known for his spectacular work in the likes of Fruits Basket, Your Lie in April and Plastic Memories. The OST is gentle, rich and euphonious; which gives off a comforting tone to every dialogue.

Final Thoughts on The Show:

Horimiya’s initial episodes are nothing short of delightful. It sets up the tone of the story in the most engaging manner. The simple and pleasant characters on the screen have a beautiful dynamic among them.

It’s a great source material in the hands of an amazing director. And the manga has a high reputation among the fans of rom-com. In all, Horimiya just stands out the most this season and it has a very good reason to be.

PS: Ah yes, the OP is quite dramatic, don’t be swayed away by it.

A Reflective Rundown On Mushoku Tensei

Redo Of A Healer – A Callous Controversy

Twice: A Man Nurtured by Circumstances