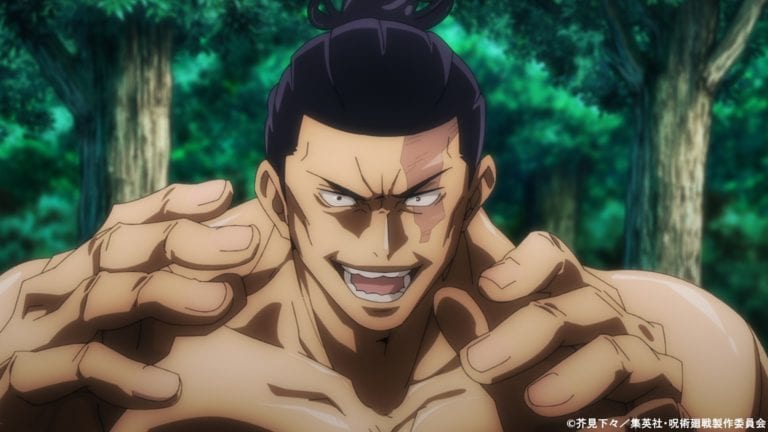 Jujutsu Kaisen episode 15 officially marks the start of the Tokyo Sister’s Exchange Meet Event and I’m all for it! With the even starting, I expected a few things out of the episode: Toudo vs Itadori, Toudo’s important question and hopefully see the characters display their strength and well, I’m definitely not disappointed!

The episode starts with Gojou-Sensei announcing the start of the meet, after teasing his senpai Utahime Iori a bit, of course.

We first see the Jujutsu Tech team talking about their strategy, they have formed two teams; team Panda and Team Megumi and Itadori playing a special role. Then, Todou makes his aggressive entry, screaming at his opponents to fight him together! Before anybody even moves, Itadori runs towards Todou and hits him with a knee to the face!

Everybody else scatters into their respective teams and moves ahead, but why?

They know that Todou will not think about anything other than a direct fight. While they initially planned to keep Panda or Megumi as a decoy, Itadori’s surprise survival meant a change in the plan. Even though the seniors stated that they do not expect much from Itadori and that it’s fine even if he runs away from Todou, our protagonist says that he’ll win, because that’s what a protagonist does!

Coming back to the fight, Todou praises Itadori for delivering a good blow and Itadori has understood how strong Todou is now; as the huge guy didn’t take remarkable damage from his attack.

Todou charges towards Itadori to deliver a straight punch but a cursed spirit similar to a spider step in and says the normal “where do you think you’re going” stuff, only to be decimated by our big guy’s punch, which also sent Itadori flying even after he tried to block.

The punch was so strong that Itadori couldn’t believe that his hands were still intact. As soon as he was back to reality, Todou starts to violently stomp on Itadori with an evil grin on his face. The kicks were so brutal that Itadori’s head started bleeding after just a few stomps!

Witnessing that Itadori is not moving, Todou stops and feels disappointed. Wait, you really thought that Itadori lost so easily?

Itadori gets up, with an angered look on his face, even shocking Todou and says “You think that you can just pound away at my head like that?! What if you made me even dumber than I am?!”

Yeah… He had me in the first half, not gonna lie. Well, it certainly is one the top of the list of things Itadori would do for sure.“Men are perfect when they’re a little dumb”, Todo replies; apparently Takada-Chan said this. Well, I think she meant that men who are a little dumb would be profitable for her, as they’d buy anything with their favourite Idol mentioned on it and pay a lot to meet them…. I wouldn’t dare to say that to Todou though.

Todou asks “What’s your type of woman” to Itadori! Yes! The anime council wants to know!

Itadori answers, “A tall woman with a big ass”. Well, it seems like Todou finally found his best buddy! Just hearing that answer leads to Todou imagining his friendship with Itadori. *Slice of life anime ost starts playing with nostalgic school memory filter on the screen*

The normal lives of two Sorcerers:

The two are best buddies at school, reading the new manga series that has come out on the school’s roof and enjoying their youth. Todou tells Itadori that he is going to confess to Takada-Chan and Itadori yells at him to not do so, as he doesn’t wanna comfort Todou after he’s rejected.

Todou still confesses to Takada-Chan, who rejects him as he tears his love letter; BRUTAL. She didn’t need to do that to our boy Todou! So mean! I like how Todou is imagining getting rejected by Takada-Chan; he likes to dream, but he dreams realistically.

Itadori treats his sad, big friend to ramen to get him over the rejection. Ah, friendship. We’re back to reality and Todou is crying heavily; he is so glad that Itadori is his best friend, wow. This whole sequence is gold!

The other members interfere and start to attack Itadori while Todou was imagining. (Ugh! He was having a blast!) As soon as Itadori had a few moments to think, he realized that they intend to kill him.

Just when the Kyoto team was going to attack, Itadori swaps places with Kamo, who was on a tree! Itadori is beyond confused! It is then revealed by Kamo that this is Toudou’s ability, which he witnessed for the first time as well.

It seems like Todou’s ability allows him to swap people and possibly objects as well. However, we don’t know if he can use it on himself as of now.

This ability is insane, especially for someone like Todou; he’s one of the last people whom we could expect to have such an ability, considering his insane brute strength and aggressive fight style. While this is the only moment where he has used this ability so far, I think that this ability would fit Todou’s aggressive fighting style like a glove. Usually, such abilities have a short-range, making them tough to use at times. However, in Todou’s case, he’s always engaging in close combat, making this ability an important tool. He could switch the enemy’s place with something else mid-combat, successfully dodging an attack and bewildering them as well. As I said, there is little to nothing known about his abilities so far, so it’s tough to guess.

However, if you remember the opening, there’s a scene in it where Itadori switches places to dodge a cursed spirits attack (possibly the second-grade spirit the teams are supposed to fight in the event), hinting towards a temporary alliance.

Todou is furious at his team members for interfering and demands them to leave or he will kill them. Knowing Todou, they decide to leave and focus on the event instead. While four of the Kyoto members (Komi, Mai, Muta and Miwa) were travelling on foot, Nishimiya was scouting from above, flying in the air with a broomstick like a witch. Nishimiya has identified that the team’s off to a rocky start and she has to fix it. As soon as she starts to move ahead, she is attacked by Megumi’s Nue who attacks her. Witnessing this, Mai and the wooden puppet thingy separate with the other two to rescue her as Mai states that she is a crucial part of the team.

While Itadori was fighting, his teammates weren’t sitting still either, as Panda and Nobara were on the run to hunt Nishimiya and Toge was eliminating any cursed spirits he could find. This scene is hilarious, I love how they’re teasing Nishimiya.

Now, we’re back to Itadori fighting Todou. Todou keeps on praising Itadori for his dynamic fighting style, which goes even better with his insane base strength. The fight sequence here is done well, with a constant switch between povs of the characters and a third-person look, making the watcher feel the blows themselves.

While Todo loves Itadori’s fighting style, he hates Itadori’s use of cursed energy. He says that the lag between his cursed energy’s flow and the physical impact is making Itadori significantly weaker and wants to help Itadori to change that.

Him screaming “wrong” got the attention of Mai and Miwa as well, who were about to start sparring. Miwa also states that she doesn’t want to participate in the assassination of Itadori and is only doing all of this for a recommendation. The episode ends with Itadori activating his divergent fists to fight Todou.

Overall, this was a pretty good episode which will only increase the excitement about the exchange event in the fans. The animation was on point, as usual, the fights scenes were handled well, the transitions were smooth, the comedy was hitting the right spots and the osts just keep on getting better. I’m not going to lie, I re-watched the episode just to listen to the osts. I am a bit too excited about the next few episodes, I can barely manage to wait for a week. It’s going to be amazing as we learn more about the side characters and see Itadori grow.