Skip to content
Home » Series » What Is The Importance Of “Gupna” In The Promised Neverland?
Series 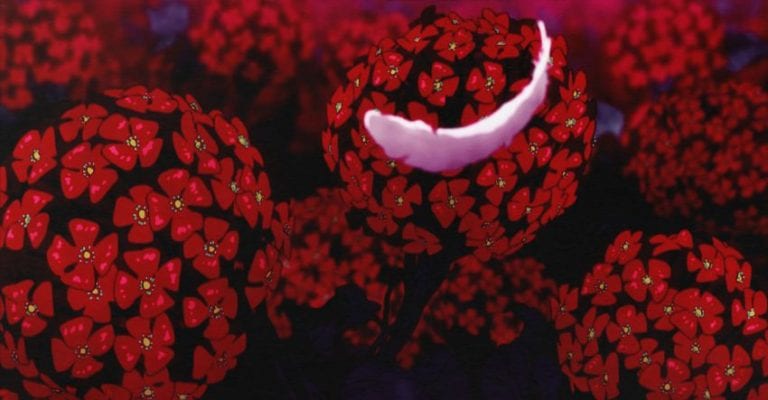 The flower “Vida” or “Vidar” is prominently shown in the opening, ending, and all other death scenes in The Promised Neverland. Now, in The Promised Neverland Season 2 Episode 2 we get a clear idea of what it really signifies. Death. Just like Spider Lilies are pre-dominant in scenes of death or foreshadowing death in most Japanese storytellings, Yakusoku no Neverland uses Vida as their death flag.

In Portuguese and Spanish, Vida means “life”, which is ironic, since the plant takes away the life of its host. Vida are flowers of a vampiric plant that takes in human blood for a full bloom. This unusual flower most likely is inspired by Geranium according to Atelier Emily’s post.

“These flowers reminded me of geraniums, and the geranium flower has a few interesting floral meanings that could tie into what we could see from The Promised Neverland. Perhaps a geranium served as inspiration for the Vidar.”

The most alarming way this plant has been introduced in the series was as early as Episode1 Season1 of The Promised Neverland. When Conny was shipped to the demons she had a full blossomed Vida plant stuck to her heart. This scene makes us grasp the horror hidden in this seemingly innocent series. And so comes the question what is the meaning of the flower in Neverland? Later in Season 2 Episode 2, we get the revelation from one of the new characters in the series Sonju. The answer is Gupna.

Contents hide
What is Gupna?
What is the importance of Gupna?
TL;DR

Gupna is a ritual followed by the Demons where they stab the Vida plant in the heart of their game as a “sacrifice” to God while it is still warm and alive before eating themselves. As for hunting purposes, Sonju teaches Emma that it also helps to draw out the blood completely and preserve the meat for a longer time.

What is the importance of Gupna?

Episode 2 marks a very important role in the story of Yakusoku no Neverland. We find out about the secrets of the world for the very first time. And amidst the notable information Sonju offers other than the history of the Two Worlds; is the concept of “faith” which shows the Human side of the Demons.

Until now, we considered these man-eating demons as barbaric and ruffians who drool at the smell of intelligent little children. But as we see the story progress, Demons are actually not so different from Humans. Exceptions being Sonju and Mujica. Just like Humans eat other species, Demons also rely on Humans for their nutrition. A food chain created by God.

And here is where things get interesting. The most astonishing information that surprises Emma and us is the knowledge of an Almighty God whom they respect and thank for the meal just like humans. Thus, Gupna is an important ritual for the Demons. They believe if God accepts their sacrifice first, then only they are allowed to have their meal.

People of certain religious faiths also believe in sacrifices in certain countries. Thus, giving the Demons a human value or say a common link between the two sides.

It is certain that we will see more of this parasitic plant later in the show, as it is even in the logo of The Promised Neverland series. The Vida is spotted on top of the Kanji 束. The Vida is also within the letter O of the word “PrOmised”.

So these were our insights on the Vida plant and the Gupna ritual of The Promised Neverland. What else does the new season has in store? Know here. Let us know your opinions and theories on the latest episodes in the comments!