Boruto: What Sasuke’s Reaction At The End Of Chapter 54 Could Mean? 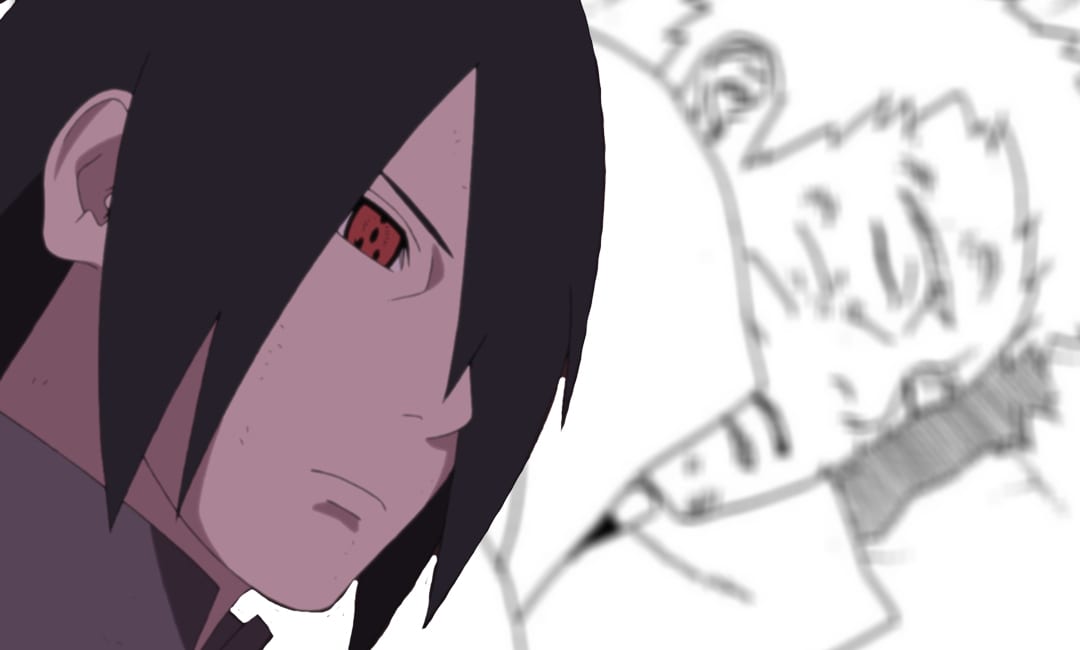 Another Boruto chapter, another cliffhanger to ponder about. If there’s one thing that has been absolutely on point about the Boruto Manga; it’s cliffhangers at the end of everychapter; which absolutely does not disappoint. Chapter 54 of Boruto manga too had a similar incident that will make you pull your hair out thinking what could happen.

The following article contains spoilers from chapter 54 of Boruto manga. Read ahead at your own discretion!

While Kawaki and Sasuke were facing off with Momoshiki who had manifested in Boruto’s body, Naruto passes out. This was probably due to the after effects of the Baryon Mode. Though the suicidal technique had been put to a halt, it still seems have weakened Naruto beyond hope. Sasuke ignores Naruto’s condition initially, focusing on the fight against Momoshiki.

However, after Boruto ragains control of his body, Sasuke notices something off about Naruto and this surprises him. What could possibly be the reason for Sasuke’s reaction at the end of chapter 54?

Well, there are multiple possibilities at this point. Most of these are assumptions, some even outrageously wild. Let’s look at a couple of them!

There have been theories going around for sometime that Kurama could be dead. The most common ones assume that he lied to Naruto about the specifics of Baryon Mode. The Nine-Tailed Fox could have ended up sacrificing his life in order to save the day. But knowing full well that Naruto won’t acept such a plan, Kurama could have lied to him about both of them losing their chakra.

If Kurama is indeed dead, then Sasuke could have sensed his chakra signature missing. Remember that Sasuke is able to sense Kurama’s presence through his Sharingan.

But why would it make him surprised? Because the jinchuriki cannot survive for long if the tailed beast inside them dies. Meaning, Naruto himself could be in a perilious state. This would explain why Sasuke looked surprised and scared at the end of chapter 54.

However, Naruto may not die, because he has the vestiges of the other tailed beasts in him. This may help him prolong his life till Kurama appears again, if our much loved fox is indeed dead. It surely would be a bitter pill to swallow!

Chapter 54 of Boruto all but confirmed that Ishhiki Ohtsutsuki has been wiped out of existence. But despite that some fans believe that he may somehow have imparted a karma seal to Naruto before dying. This is one of those outrageous theories that has been making rounds on Reddit and other platforms.

Can Naruto Beat Hashirama Without Kurama? (2021)

While this theory is certainly intriguing, there were no instances that pointed to Isshiki trying to implant a karma seal on Naruto. The only time he could have tried to plant the karma seal was when he punched Naruto to stop the Baryon mode. And Naruto’s hands/body did not seem to have any weird Karma markings for now. But as the fandom says, it would be a crazy twist if this happens. That would also explain Sasuke’s surprise, knowing that all their efforts were futile and Ishhiki still continues to live on!

Ok, this is an outcome that no Naruto fanboi wants to be real. Naruto’s death has been teased ever since Kurama suggested the use of Baryon Mode to counter Isshiki’s threat. While his death is a very real possibility, it does not fit in with Kawaki’s dialogue at the flashforward scene. In this scene, Kawaki tells Boruto that he’ll send him to the same place that he sent Lord Seventh.

Now, this could be a metaphorical way of saying that Kawaki will Boruto to his afterlife. But then again, it doesn’t make much of a sense, considering how Kawaki won’t be responsible if Naruto dies now.

It could be possible that Naruto is in a comatose state. Sasuke’s reaction could also have stemmed from the realisation that Naruto was very close to death.

What could be the reason for Sasuke’s reaction at the end of chapter 54? Let us know your opinions in the comments section!

How Strong Is Naruto In Boruto Without Kurama? (2021)

How To Watch Naruto Series? Complete Guide In Order