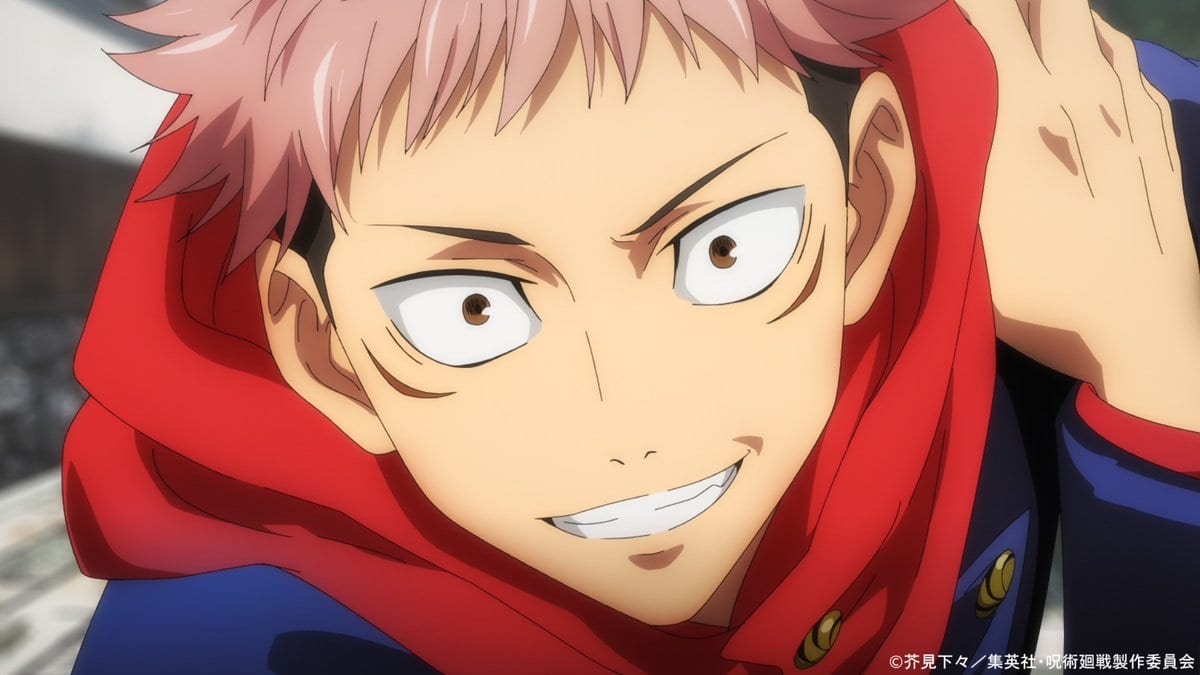 After a two-week break, Jujutsu Kaisen, one of the most anticipated series of 2020 is back with a bang! The first cour ended with Itadori Yuuji and Nanami fighting Mahito, where the latter managed to escape by an inch.

Without any further ado, let’s dig right into the episode!

The episode starts with Jogo, Mahito and Getou discussing their plans regarding Sukuna. Jogo seems to have healed quite a bit, with just a limb or two left.

On the other hand, Jogo pointed out that Mahito seemed to be terribly exhausted, implying that Mahito is still recovering from his fight against Nanami and Itadori. He also admits that Sukuna is crucial for the curse society, and agrees to Getou’s plan of awakening Sukuna.

Getou believes that the three and their group should collect at of Sukuna’s fingers and then present it to Sukuna himself; risking their lives as Sukuna’s restoration in full power is crucial for the curses to rise. He then says that they’ll start by capturing the six fingers that the Jujutsu schools hold. Here, Mahito also talks about how he could’ve used Junpei better while referring to him as a “toy” or “thing”.

The next scene shifts to Nanami and Gojo-Sensei talking, as Gojo sensei is as chill as ever. They also talk a bit about Itadori and he pops up to as Gojo-Sensei about something.

After being away from his friends for almost two months, Itadori is eager to meet them again.

Gojo says that since he’s technically coming back from the dead, they should make his return grand, so grand and cool that global disappears… yeah
Then, we see the Jujutsu Tech students waiting for their sister school’s students.

Nobara is seen all packed up with luggage thinking that they were going to Kyoto. She couldn’t have been more wrong.

The container’s door is open, and ta-da! You guessed it right! It’s… Itadori Yuuji saying “O-op” (?)!

Nobara and Megumin are bewildered, it’s like they’ve seen a ghost (I’m sorry, I had to do it). There’s one word to describe the seniors’ reaction: “huh?”; while the sister school students are too busy wondering about the souvenir Gojo-Sensei gave.

Here, we also see Nobara demanding explanation and being teary-eyed after seeing Itadori back, how wholesome.

Fushigoro, on the other hand, is either trying to figure this out or he feels like this is something that Itadori could pull off. It’s kind of hard to tell.

The only person to be genuinely shocked to see Itadori is Yoshinobu Gakuganji, the principal of the Kyoto Jujutsu High; and Gojo-sensei loves it. He also makes fun of Gakuganji, saying that he’s glad that the old principal did not have a heart attack after seeing Itadori alive. This further implies the hate that the elders have for Sukuna’s vessel, Itadori.

With this, Itadori’s return didn’t even come close to how Gojo-Sensei said it would be!

For the first part of the Exchange event, the first even is a race, plus a team battle. Put simply, the Jujutsu sorcerers, have to defeat a second-grade curse and fight some other weaker curses on their way. If none of the teams manages to exorcise the second-grade curse by sundown, then the team with most elimination wins.

They’re free to sabotage other teams however they are not allowed to cause life-threatening/changing injuries and killing is strictly prohibited.

The teams plan their strategies:

The Kyoto school’s strategy is simple, kill Itadori Yuuji. As he is not considered to be “human” by the elders, they don’t mind if he dies during the event.

While most of them are fine with it, we do have some exceptions. Aoi Todo disagrees to join the lot in the assassination plan, as he clearly doesn’t like being ordered around. Moreover, it is important how he said “I’ll kill you” to Gakunganji, the principal of Kyoto High. This implies just how strong the newer generation of sorcerers is, especially the likes of Aoi Todo. We also see Kasuwi Miwa (the blue-haired Gojo fangirl) feeling reluctant about killing Itadori.

However, another thing to note is what Noritoshi Kamo said as he belongs to the family of one of these elders, he believes that Itadori shouldn’t be alive. This could be blind following but it does show how strong the elders’ hate for Itaodri is.

As for Jujutsu Tech, Itadori is getting bullied by Nobara, who is making him hold a frame for the deceased around his face.

Even after hearing Itadori’s side, she is still mad about it. Talk about wholesome.

We come to know more about Toge Inumaki’s cursed speech technique. When asked about his strengths, Itadori says that he can punch and kick. This guy really forgot about his divergent fists?

While the second-years were not impressed, Fushigoro states that if every student from Jujutsu Tech and Kyoto High were to fight together against Itadori with no cursed energy usage, then Itadori would win. This was enough for the seniors to forge a plan. We also see Fushigoro showing care towards Itadori and how he has changed and matured as well.

While the two teams were forging their strategies, Gojo talks to Iori, who is a teacher at Jujutsu High, Kyoto. She is a first-grade Jujutsu Sorcerer and is Gojo’s senior. Here, Gojo admits that Jujutsu High has a traitor, who is involved with either curse users or cursed spirit themselves.

It is crucial to note this down, as Iori will investigate this topic and it could be possible for Gojo to at least have a faint idea of who the impostor is.

This whole cour is going to be so amazing and I’m really excited. The animation is on point, the new opening and endings are amazing, the visuals and the songs are amazing.

I think that the ed in the best soundtrack from the series so far and visuals are really amazing, with the vertical shots giving a vlog kind of vibe, especially with the addition of current teenage/young adult aesthetic style of the ending.

The second cour will most likely cover the Kyoto Event Goodwill arc completely, as such arcs are staples in battle shounen series. The Hunter Exam Arc, Chunin Exams Arc and the U.A. Sports Festival Arc are some examples of such arcs.

I believe that Jujutsu Kaisen is only getting started and we have a long, long way to go. So, stick around as we cover JJK and all of your favourite animanga series!