In Review: Jujutsu Kaisen’s Much Loved New Opening And Ending! 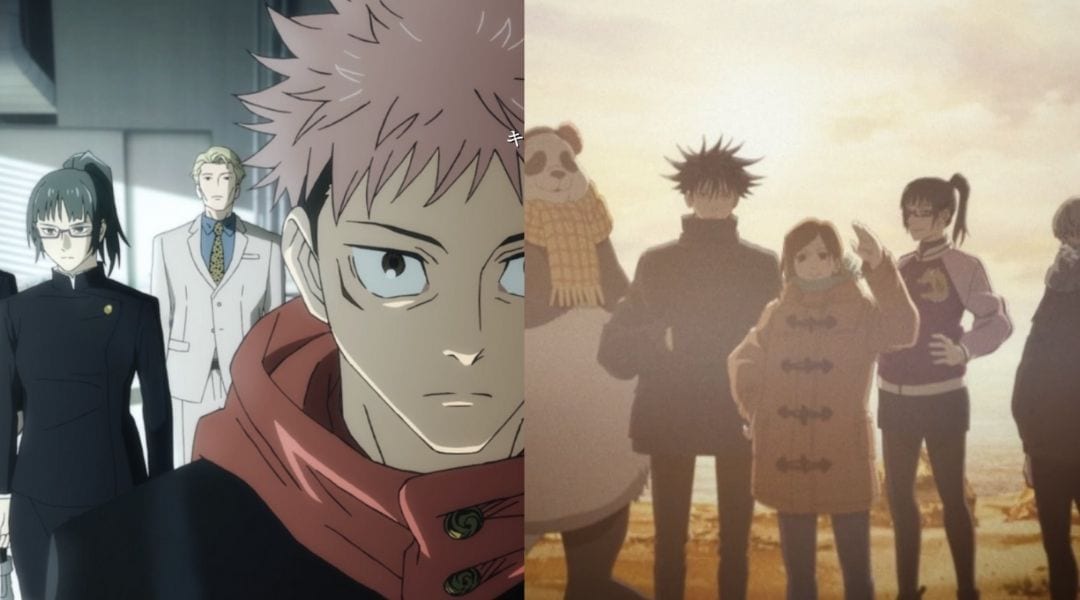 2021 is off to a great start, with a lot of long-awaited animes coming to life and some of our favorites returning with even better sequels. One such anime is Jujutsu Kaisen. Ever since season 1 of Jujutsu Kaisen has premiered, fans have been praising MAPPA for doing a great job at the adaptation of their beloved manga of the same name by Gege Akutami.

The show has climbed top spots in favorite shounens for a lot of people, and that is not for nothing. We can go on and on about the reasons behind the anime’s success but a huge factor that has appealed to its audience is Jujutsu Kaisen’s top-notch music.

The first cour blew our minds with high-quality animation in both the OP and ED songs 「Kaikai Kitan 」and 「 LOST IN PARADISE」 with equally amazing music to support it. Following suit, the first episode of the second cour (or episode 14th, if you will) marked the airing of an anticipated arc. But it sparked discussions all over the internet about one more thing: which OP & ED are better?

To be honest, I personally did not think anything could top 「 Kaikai Kitan」, but Jujutsu Kaisen is just the kind of anime that doesn’t stick to your expectations; it performs over & above them. The new OP 「 VIVID VICE」by Who-ya Extended is undoubtedly a banger.

Both the songs are similar in the sense of mellow rock, but just like the anime, they portray underlying serious themes that stir a certain kind of melancholy in you. The studio has also stepped-up the animation for the new OP from the previous season, making it a delight. There are several new characters in action in the sequence too, setting the perfect tone and excitement for the Festival Arc with the Kyoto and Tokyo schools facing-off.

The ED song 「Give it Back」by Cö shu Nie comes as a striking contrast to the previous cour’s upbeat and funky ED by ALI. With heartwarming but woeful serenade, we see Itadori Yuuji’s world through his own eyes. The emptiness that he has is reflected in the animated sequence but is then shown to be filled up by his friends. It goes to show just how dear Yuuji holds his friends, especially after the most recent incident making him lose Junpei.

The song’s lyrics are just the right amount of sad to make you bawl your eyes out while being nostalgic for things that didn’t even happen! 😀

Both the animation sequences are riddled with a bunch of Easter eggs!

*rubs hands* How are we holding up, manga readers? Let’s get down to business! The new animation sequences are just MAPPA and Gege flexing on all the manga readers while profusely rubbing salt in the wounds. Every moment hurt!

So, about the OP. First and foremost, the opening sequence has shots of our best boy, Okkotsu Yuuta! I absolutely can’t wait for him to actually show up in the story.

We also catch a glimpse of Utahime looking for something in the forest, which probably signifies her looking for the Kyoto School traitor. We see Panda’s gorilla form at the beginning of the sequence itself. I am not going to lie; every shot with Nanamin hurt me so much. There are also some crumbs of Mei Mei appearing with her crows. Throughout the sequence, Mahito being shown repeatedly fortifies his presence in the upcoming arcs.

We also see someone playing the guitar near the end, hinting at the cursed technique of Kyoto’s ojichan, Gakuganji. Noritoshi Kamo’s scenes in the OP seem all the more important after the recent revelations about Getou.

The ending is just a crying fest. We know the running gag that every anime has a beach scene, but this ending sequence hit way too hard. The Shibuya Arc has left all of our hearts in pieces, and MAPPA sure knows how to make us weep. Losing some of his most cherished people and not being able to suppress Sukuna against his rampage took his toll on Yuuji and all of us. The ending just makes you clutch at your emotions because you know how bad everything is going to become soon.

The glimpses of upcoming fights with foreshadows of Purple Lightning and Black Flash have just pumped up my excitement to see some fabulous (and heartbreaking) moments get animated. I wonder if the Origin of Obedience arc will start in this season or not.

What about you? Did you like the new OP and ED even more than the previous ones? Let us know in the comments below!