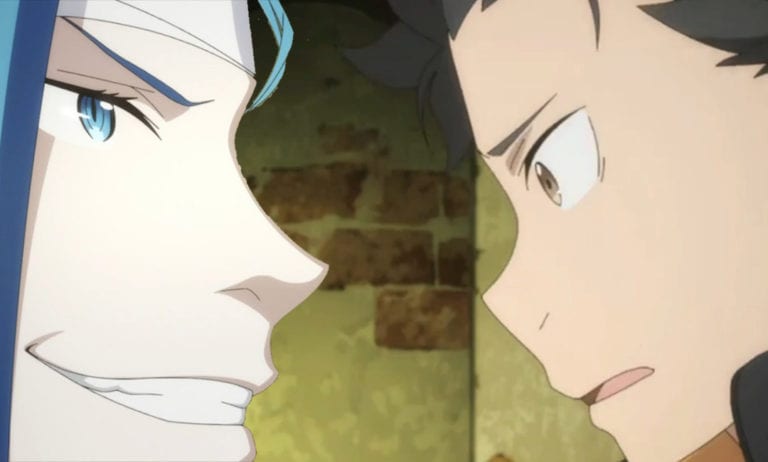 The following article contains spoilers for the second season of Re:Zero. Read ahead at your own discretion!

The first episode of Re:Zero Season 2 Part 2 begins with a bang, as Subaru makes a bet with Roswaal L. Mather. Why is this bet so significant you ask? It’s because this bet signifies a complete change in Subaru’s attitude.

In Arc 4 of Re:Zero (the Sanctuary arc), fans are made aware of Roswaal’s sinister plans. He has been scheming and plotting with the help of the gospel in order to make things go his way. Roswaal intended to push Subaru to his limits and break his heart so that he would only be dedicated to Emilia’s cause. Killing Ram and Garfiel was also supposed to contribute to this.

When Subaru realises that Roswaal was responsible for hiring Elsa and also for the Great Rabbit attack at the sanctuary, he loses all hope. Broken and lost, Subaru stumbles upon Otto. It is here that Subaru decides to rely on his friends and starts on a new path again. After learning the truth about Roswaal, he was looking for a way to run away from the Sanctuary. But he makes up his mind and places a bet with Roswaal.

Contents hide
Subaru and Roswaal’s bet:
How did Subaru convince Roswaal to take the bet:

Subaru’s bet with Roswaal involved the things that mattered the most to them. Subaru bets that he would save both the sanctuary and the mansion in this loop. If he is able to do so Roswaal will have to give up the Gospel and his scheming and support Subaru. And if he fails, he would adhere to the plan that Roswaal has made for him.

The bet marks a considerable character development in Subaru. Roswaal was forcing him to steele his resolve and rely only on himself to shape the future by using Return by Death. This proved to be too much of a burden for Subaru. He was on the verge of losing his mind and giving up again. However, his meeting with Otto, coupled with his encounter with Satella in the witches’ tea party, changed Subaru’s outlook completely.

He would value his life more from this point on and he would rely on his friends to accomplish his goals. This way, he need not turn into the mindless person that Roswaal wanted him to be.

Winning the bet would also allow him to have Roswaal on his side, thus converting a major foe into a strong ally. Roswaal had revealed himself to be the single most important obstacle in Subaru’s path. This bet helped him achieve two things in one shot. Save everyone and also gain a strong ally to counter even serious threats in the futre. this is one of the primary reasons why Subaru decides to place a bet with Roswaal.

How did Subaru convince Roswaal to take the bet:

Roswaal has been scheming and manipulating things so that he could achieve his sinister end goal. By using the gospel, he is forcing events to happen in a particular way. He was aware of Subaru’s ability to loop and intended to use it for his benefit. However, each time Subaru used the Return by Death, these events would deviate from Roswaal’s plans. This irked him.

The mage wanted to use Subaru for his own personal gains. And for that, Subaru had to be absolutely focused on making Emilia the ruler. Roswaal wanted Subaru to break all his connections, shed all his feelings and only work for the best possible outcome for Emilia. This was similar to the contract that Echidna proposed to him.

But Subaru had made up his mind. He was hellbent on saving everyone. This pushed Roswaal into engineering a situation, by hiring Elsa, where Subaru would be forced to make a choice. Will he choose to stay with Emilia and liberate the Sanctuary or would he save Rem, Beatrice and others at the mansion? Roswaal knew that Subaru would not ignore Emilia, since he loved her the most. So he planned things in a way that Subaru would fail unless he focused on saving only one, which would eventually be Emilia. Roswaal intended Subaru to fail so much that in the end he would just give up saving the people at the mansion.

But even after failing multiple times, Subaru refused to give up. This made Roswaal question Subaru’s determination and resolve. The resolve to cut off anything and everything for the person you love the most. Roswaal believed that he may have to come up with something more sinister to break Subaru’s mind.

How will Subaru save both the Sanctuary and the mansion? Will Roswaal really turn out to be an ally at the end? Let us know your thoughts in the comments section!