Studio Ghibli is one of the most adored Japanese animation film Studio which has impacted the lives of many through its movies. All of the films are family-friendly and deep-rooted in wisdom and surrealism. Hayao Miyazaki’s films are not always full of magic and surreal moments. Some of them explore the harsh reality of the … 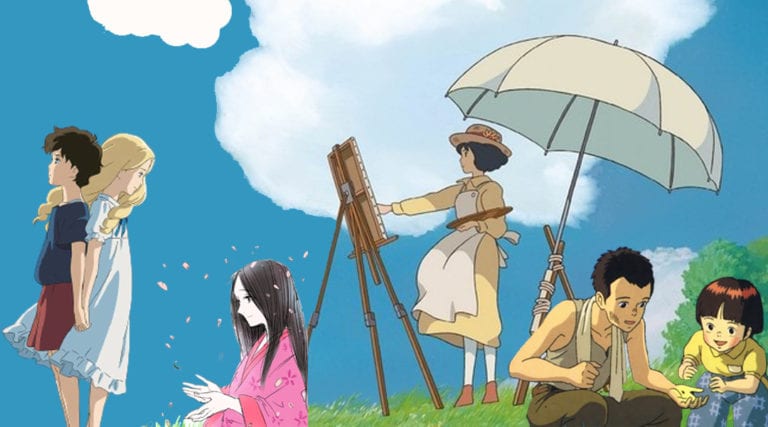 Studio Ghibli is one of the most adored Japanese animation film Studio which has impacted the lives of many through its movies. All of the films are family-friendly and deep-rooted in wisdom and surrealism. Hayao Miyazaki’s films are not always full of magic and surreal moments. Some of them explore the harsh reality of the world we live in a subtle way, while others put forth the pain that we experience due to separation and other aspects in our daily lives.

That said, here are some of the saddest Ghibli movies, which according to us are guaranteed to make you cry!

Contents hide
1. Grave of the Fireflies:
2. The Tale of Princess Kaguya
3. The Wind Rises:
4. When Marnie was there:

1. Grave of the Fireflies:

Grave of the Fireflies is hands down the saddest and one of the most depressing Ghibli movies ever. It is based on Hayao Miyazaki’s own war stricken childhood, making it dark and horrifyingly tragic. The film by Isao Takahata depicts a clear picture of the horrors of World War II, where everyone is trying to survive. They only fend for themselves, showing little to no charity towards others.

The story revolves around the main characters Saito and Setsuko who were left alone in a selfish world trying to survive on their own in an abandoned bomb shelter when their parents failed to protect them. The degree of misery and betrayal shown in this 2D world is greatly relatable to real-life situations. It paints a gruesome picture of people and their true nature in hard times.

Saito was a young boy who aspired to be a soldier like his father. But after everything was taken away, his sole focus was his sister Setsuko. When his aunt encouraged him to do his bit for the country, Saito thought his sister was everything that matters. He was ready to do anything to keep her well, even if that means stealing in order to get enough food. But the problem was the farmer from whom he stole was also fighting to survive in this trying time. The doctors have also lost compassion for the living, and have cold heartedly done their job without extra indulgence. Despite these instances, the darkest character was the Aunt. Her attitude towards children changed drastically. It went from considerate relative to seeing them as a deadweight; especially when Saito couldn’t repay her for her hospitality.

Although the film tried to present a realistic setting, there was also a strong spiritual note as we see fireflies throughout the film. This is where viewers mark the movie as the most saddest Ghibli movie of all time. These fireflies represent the soul of people and the glow they emit is life itself. A brilliant contrast was drawn in the poster of the film which shows Saito and Setsuko watching the glowing bugs with U.S. fire bombs falling from the sky. This instantly sets the theme of the overall movie. And out of the several bittersweet moments that will bring tears to your eyes, the last scene of the film speaks a ton where the siblings sit on a bench watching over modern day Japan thriving full of life.

2. The Tale of Princess Kaguya

Isao Takahata’s last movie The Tale of Princess Kaguya was adapted from Japan’s oldest existing folklore “The Tale of the Bamboo cutter”. It needs more recognition than Takahata’s other famous work Grave of the fireflies; as this movie’s animation and music are sky apart from what Studio Ghibli had done before or will do after.

In  this film, Takahata abandoned the Ghibli style reverting to a style which focuses on emotion rather than the details. He wanted to showcase the raw passion of the artist and embody the emotions through abstraction. We get to see this idea when Kaguya’s lines were reduced to rough and chaotic, revealing her inner frustrations and turmoil.

Even though “The Tale of the Bamboo Cutter” is well known all over the world, Takahata wanted to show from Kaguya’s perspective in this film. The emotions, the aspects that suppress Kaguya don’t stem from one individual, but it is from being a part of a society. He wanted to show the oppression on Kaguya’s freewill as a representation of how reality weighs us all down. Despite this, he used the tragic life of the princess to elevate an essential part of life, which is learning to appreciate everything you can in the face of all the hardships.

Hayao Miyazaki’s love for aircrafts and his use of flight as an element in many of his films has come from his family business. Miyazaki’s father owned a plane manufacturing firm named Miyazaki Airplane during World War II. Tey helped put together the Mitsubishi A6M Zero planes- possibly the most destructive weapon Japan ever had. He also drew inspiration in this film from his mother, who suffered from tuberculosis which she survived; but spent many years in the hospital. Thus, accumulating all these aspects from his own life into the biographical film of Jiro Horikoshi, the man who designed the deadly Mitsubishi A6M Zero.

The film lacks all the magical components that signifies Studio Ghibli films and instead replaces them with historical moments-from the 1923 Great Kanto earthquake to Jiro’s aviation idol Giovanni Caproni. It might leave out a great number of children but it is a masterpiece for most young adults.

The main plot goes around Jiro and his desire for aviation. In a scene, Giovanni asks Jiro if he wants a world with or without pyramids. This idea states that innovations and technology, designing aircrafts in this case, may not be used in the way Jiro desires. As a matter of fact, Hirokoshi never actually wanted to build planes to fight wars, rather he wanted to create something beautiful for himself. Yet he is hopeful for the future of innovation even if it becomes “a cursed dream”.

On the other hand, when he meets Naoko, he finds a new kind of love. Watching them flirting and throwing romantic tactics in these dark times was kind of uplifting. Even when Jiro knew Naoko has tuberculosis, and she is getting sicker, he married her just to stay close. He tried his best to show that nothing is wrong with this life and did his best to hold on to his two absolutely favourite things in a false hope.

The Wind Rises, a masterpiece of a film, is also one of the saddest Ghibli movie because not only it shows the downsides of war but also the harmfulness of a one-track mind. If Jiro saw the bigger picture around him and reassessed his situation, spent more time with his wife, he could have been a little more happier.

4. When Marnie was there:

Based on a Western Novel Series by Joan G. Robinson of the same name “ When Marnie was there”, Hiromasa Yonebayashi created this film under the banner of Studio Ghibli.

Unlike other confident strong independent female protagonists of Ghibli films, the story features Sasaki Anna, a young girl dealing with a childhood trauma of her family and having no one to look up to and coming to terms with her abandonment issues. It is a tale of surrendering to forces bigger than us, which ends with Anna accepting everything and smiling it off.

So who is Marnie? The first contact that Anna has with Marnie is in her dreams. A little blonde girl almost the same age as Anna. When she tells Marnie about these dreams Marnie tells her that “they are not dreams”. Both the girls become close friends, as they spend time together, sharing life issues;but hearing Hisako’s story it becomes clear who Marnie really is.

The writer here used time as an important tool to unite these to girls in a spirit land, that’s why Marnie was always confined to the Marsh House grounds. No matter what, she couldn’t leave it.

What we see throughout the movie is an choreography of overlapping timelines.All the events that take place, the party, the midnight row with Anna in it, actually took place in Marnie’s time which we got proved when Sayaka discovers Marnie’s old diary, but without the mention of Anna. This overlapping timeline was triggered by the first time Anna saw the Marsh house and the rest is only affecting her in her own mind. That’s why Marnie says Anna “ to keep their meeting a secret”.

Thus even though the story is dark and brightened by minute specks of Anna and Marnie intimate moments, this movie of past and present clashing is truly beautiful.

Studio Ghibli does marvel is bringing forth magic realism where we lose ourselves in the world of strong relatable characters as if made from flesh and blood. The situations they face, the way they move and the dialogues give an immense sense of impact for which Ghibli will always be our favourite. These four movies are some of the tragic masterpieces among the several others which will be always close to our heart.