Skip to content
Home » Series » Black Clover » What Does It Mean To Be A Devil Host In Black Clover? 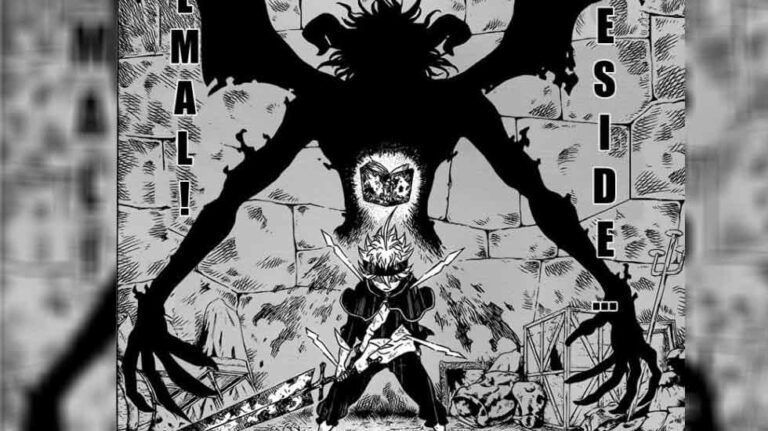 There are different kinds of people in Black Clover, but there are different species and entities too; elves and humans being the prime example. However, the Black Clover world is incomplete without devils. This story’s very foundation begins with our MC, Asta, finding a grimoire with a devil.

Although we pretty much know everything about the elves and humans, the sinister devils from the darkness remain a mystery. Let’s throw some light (humor, LOL) on these devils then, as the dangers they pose to the Black Clover world are very prominent.

Contents hide
About the devils
What is a devil host?
The known devil hosts in Black Clover as of now are:
How does being a devil host work?
The Devil-Binding Ritual
Does Asta have a devil in him? Is Asta a Devil Host?

The devils are magical species existing from time immortal. They are born in the Underworld, where there is an established social hierarchy. This hierarchy is also called ‘ranks,’ and the higher the rank, the more powerful is the devil. This rank is assigned and birth and is unchangeable. Since there is nothing to do in the Underworld, the higher-ranking devils oppress and torture the lower-ranking devils. The devils of the Tree of Qliphoth are referred to as the strongest ones of the Underworld.

Their magic is evil and ominous but extremely powerful. This magic can only be countered by Arcane Stage Magic, other devils’ magic, or negative mana. Their appearance is exactly like “devil” suggests: they have horns, tails, sharp teeth, and any/many distorted features despite them looking like humans.

However, they cannot wander around in the human realm freely. They must meet a few perquisites for reaching the living world, like having a five-leaf grimoire and a physical body. In this blog, we’ll dive further into one of those ways, via the devil hosts.

What is a devil host?

A devil host is a human in the living realm who has a devil residing in their physical body. The person has direct access to the devil’s powers but only up to a certain percentage. It depends on how strong the body of the host is. This power allows them to use two kinds of magic, their innate magic, and the devil’s magic. Their own mana also gets powered-up with a devil to the level of being formidable.

Yet, a devil host cannot draw 100% of the devil’s powers. Only a devil existing in its own physical body or within a five-leaf grimoire can unleash its full power.

For a better understanding, take the Dark Triad‘s leader, Dante Zogratis. He is the host for the highest-ranking devil, Lucifero, and can draw 80% of the devil’s power. Like all devil hosts, Dante’s appearance also changes when he draws the devil’s powers. He sprouts horns, a tail, wings, and his body gets covered in a black substance.

The known devil hosts in Black Clover as of now are:

You’re probably wondering why Asta is not here in the list. Well, you’ll get your answers as you read ahead!!

How does being a devil host work?

To use the power of the devil, a devil host has to form a pact with it. A bargain with a devil often involves giving up parts of the human’s body, or sometimes at other conditions. Asta had to give up his right arm to use his devil’s power, for one. It is also possible to form contracts or bargains with multiple devils.

Nacht, the Vice-Captain of the Black Bulls, has four known devils residing in him. The possession of a body is generally a way devils come to the human realm. It can be a forceful possession of an existing devil (like Lucifero trying to take over Liebe’s body when the latter was a child) or by way of a contract with a human.

It must not be forgotten that being a devil host is different from the ritual of Advent of the Tree of Qliphoth. This ritual involves the three devil hosts of the Spade Kingdom, but it is much more dangerous. Once the ritual is completed, it will release actual devils in the living world as it is sort of a bridge between human and devil worlds.

Other than that, mages can also use Forbidden Magic to summon and make a formal contract with devils. The Devil-Binding ritual is simple: you summon a devil and fight to defeat it. If the mage is defeated, the devil takes over their body and can do as it pleases. But if the mage wins, it leads to the devil being chained and a formal contract formed. The mage has two options: to either establish a master-servant contract or to establish an equal contract. The former is more efficient in powering up for a Union Mode, but the latter proves to be a bit difficult. The ritual ends with similar markings appearing on the wrists of the devil and the host.

Now time to address another elephant in the room.

The following part of the article contains spoilers about Asta’s devil and also his mother. Read ahead at your own discretion!

Does Asta have a devil in him? Is Asta a Devil Host?

For starters, Asta is not a devil host. Yep, you read that right. Asta is not a host to Liebe. Liebe was sealed by Licita, the mother of Asta & foster mother of Libe, in a five-leaf grimoire. He still resides in the same grimoire, and his Anti-Magic power simply flows into Asta’s body. The Demon-Dweller sword allows Asta to use the power out of his three swords.

As Tabata-sensei has said, Asta is really just an ordinary boy. He has no magic and no devil in him. Since the devil resided in his grimoire, he could not properly draw its powers, and used only trickles of Anti-Magic.

He had to undergo the Devil-Binding Ritual to actually use full powers of the devil. In this ritual, Asta asked for an equal contract (yes, very Asta of him we know) with Liebe. Liebe also explicitly states that he wants to win the battle in the Devil-Binding ritual to take over Asta’s body. The five-leaf grimoire is also a way for devils to exist in the world, as mentioned above, and also demonstrated by Zagred’s motives in the Massacre of the Elves. Hence, Asta is not a devil host. He has formed a formal contract with his devil to lend him power.

Do you think there will be more devil hosts in the future? And will the devils be unleashed in the human world? Comment below!