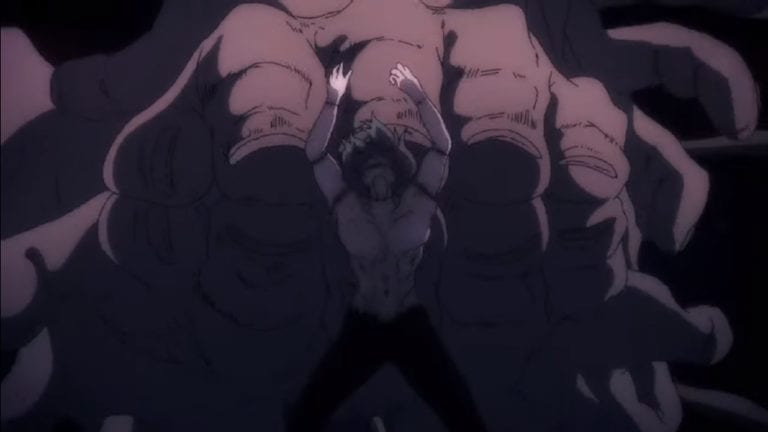 Jujutsu Kaisen episode 13 packed a punch. With the Mahito vs Nanami and Itadori fight coming to an end, the episode felt like a season finale! The episode continued the action from the last episode, as Itadori and Nanami continued to fight Mahito.

Our soul-transforming villian kept on shifting forms to attack the duo of Nanami and Itadori as they kept on fighting back consistently. He then used some of his “stockpiled” Idle Transfigured humans to try to kill Itadori; making him split up with Itadori perfectly.

This is a crucial move for Mahito, his opponent’s strategy is to utilize Nanami’s experience and technique to open a window of opportunity for Itadori to land a blow. Itadori is in a state of conflict as he tries to escape from the transfigured humans as he does not want to kill them. Even after being overwhelmed by then, he was reluctant to kill them. Just then, one of the idles said “Please, kill me”; you could feel their pain.

It was enough for Itadori to decide that he needs to put an end to all of this so that nobody else goes through this again.

Even in such a short scene, there was a small dynamic between the idles, as one of them said: “Let’s play” (implying that the idle is probably an innocent child) and the other pleading to be killed. These may seem to be small details to many but they play a crucial role in affecting the character’s decision, as Itadori did let go of the innocent idle. During this, Nanami was captured by Mahito, who believed that Itadori was a fool as could not differentiate between his ideals and what was right to do.

However, Nanami showed trust in Itadori, as he believed that Itadori was going through that process of reconciliation and that Mahito was the fool; with a smile on his face.

I’m sure you know who was right! Itadori jumps in to free Nanami, who then instantly takes an aggressive position behind Mahito and attacks while Itadori attacks from the front. With this, they’ve cornered Mahito; as he changes his shape just before the impact of an attack, however, he does not have enough time to do that now.

While being constantly pummeled by Itadori and Nanami, Mahito feels a new kind of inspirations as he experiences his first “death experience”.

This enables him to open his domain. One can say that this fight worked as a catalyst for Mahito’s growth as a curse as well. His domain, “Self Embodiment of Perfection” is connected to his innate cursed technique, which the name itself as well.

As seen in previous domains in the series, the domain user’s attack cannot miss. This means that Mahito can change the shape of the soul of anyone inside his domain. You can read more about Mahito’s powers here.

Mahito calculated his domain expansion well, as he only captured Nanami inside it. It is then revealed that Nanami cannot use the domain expansion technique, meaning that his death is inevitable.

We see a small flashback as he takes a look at his life and says “I have no regrets.”

Wait! If you thought that Nanami would die, then I’d like to tell you that you have been baited successfully! Itadori managed to break into the domain from the outside, shocking both Nanami and Mahito. However, Nanami does state that it is easier to break into a domain which traps an opponent as the outer layers of such domains are comparatively weaker.

What does this mean for Mahito?

Well, to put it simply, he is doomed. Anyone who enters his domain has their soul touched by him; meaning that Mahito touched Sukuna’s soul AGAIN. While this was completely involuntary, Sukuna couldn’t care less. He almost obliterated Mahito from existence with one blow.

In a near-death position again, Mahito is on his knees as he bleeds heavily. While Itadori was confused about this, he knows that this is his chance to kill Mahito.

He rushes towards Mahito to land the final blow, while Mahito uses all of his cursed energy to become a huge being. While swiftly approaching his opponent, Itadori calculates the flow of the cursed energy of his opponent and looks for potential counters to his attack.

He then hits Mahito with his “Divergent fist” perfectly but receives no feedback. Even before he could process what happened properly, Mahito runs for the sewers and escapes.

Mahito created a big target for Itadori to bait him in so that he could escape while the huge target acted as a decoy. Nanami contacts Ino-Kun to search for Mahito in the southeast part of sewers while he and Itadori search for him as well.

However, Itadori’s body gives up. He took quite a beating during the fight as well, as his body was left with numerous holes in it.

The episode cuts to a place where all the casualties of the incident are kept as Itadori seeks advice from Nanami.

Here, the most important part other than Itadori talking how he felt after killing a person is the fact that Nanami acknowledged Itadori as a Jujutsu Sorcerer. If you don’t remember, Nanami refused to accept Itadori as a sorcerer a few episodes prior and said that Itadori would have to prove himself.

He asked Itadori to stay alive till the time he could understand his goal properly and how to implement it. While Nanami acknowledged Itadori just now in a direct sense, he has always praised Itadori for the things he has done right while also looking out for him.

We also see Junpei’s school take measures to stop the bullying, the teachers and students alike; which was great.

Overall, this was a very strong episode. The animation was good, the fight scenes were amazing, the emphasis on the characters was great and the direction and sound in the episode were as good as it could’ve been.

The OSTs were similar to Dorohedoro, which was also animated by MAPPA.
The preview showed the Jujutsu Tech students go for the Exchange Meet Event, meaning that we’ll see a reunion soon! Did you like the episode? Comment your thoughts below!