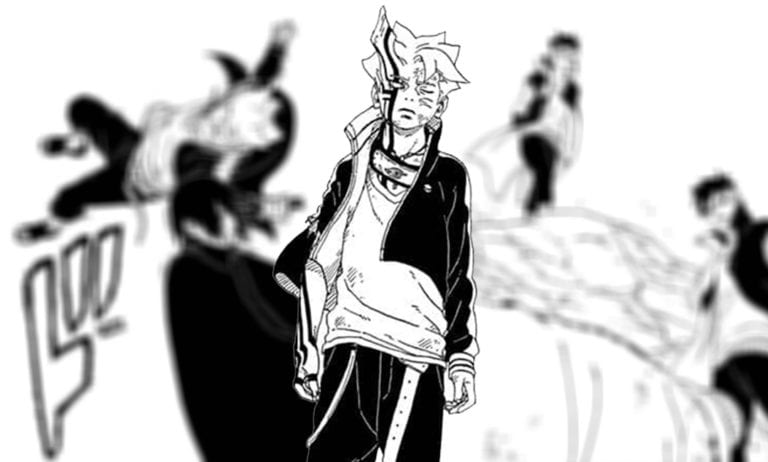 While Boruto: Naruto Next Generations chapter 53 was supposed to answer some of our questions, it raised even more! In this article, We’ll be going over the new chapter in detail and break it down, piece by piece.

The chapter starts with Kawaki being confronted by our biggest threat, Isshiki Otsutsuki. Now that Isshiki successfully managed to close the distance with Kawaki, Amado believes that the ninja world is doomed.
As Isshiki moves towards Kawaki, Naruto screams at Kawaki to run away and try to let his life run out.

As Naruto says so, Isshiki stomps him and…… poof!

Contents hide
THE BARYON MODE IS GONE???
Sasuke is all beat up, again!
Kawaki shows up to save Naruto
Isshiki fooled by a shadow clone?
The ultimate twist!

THE BARYON MODE IS GONE???

While I might be jumping the gun here, it would suck if we don’t get a proper explanation about Naruto and Kurama’s exit from the Baryon mode, which meant certain death for them. I’d still like to be positive about things and speculate that this correlates to Kurama sacrificing himself for Naruto. You can read more about it here.

As I said, it would be a major disappointment if it is just a plot armor as Kishimoto tries to fix what Kodachi did with the story. I would prefer Naruto dying over Naruto surviving due to a plot armor like scenario.

Coming back to the Isshiki situation, he is in a hurry as he barely has five minutes left and grabs Kawaki as he tries to escape.

With Kawaki captured by the throat, Sasuke instantly switches places with Kawaki using Amenotejikara, allowing him to create some distance.
As Isshiki throws Sasuke to the ground, Sasuke yells at Kawaki to throw a smoke-ball near him and escape.

Sasuke is all beat up, again!

Angered, Isshiki pummels Sasuke to the ground and says that such tricks won’t work against him as he has the byakugan. Little does he know, this smoke ball has a special mineral added in it which obstructs Claivoriyant powers! While it only lasts for a few minutes, it may be enough to halt Isshiki successfully.

Isshiki, enraged; screams for Kawaki as he flies around desperately, trying to get a hold on Kawaki. Kawaki swiftly manages to hide from his Otsutsuki predator with the help of the smoke. Left with no choice, Isshiki decides to use Kawaki’s strong bonds against him, as every heartless villain does.

He targets Naruto and stomps him, making him cough some blood. He declares that Kawaki has twenty seconds to surrender himself, or his beloved Hokage will die.

This puts Kawaki into a dilemma, as he never had a father figure except for Naruto. His original father was abusive and sold him to Jigen. Kawaki would often hide in the Kara base from Jigen out of fear, only to be found eventually and punished. After meeting Naruto, he finally felt like a person, who did not exist to fulfil someone’s needs.

As Jigen always said that there’s a hole inside Kawaki which can never be filled, our Seventh Hokage managed to fill it and give Kawaki, a vessel a purpose in life. He also said that he found Kawaki to be similar to how he once was and wants to take care of him. While these are very strong words, but they’re also coming from Naruto, a person who wears his heart on his sleeve.

Kawaki shows up to save Naruto

Both Naruto and Sasuke knew that the ninja world was doomed at this point. As Isshiki moves towards his vessel, Kawaki tries to stop him by using fire-style ninjutsu. While dealing with it wasn’t a big deal for Isshiki, it was surprising for him that Kawaki knew ninjutsu.

As he mocks Kawaki for his decision; Kawaki says that a life without Seventh is not a life for him. Isshiki then infuses him with a Karma seal and says that he will be resurrected after a long nap as his body starts to crumble.

Kawaki has progressed beautifully from being a mere vessel to a person with genuine feelings who accepts them. While he grew emotionally, he also managed to trick Isshiki! The karma seal on his hand starts to vanish, flabbergasting Isshiki. He yells and holds Kawaki as he asks for an answer and his hand crumbles away. Kawaki asks “Mr Otsutsuki, mind telling us how much longer you can cling to your existence? Seconds?”

Isshiki falls to the ground as another Kawaki emerges; he used the shadow doppelganger jutsu! WOW.

While I was a bit frustrated when I first read this, it makes perfect sense now. With the original creator of Naruto Masahi Kishimoto making his comeback as the creator of the Boruto series, it is obvious that he would live up to his name as the King of Trolls.

Isshiki fooled by a shadow clone?

The shadow doppelganger is also one of Naruto’s signature jutsus and also brings some of the technical and outsmarting aspects back from the original Naruto series (remember what Shikamaru did to Hidan?). If you’re wondering why Isshiki Otsutsuki, the greatest threat to the shinobi world not figuring out something as simple as a shadow clone is just a convenient plot armor; then I don’t blame you. However, hear me out:

Kawaki is no match for someone like Isshiki, who even Naruto could not deal with well. The only possible way for them to win is to use the time advantage they have and force Isshiki into falling for a trap.

Before Kawaki’s use of fire style, Isshiki did not know that his vessel can use ninjutsu now, namely the Shadow Clone Jutsu. Moreover, No Otsutsuki uses byakugan continuously, especially when they’re on the brink of death. On top of that, we all know how arrogant Otsutsukis are; this makes perfect sense while making the ending of the fight unpredictable and not making everything depend upon power scaling in the Boruto series.

This trick also had its fair share of risks, as Kawaki could have been easily caught if Isshiki saw through his shadow clones or if the Karma seal ended up working. Kawaki makes his way towards Naruto as he stomps through Isshiki’s degrading body and Sasuke asks Naruto about his condition.
While Naruto tries to dodge the question, both Sasuke and Kawaki pressure him into spilling the beans.

As soon as Naruto was going to speak out, Boruto stabs Sasuke in his Rinnegan eye with a kunai! Yes! You know who did it! Momoshiki Otsutsuki!

Overall, this was a great chapter. It raised many questions related to Naruto’s Baryon mode, Sasuke’s Rinnegan and Borushiki’s plan; setting us up for constant action for the next 10-20 chapters at the very least while bringing back some original Naruto series tricks.

What did you guys think about Isshiki’s defeat, Naruto’s switch out from the Baryon mode and Isshiki’s attack? Comment down below and keep visiting our site regularly as we go speculate and explore everything possible in the series in detail! You can read the latest chapters of Boruto: Naruto Next Generations Manga for free on Viz.