Skip to content
Home » Series » One Piece » One Piece: Kaido’s Devil Fruit Explains Why He Didn’t Drown!
One Piece

After waiting for what seemed like an eternity, Kaido’s devil fruit was finally revealed in chapter 999 of One Piece. Though lucky (or extremely meticulous) fans had managed to guess it right, the reveal blindsided the majority of fandom, who were expecting Kaido to be a dragon or atleast have consumed a Dragon Dragon fruit. … 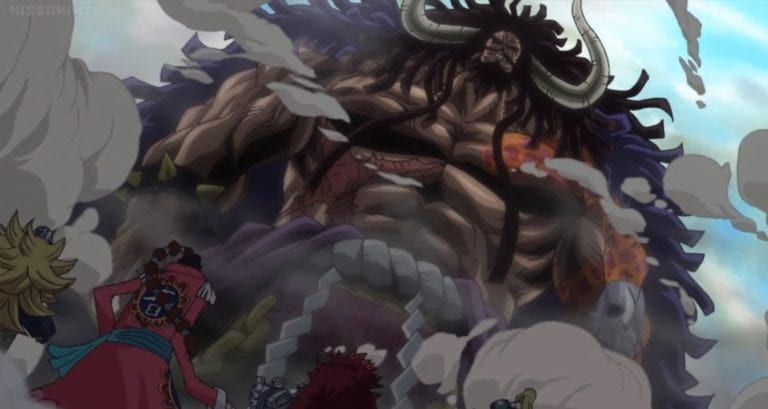 After waiting for what seemed like an eternity, Kaido’s devil fruit was finally revealed in chapter 999 of One Piece. Though lucky (or extremely meticulous) fans had managed to guess it right, the reveal blindsided the majority of fandom, who were expecting Kaido to be a dragon or atleast have consumed a Dragon Dragon fruit. But it is none. In the exchange between two yonkos in the chapter, we come to know that the Kaido has eaten the Fish Fish devil fruit, legendary model.

Kaido has taken up the hobby of attempting suicide. He is shown jumping off from a Sky Island at a height of 10,00 metres in one such attemp. His apparent inability to die made fans question why Kaido had not tried drowning himself. And if he had, how did he survive? However with the reveal of his Devil Fruit, it has become clear as to why Kaido, didn’t try drowning himself, or didn’t die while he drowned.

Contents hide
Why didn’t Kaido drown himself?
How can Kaido breathe underwater?

Why didn’t Kaido drown himself?

The biggest weakness of a devil fruit user is water. The people who have consumed devil fruits become weak and helpless when submerged in water. This makes them unable to move or swim, akin to becoming a hammer. Being unable to swim means that even the strongest devil fruit user can be killed if they are pushed in to water. So if Kaido actually wanted to kill himself, he should just have drowned right?

Well, the theory is not wrong. But there is one important thing that people should understand. The water only makes the devil fruit user unable to move or swim. It does not take away the power of the devil fruit itseld. This is visible when Luffy’s body stretches even though he sunk to the bottom on the pool in Arlong Park. However, he had to rely on external forces here (namely Nojiko) so that his body would stretch. So, a better example for this case would be former agent of Baroque Works, Mr. 3. He is shown to suvive underwater by creating a bowl of wax.

A similar theory could apply to Kaido.

It is being speculated that Kaido’s dragon form is the awakened version of the Fish Fish fruit. If that is the case, the Dragon should have retained its abilities of being able to swim and breathe underwater. If that is the case then no matter how much Kaido tries, he won’t be able to die by drowning.

How can Kaido breathe underwater?

From chapter 997, we see that Kaido has managed to lift Onigashima using his flame breath.

Now this is an ability that belongs to dragons, but since the Devil Fruit has permanently changed is body, he is able to use the flame breath even without transforming into a dragon. The same could go for his ability to breath underwater, thanks to his Fish Fish devil fruit.

So, to answer in short;

Kaido did not drown himself because the powers of his Fish Fish devil fruit would still allow him to breathe underwater. Thus he would not die and his efforts to commit suicide would be in vain.

Do you think Kaido is immortal? What could be his potential weakness? Let us know your opinions in the comments section!