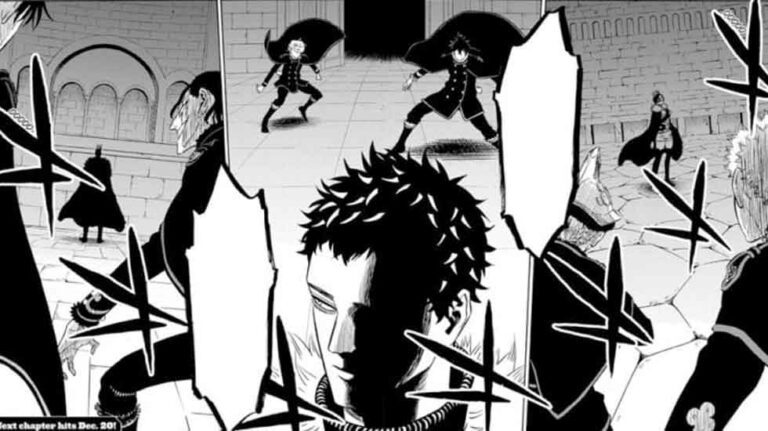 Unlike the last few chapters of the Black Clover Manga, Chapter 275 was not filled with adrenaline or new revelations, just a few points to ponder over for the next week. Well, we get it. Not all chapters can be swamped with action scenes. For the same reason, the chapter felt a bit rushed in its pace. I hope the anime takes the due course to explain everything in detail. So, let’s dive right into it!

The Ritual of Advent of the Tree of Qliphoth and Counterattack

If you were wondering how the Tree of Qliphoth will be stopped, Nacht explained it to all of us. But first let us take a look at what it works like.

The ritual is basically a large magic circle powered by four functions. At the center is one site, where the Tree will actually grow & Yami and William are kept captive. The other three sites are the Dark Triad themselves, the ones who will activate the ritual.

To stop the advent, there are three methods. One, defeat the Dark Triad so the ritual is not begun, which the group is relying upon. Two, destroy the Tree with brute force/magic, but Yami and William will die in the process. And last, well you guessed it, use Anti-Magic to nullify all magic surging into the Tree. The last way reminds me: where is Asta? Bakasta, the battle has started!

As stated above, the Magic Knights have split up into three parties with three people on each (very Clover Kingdom of them IYKWIM). All of them went straight for the Dark Triad. If they encountered any Dark Disciple on the way, one from each party stayed back as a decoy to not slow and weaken the entire operation down. So, we had these teams, with the last one being the decoy:

Charlotte, Fuegoleon, and Nozel are all Magic Squad Captains (and on top of that, two are royals, and Dorothy is a witch), so they can be trusted with handling the Dark Disciples. However, how fast they or if they even reach to support the rest of their comrades depends on how many disciples are there and how strong they are. With three decoys, we landed with the following matchups. Let’s analyze them a bit!

Jack & Nacht vs. Dante: I had expected Nacht to clash with Dante, but Jack came as a surprise. Guess he loves his best friend a lot, LOL! But I think that Jack’s Slash Magic will be beneficial to some extent with Dante’s Body Magic, allowing him to regenerate. If Jack continues his attacks, giving Dante minimal to none time to recover, and Nacht uses his Devil Powers, we can reach some sort of useful attacks. Point to note: Dante is fixated on fighting Asta, so expect him to be very angry. Also, Asta to show up, that is a given. 😛

Yuno & Langris vs. Zenon: It is payback time, Zenon! The Golden Dawn ex- and current Vice-Captain are here to make you pay in full – scratch that – probably even more for all the damage to their comrades. AND you took their Captain. Unbearable. Jokes aside, Yuno and Langris have been training together, so it will be interesting how they tackle Zenon’s own Spatial Magic. Add to that his Bone Magic (which is useful for both attack and defense), will we get to see a full Spirit Dive? Especially since Yuno also knows that the Zogratis siblings killed his real family?!

Charlotte & Rill vs. Vanica: For the host of Megicula, we have two Magic Squad Captains, both trained in the Heart Kingdom. The pulse of the fans reads the most doubts about this matchup, surprisingly. Yes, Vanica fought and won against Lolopechika, Undine, Noelle, and Secre. I agree. But only Lolopechika (and Undine?) was at Julius’s level in his prime in that fight. Y’all, please give some credit to Charlotte and Rill – they’re literally leaders of two squads! I think it is a good match to learn what both of them acquired in the Heart Kingdom’s training to learn the technique of Mana Words.

Of course these battles (nor the ones with the Dark Disciples) will be easy. And anything otherwise wouldn’t be fun either. I don’t expect for this to end any soon either, given our MC isn’t here either.

Okay enough with that. I will come to my fav girl in the Black Clover universe now!

Mereoleona was scalding this chapter (and uhm, literally) and this woman really found a way to become even more of a beast than she already was! Not that I am disappointed or anything.

Nacht had approached her, intending to let her have a worthy opportunity to get stronger (LOL). It is just as we had speculated, Mereoleona had been training all this time to achieve a new form & spell. Her Hellfire Incarnate quite literally set her body on fire of mana, and she activated her Mana Zone Full Release.

To note: her mana zone was already extremely impressive with her taking on four elves at once in the Reincarnation Arc.

She launched her improvised spell, too, the Calidos Brachium Purgatory: Abyss to put the demon back to sleep and this time forever. YOU GO, GIRL! This time too, the identity or origin of this “legend” demon has not been revealed yet. However, one thing to remember is that as things currently stand, Mereoleona is possibly the person closest to the level of Julius in his prime. Too bad she has no interest in any of this!

Again, this chapter gave us no updates on the Heart Kingdom or Elysia. I am betting on a surprise entrance by Noelle & Mimosa (at least) just like Asta from his training. The next few chapters will probably deal with the multiple fights be it decoys or the Dark Triad opponents. The dearth of Yami and the Black Bulls, in general, is really hitting me :’)

What did you think of the chapter? Read it on Viz and comment below! Until the next chapter (or episode heh), see ya!