Is Naruto Stronger Than Kaguya Ohtsutsuki? 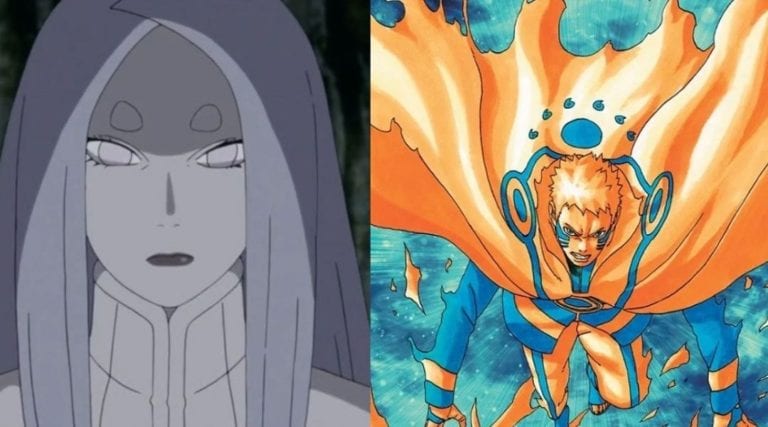 This is a question that has been running wild since the inception of Boruto: Naruto Next Generations. Is Naruto stronger than Kaguya now that he’s the Hokage? Join us as we dig deep into the series and compare Hokage Naruto, Kaguya and relevant characters.

TLDR; at his current state, especially while using the Baryon Mode, Naruto is stronger than Kaguya and will be able to defeat her in a battle!

His Uzumaki lineage and the fact that he’s the reincarnation of Asura gives him a massive life force, which might not even be comparable to other mortals in the series.

Hokage Naruto has mastered all chakra natures, Yin, Yang release and Senjutsu. On top of that, his variations of the Rasenshuriken; with the use of tailed beast chakra is quite strong. He fought Six Paths Madara and Kaguya after receiving the Six Paths Sage Mode; his strongest mode from Hagoromo Ohtsutsuki; which gave him the truthseeker orbs and a small portion of chakra from all the tailed beasts. Even though Naruto lost his truthseeker orbs while fighting Sasuke, he still has the Six Paths mode.

People have always said that Hokage Naruto is weaker than Fourth War Naruto; which is completely wrong. Remember, he had 14 years to master this mode while the Fourth War Naruto didn’t even have the time to understand his powers.

Naruto is also a taijutsu master, as seen in the Momoshiki Arc, he and Sasuke fought a lot of the fight relying on taijutsu, as ninjutsu would not work on Momoshiki. We also saw the power of the massive Rasengan shown at the end of the arc, which Naruto can spam casually.

This list doesn’t stop, still. He is essentially like a modded character in GTA, capable of casually dealing unimaginable level of damage.

His complete Kyuubi mode, chakra transfer and the all-new Baryon mode boost him even more. Oh, wait! I almost forgot the Jutsu which played a crucial role in defeating Kaguya: the Reverse Harem Jutsu.

No matter how bad of a villain she might be, she is extremely powerful. Her base chakra is said to be higher than Ten-tails Madara and is immortal (she does not age).

Let’s dig deeper into Kaguya’s strength by understanding all the aspects:

Kaguya’s visual prowess is one of the major keys to her insane strength, with a pair of byakugan which are leagues above the Hyuga Clan’s best, which not only provide her with the standard benefits like near 360 vision and x-ray vision but also highlight chakra types and natures.

Being one of the strongest wielders of the Rinne-Sharingan, her abilities are monstrous. The dojutsu is located at the centre of her forehead, red in colour and has 9 tomoes; representing the nine tailed-beasts. The Rinne-Sharingan also enables Kaguya to cast the Infinite Tsukiyomi, have a heightened sense of perception and use the “Dimensional shifting” technique.

The ability mentioned above allows the goddess to transfer herself and others in a range to another dimension and erase all the presence of their chakra in the specific location.

The goddess can also use Space-time Ninjutsu, allowing to her teleport instantaneously at will; like Obito Uchiha. Her dojutsu also provides the ability to dodge/counter attacks from multiple directions at an unparalleled level in battle.

The Shikotsumyaku is a Kekkei Genkai which allows its wielder to manipulate and extend their bone structure of their body. This ability was also seen in Kimmimaro; however, Kaguya’s “All Killing Ash Bones” ability is outright unstoppable, turning whatever it touches into ash on a molecular level. It can be shot as a projectile or used to impale a target directly.

While Kaguya may not seem like an outstanding physical fighter, she does have some unique abilities, like halting an enemy and absorbing their chakra during physical contact.

In the anime, just a simple release of her chakra could create massive shock-waves capable of subduing Hamura.

On top of that, She has a lot of physical bulk and speed, taking no serious damage from a Rasen Shuriken barrage, dodging a Rinne-Sharingan Sasuke’s chidori and can also use her hair as a weapon to capture someone to drain their chakra or to sweep them through the dimension.

The Goddess can also absorb ninjutsu, use the Ying, Yang and Ying-Yang release, all five chakra natures and regenerate her limbs at will; which her massive chakra reserves compliment.

The massive truth-seeker orbs combined with all five changes in chakra nature and the Yin and Yang release can destroy a planet while also reshaping it according to her will. Yeah…THAT. It is also said that these orbs have no limit to their expansion.

How strong is Kaguya compared to others in Boruto?

Because of the goddess’ overwhelming abilities, it is quite common in the community for people to scale Kaguya above other Othtsutsukis like Momoshiki. However, Kaguya herself was so scared of base Momoshiki that she planned on making a Zetsu army for the time he arrived.

If this is not enough to make you believe, Momoshiki made his appearance in Boruto: Naruto Next Generations, as someone who had arrived to clean up Kaguya’s work, meaning his strength is at least relative to Kaguya’s.

Sasuke also said that Momoshiki is a bigger threat than Kaguya and while most people just call it an assumption, we should remember that he has roamed around the planet, hunting for anything Ohtsutsuki and already knew their names; meaning that he is prepared to fight an Otsutsuki during his journey, at all times.

It can be assumed that Momoshiki underestimated Naruto and Sasuke quite a bit, as we saw what his karma seal can do in the Boru-Shiki vs Boro fight, which was only a part of his real power.

Another thing to note is how heavily underestimated Hokage Naruto and Sasuke, they had 15 years to master the Six Paths Mode and the Rinnegan; while the 4th war duo had received their powers recently. A good example would be Naruto’s fight with Toneri Ohtsutsuki, a direct descendant of Hamura and has the visual prowess of uncountable byakugan and his Tenseingan.

His chakra levels were stated to be similar to Kaguya’s; with abilities like being able to control people and move the moon.

During his fight with Naruto, one of his attacks sliced the moon in half, which Naruto tanked easily and proceeded to OHKO him. Naruto was 19 years old then; we can only assume how strong he has become now.

Baryon mode could be Naruto’s biggest asset against a Kaguya-level threat or bigger; as not only does it allow him to reduce his opponent’s lifespan, he also gains otherworldly abilities.

He caught Isshiki Otsutsuki’s Chakra Rods and broke them with ease and proceeded to dominate the fight, reducing his lifespan to mere few minutes! These are very similar to the chakra needles that Kaguya used.

This is crucial as Isshiki is stated to be Kaguya’s original partner, who is leagues above Kaguya.

Naruto can handle Kaguya-level threats with ease, especially considering his recent performances against Toneri, Momoshiki and Isshiki Ohtsutsuki. His training for the past fourteen years or so has clearly paid off and has established himself as arguably the strongest and the greatest ninja to have ever lived.

What do you think? Did you miss some of these points before or have any other thoughts? Let us know in the comments below and read Boruto: Naruto Next Generations for free on Viz!

2 thoughts on “Is Naruto Stronger Than Kaguya Ohtsutsuki?”