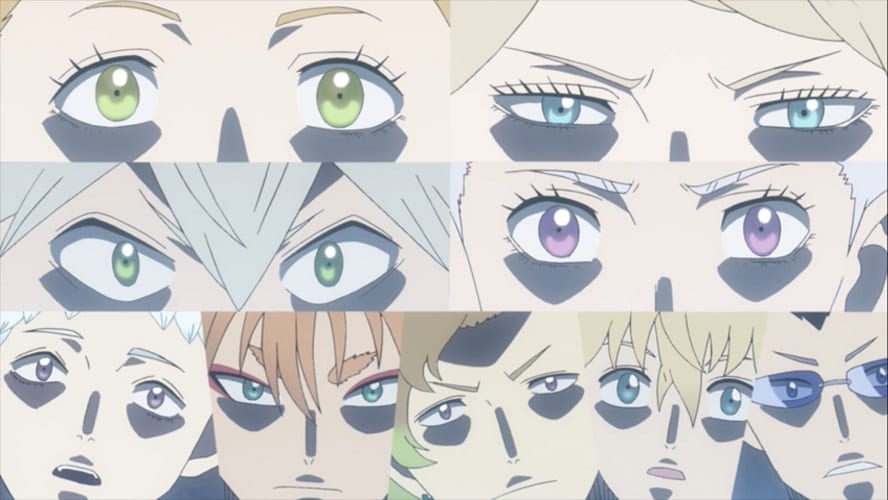 It has begun! The much-awaited Training Arc of the anime adaptation of Yuki Tabata’s Black Clover is here. The anime kickstarted the new arc with a fun-filled and informative Black Clover Episode 155. It opens up with the Black Bulls all ready to leave for the Heart Kingdom. They recount their reasons and promises for training; Finral to woo Finess & lead the House Vuade, Noelle to avenge her mother, Luck & Magna to surpass each other, and Asta to well….train, as usual.

Before we proceed, the animation of episode 155 was a bit off, the characters’ faces visibly distorted. Pierrot has maintained its stance of not allocating enough budget to ensure smooth animation in the non-action episodes. It’s especially noticeable now that we have had some amazing animes this season. Anyway, let’s begin!

The Black Bulls unite with the members from other squads chosen for training in the Heart Kingdom (Episode 153). Yuno passed his message to Asta via Mimosa that he will get stronger in Golden Dawn. The Magic Knights move to meet Lolopechika who has a new pet: Charmy! Our cute food connoisseur did sneak in after all! Will her wolf in sheep’s clothing power come through while she is in the Heart Kingdom? I am hoping so, la!

Meeting the Spirit Guardians and assignments

Gadjah pensively states that the Spade Kingdom has taken over most of the Diamond Kingdom, and the next targets can be the Heart or Clover Kingdom anytime. This means that all of them have to become stronger as fast as possible – meaning the training will be brutal.

He then introduces the other Spirit Guardians of the Heart Kingdom, who are nearly as strong as the Wizard King of the Clover Kingdom. They are the most powerful mages who use “mana words”, a technique of the Heart Kingdom, to borrow mana from nature. This amplifies their innate mana and generates a powerful spell.

Aside from Gadjah who is the Spirit Guardian of lightning, we also come to know about Sarado, Potrof, Floga, and Smurik. They are the Spirit Guardians of earth, plants, fire, and wind respectively. Each of them have different personalities and training methods. They are assigned the Clover Kingdom’s Magic Knights in the following manner:

The current assignments of the Magic Knights are temporary. They will keep rotating once they grow from learning from one Spirit Guardian.

You might be wondering where Asta is. Well, he was wondering that too. Since he doesn’t have any mana but his anti-magic powers can be key to defeating Megicula, Gadjah will first assess his skills by having a duel with him! We already know our boy is nowhere close to any Spirit Guardians yet, but he is gonna akiramenai no ga ore no mahoda this, as usual. 😛

For the others, training begins in the meanwhile!

While all the Spirit Guardians are taking different stances on learning, their objective is the same: growth. The first step for all the Knights is to understand natural mana and learn the technique of mana words. When incantations are woven into a spell, they turn the spell more powerful. This will be a huge boost to the Clover Kingdom’s attacks and defenses in the upcoming battle.

Sarado told Charlotte & Mimosa to understand the earth, Floga recognized Leopold’s potential, Potrof commended Rill & Charmy as geniuses, Smurik forced Finral to rethink his role as a supporter to his comrades, and Gadjah criticized Magna. Magna walked off, probably to train on his own (I hope he gets a power-up, he is trying so hard)! Rill and Charmy are too engaged in their interests to train and are giving poor Potrof a hard time, LOL.

Surprisingly (or not really) Lolopechika took upon herself (and Undine) to train Noelle and Secre. When the others left, she also pleaded them to “save her” from dying of the curse. She knows how the host of Megicula, Vanica, fights. While she and Undine aren’t powerful enough to beat Vanica, with the help of Noelle and Secre they can do it. Both the Black Bulls members agree, as expected.

All of the Magic Knights are slowly learning from “working to their bones” like Finral said. Yami-san is satisfied with the training report, and he’s on his way to surpass his own limits in a strong magic region too! Yami is going to turn out as the GOAT, isn’t he?

Black Clover Is Coming To An End

The duel between Asta and Gadjah has started too! It will probably end up in Asta getting rekt (like all the attempts he made) next week. But I am also sure that he will come up with something weird and creative to impress Gadjah, other than just akiramenai madou. Let’s hope so, at least! I am also curious about how the other squads and the captains are training in the Clover Kingdom. It will also explain why Yuno refused to go to the Heart Kingdom.

Black Clover Episode 155 was a great introduction to the Training Arc! The animation was surely a bit off, but we can expect smoother animation for the action scenes ahead. The episode has raised expectations for the post-training powers and spells of the characters. Can’t wait to see them beat some bad guys up, can we?!

Did you like the episode? Let me know in the comments!