One Piece Episode 953 Review: An Epic Clash & A Sweet Reunion 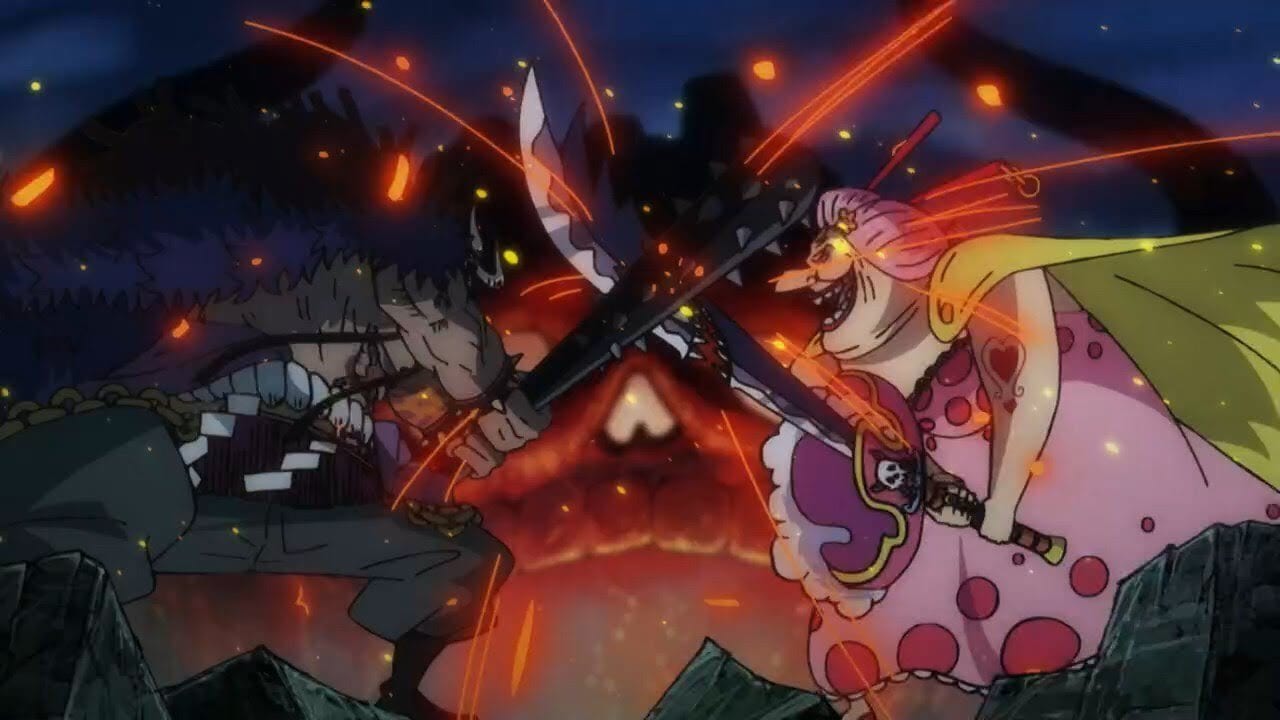 In the previous episode, Kawamatsu interrupts Zoro and Gyukimaru’s fight and Big Mom and Kaido start battling. In episode 953, Toei outdid themselves. Many can argue that the anime is better than the manga at this point. This episode was pretty hyped and emotional. So, let’s get down to what happened!

The extended fight between Kaido and Big Mom was animated very well. Even if the scene was pretty short, seeing them battle was amazing! Big Mom’s strength is unrivalled, but Kaido is able to hold up against her, even sending one of her attacks back at her. Their clash is shaking up the island. Also, Queen basically trying to run away was really funny. He was planning to come to Udon to help. The call with Babanuki will make Kaido think that the situation in Udon is all taken care of, unfortunately for Queen.

O-Tama using her Devil Fruit to tame the Beasts will be pretty helpful for the coming war, despite her timid nature. Her interactions with the Beasts are extremely cute. Caribou praises himself for what he has done. Meanwhile, Luffy has an encounter with the former District Bosses.

They were initially shown as shadowy figures. They seemed very suspicious of Luffy, attacking him before Hyogoro stops them. Their banter makes for a pretty hilarious scene. The Bosses then head out to gather the remaining Rebels. Finally, the prisoner’s awe for Luffy reminds me of what happened with Buggy at Impel Down.

Kin’emon has gotten his hands on the map to Kaido’s castle, thanks to Ashura Doji. Raizo calls to inform Kin’emon and the others about everything that happened, about Luffy and Kawamatsu. He also mentions that fact that they now have three thousand five hundred allies and expecting more. The problem is getting weapons. Raizo then tells them about the weapons factories of Wano. They contain products of war that will get shipped outside of the country. So, Kin’emon and the gang head to Amigasa Village to gauge the situation.

Kawamatsu and Hiyori finally have their reunion. She apologises to him profusely. The flashback was very emotional. Hiyori, with her kind heart, running away for Kawamatsu’s sake. Kawamatsu desperately searching for her. Him getting weaker, but still pushing through.

The episode ends with Gyukimaru getting shot, with magnum to paralyse him, by the Beasts Pirates. Kawamatsu and Zoro, synchronised, attack them. Gyukimaru is glad that Kawamatsu is alive. He gets up and runs. Zoro, still after the Shusui, chases after him.

The plot of this episode was a little all over the place. The pacing was still good, but it ended too soon. The animation, as always was awesome, especially during Kaido and Big Mom’s fight. The music was great as well. Nothing much of importance happened this episode, yet it was a feel-good and funny one.

In the next episode, Kawamatsu will be informed of Enma, Oden’s greatest sword. It was able to cut even Kaido. What do you think about the episode? Please let us know down in the comments below!

I'm a huge weeaboo and I'm proud of it! I enjoy most anime from slice of life to horror. I love writing and take inspiration from anime because, face it, they have some incredible plots out there.