Skip to content
Home » Series » Boruto » Is Naruto Dead In Boruto? Will He Die?

Is Naruto Dead In Boruto? Will He Die? 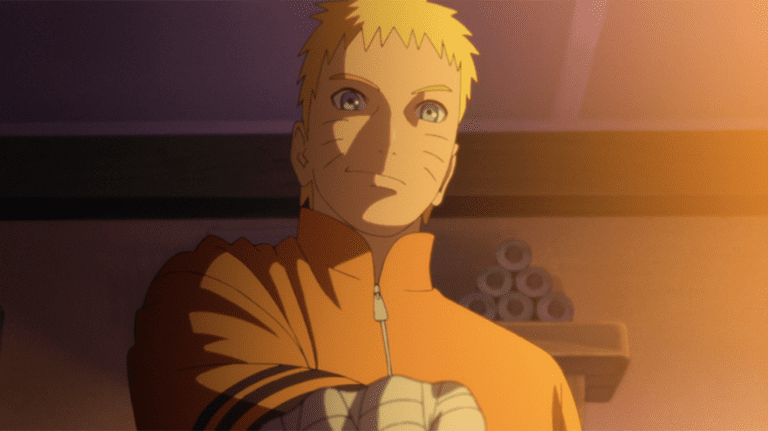 Since the inception of the Boruto manga, rumours about Naruto’s death or being sealed have been running wild. While Masashi Kishimoto, the author of Naruto did say that he doesn’t mind killing off main characters like Naruto and Sasuke in the Boruto series if needed, it would come as a huge shock to the fans of the series who have been ardently following the characters journey for over a decade.

There have been a few critical points in the story so far where everybody thought that this might be it for our beloved knucklehead ninja. However, Naruto pulled through! But, the question still remains; will Naruto die eventually?

Through this article, we intend to answer your question in detail. To do so, we need to understand why Naruto’s death is a possibility in the first place. Before that, let’s answer the question that is bugging you;

Is Naruto dead in Boruto? Well, short answer; No, Naruto is not dead in Boruto, not yet. He however has lost Kurama and is weakened as far as the current scenario is concerned. Now let’s go one to address the other stuff.

Contents hide
Why Naruto Could Die:
Why Naruto’s death could be essential for Boruto:
Current Scenario:
How Will Naruto Die?
Final Thoughts:

Why Naruto Could Die:

Now there are many who say it is impossible to kill Naruto; or that killing Naruto would be a foolish plot twist. That is a wrong assumption to make. The whole series is about Boruto and his development as a shinobi (though he is already quite a formidable one). So Naruto is nothing other than a plot tool in the hands of the Mangaka.

Masashi Kishimoto said this when asked about the possibility of Naruto dying the series, “I think it’s okay if it [Boruto] isn’t really bound to Naruto. The time period is different and because various original elements are mixed in with the setting…I think I’d like it done with freedom.”

Boruto can only take the center stage, if the current strongest shinobi and saviour of the village, which of course is Naruto, steps down ( which could also mean that he would die). While this is heartbreaking, it also seems like a real possibility. Furthermore, passing the will of fire was a recurring theme in the Naruto series; with the passing of characters like Jiraiya, Shikaku, Hiruzen Sarutobi, Minato, Kushina, Hashirama, etc. Let’s dwell deeper into the topic and understand why Naruto’s death could be important to the story.

Why Naruto’s death could be essential for Boruto:

Remember Jiraiya? Jiraiya’s death was a major plot point in Naruto: Shippuden. It played a huge role in Naruto’s character development and the ensuing Pain Arc; which was one of the best arcs in the series. It is possible that Naruto’s death would have a similar impact on Boruto. It may transform him from a carefree brat to a strong teenager; taking on Kawaki in the flashforward scene shown at the start. And, this could also be the reason why Kawaki changes.

We’ve analysed Kawaki’s character and Naruto’s influence on him. As you may expect, Nanadaime’s death will be a major turning point in his life as well.

In the post-timeskip scene, Kawaki tells Boruto, he will send him where he sent Lord Seventh. Now, this dialogue has been interpreted in multiple ways by fans. One deduction is that Kawaki is talking about sending Boruto to another dimension, where Naruto is currently being held. We’ll discuss this possibility in detail someday.

The second deduction is that Kawaki, who wants to end the age of shinobi is implying that he will kill Boruto; just like he killed Naruto. There are many who support this assumption because this type of threat seems more logical in the situation. It is possible that Naruto sacrificed his life to save Boruto, but then we are only making wild guesses here.

While Boruto, Kawaki, Mitsuki and Sarada were working together in Chapter 40 to get back Naruto from the other dimension by fending off a Kara member; a chain of events does lead Kawaki to change sides and turn on Boruto and Konoha. We don’t know what those events might be. However, it could also be possible that the seventh Hokage loses his life in that chain of events.

Again, these are mere speculations. It is possible that Kawaki is trying to do something “righteous”, and there’s no “bad” person. We speculate this because some Boruto openings seem to symbolise Kawaki as the new Naruto and Boruto as the new Sasuke. When we say “new”, we’re not saying that they’re going to be the older generation’s copies. They could simply be people who inherit their Will of Fire. The manga also has moments that build this speculation more; like Kurama stating that Kawaki is the same as young Naruto and Boruto’s desire to become like his master Sasuke.

Still, there is still time (Boruto seems to be between 16-18 years old) when he is facing Kawaki; so it is safe to say that a lot is yet to happen in this time period. So, let’s speculate using what is happening right now in the manga!

As of Chapter 60 of the Boruto manga, Code and Eida have formed a Joint Venture to end the shinobis. Code is quite formidable already, and if he manages to get rid of his limiters; then he’d be a major threat. Amado is confident that Code’s strength without the limiters would surpass that of Jigen’s.

Let’s talk about Eida now. We think that she’s a bigger threat than Code, especially because of her main ability to control people. She also has a few hidden abilities, hence there’s still a lot about her that we are oblivious of. Their Joint Venture’s actions will be essential to the story in the long term. But, we can’t say how and when with certainty.

But, let’s assume that Naruto’s does die in Boruto; either by this Joint Venture or someone else for the sake of discussion.

How Will Naruto Die?

Considering the current scenario, there’s a possibility that Naruto could die/be sealed due to Code and Eida’s actions. While it is impossible to see Kawaki simply sway towards Eida and go against his now father Naruto; there’s a chance that the Join Venture might force Kawaki to do so.

Since Kawaki said that he’d send Boruto to the same place as Naruto post time skip, we know that there’s some conflict between Kawaki and Boruto. As to how this conflict arises, we have no idea. We might be a little too early into the story to speculate what can happen. But, we’ve nothing to lose! I think that they’re going to force both Boruto and Kawaki to choose different paths, but the destination would be the same. It could be peace, protecting their family, or anything else. This would be similar to Naruto and Sasuke’s story, as they chose different paths but had the same/similar goals.

However, there’s a good chance that the reason for the conflict would be something completely different. Boruto and Kawaki have spent lives at the extreme ends of the spectrum; one who had pretty much everything and one who knew nothing but suffering. Furthermore, Naruto and Sasuke broke the cycle of fate, so we know that we won’t be seeing an Indra-Asura cycle rerun.

Nonetheless, Naruto’s death will be of great importance to both the Boruto series and the anime fandom alike. Naruto is one of the most iconic animanga characters in history and anything related to him which is even a tad bit clumsy or sloppy will always cause an uproar.

We think that Naruto’s death/sealing is necessary; it’s just a matter of time. The author stated that he wants every death in the series to be meaningful. Hence, we can expect a really strong and emotional scene somewhere in the future. We don’t have a clear idea about how Naruto will die, but we have grasped a decent idea of why it will happen.

While we’re not against the idea as long as it’s executed well and affects the story positively, what are your thoughts? Do you think that Naruto will die? Yes? No? Why? Let us know in the comments below!