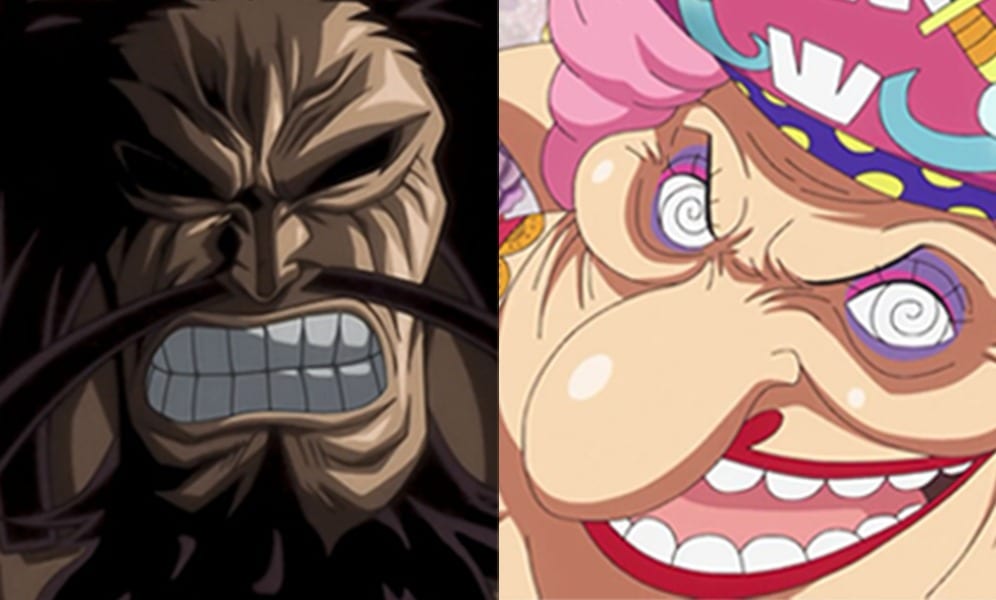 Big Mom is a wild-card in the Onigashima raid. It is true that she agreed to be a part of Kaido’s “New Onigashima” project and entered into an alliance with the Beast Pirates. However, we know Big Mom is one of the most selfish and cruel people around in the world of One Piece. While this is partly due to the fault of Carmel and Streusen, the fact remains that she is not the best person to have as an ally in your “I shall dominate the world” plans.

And hence the question of how trustworthy Charlotte Linlin is, begs to be answered. Will she betray Kaido eventually? Or will the two join hands to be one of the formidable pirate alliances in the New World?

The speculations about Big Mom betraying Kaido are not entirely baseless. In the past she betrayed the Vinsmoke family in the name of an alliance. There’s nothing that says she won’t do it once again.

Her dialogue, certainly points to the fact that she has something nasty or sinister planned (probably).

Then, in chapter 996, instead of fighting Marco and the others, she hurries to the top where Kaido is facing off with the Red Scabbards. The expression on her face and the manner in which she left everything else to focus solely on Kaido, makes us believe that she is upto no good.

She had previously stated that she doesn’t have the soul weapons for fighting Marco and the others. Was she saving them for the eventual fight with Kaido? But then, does Big Mom have any concrete reasons to betray Kaido?

Apparently, Kaido owes Big Mom a huge favor. This is something that he has accepted time and again. Also, having a formidable yonko as an ally is something that only benefits Big Mom. If she ends up in a tight spot, she can count on making use of this favor that Kaido owes her. With the world of One Piece falling into chaos, it is better to have an ally, than to navigate the rough tides alone.

That said, the goals of Big Mom and Kaido don’t really align.

Why would Big Mom think of betraying Kaido?

When they announced the New Onigashima project, Kaido and Big Mom stated that they wanted to get hold of the ancient weapons and the One Piece. They intend to strike when the World Government has its hands full and take control of the World. Kaido wants a big war. Big Mom wants peace. Wait! What?

If you remember, Big Mom had stated back in WCI to Caesar Clown that she wanted to live without a worry in the World. Keeping her selfish attitude and gluttony in mind, this could literally mean that she wanted everything for herself. The alliance with Kaido meant sharing things with him. Which includes the road Ponegyph, the intel on Raftel (laugh tale) she may have and even Charlotte Pudding. Would she be willing to do so?

One very obvious reason for Big Mom to deceive Kaido would be to obtain the Road Poneglyph in Wano. Also, destroying the Straw Hats is also one of her primary goals. She may fake the alliance with Kaido till she achieves these two purposes. Maybe then she’d take down the Yonko, to go on and become the Pirate King.

But if that’s the case, why would she be heading to the top of the dome now? To assist Kaido? And if that is the case, there is no chance that Luffy and co. will be able to hold out on their own against these two. This would also sweetly fit in with the Revolutionaries coming to Wano theory that we had proposed earlier.

So in short, Big Mom would betray Kaido after the Straw Hats are defeated, and she gets her hand on the Road Poneglyph. If she is hell-bent on betraying that is. Otherwise, these two could end up having a formidable alliance, enough to make the world tremble.

What are your thoughts on the chances on Big Mom betraying Kaido? Let us know them in the comments section!