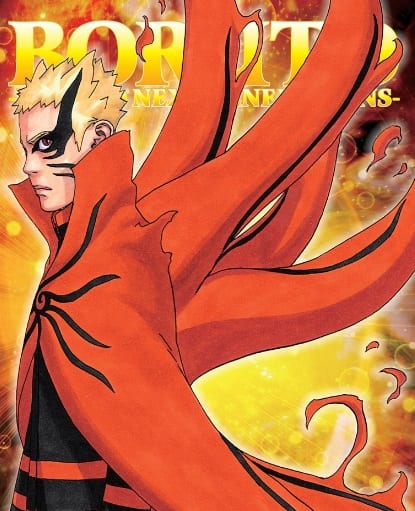 Boruto Chapter 52 has brought a lot to the table and the all-new and mighty Baryon mode is a big part of it. Let me say this, it’s more hype than Might Guy’s 8 Gates. Naruto’s new mode, the “Baryon” mode is a double-edged sword. While it gives immense strength to Naruto, it sucks off his and Kurama’s chakra (and life force!).

As Kurama explains, the Baryon Mode is a transformation that is similar to Nuclear fusion. It is named after Baryon, a complex sub-atomic particle. In this mode, Naruto and Kurama’s chakra are merged, aking to a fusion reaction, to produce a completely new form of energy.

Contents hide
Wait, then is it any different from the Kurama or Sage of Six Paths Mode?
Will Naruto die?

Wait, then is it any different from the Kurama or Sage of Six Paths Mode?

Yes! The other two modes would use chakra from the surrounding before and now, Naruto will use his and Kyuubi’s chakra as the raw ingredient for this immense power and the power isn’t even chakra! It’s just energy! It can be sustained till one, or both of them die.

Naruto gains insane strength from this mode; he easily caught the chakra rods Sasuke couldn’t even see with his Sharingan. He could even stop those sensory cubes with ease, or so it looks.

This mode sounds overpowered because it kind of is, kind of isn’t. While he could overpower Isshiki, Naruto cannot sustain this mode at all, five minutes into this mode and he was down a knee. As our cunning fox, Kurama said, the mode’s efficiency decreases from even thinking! The chakra absorption rate of this mode is extremely unforgiving and could be catastrophic. On top of this, he was constantly sending chakra to Kawaki, to keep his prosthetic arm working. Such a Naruto thing to do.

We can see how serious the situation is, as our seemingly overpowered Villain says “I don’t care for that look in your eyes.”

Due to this, the Baryon mode is a life-shortening sacrificial gamble, as Isshiki said. Our duo here cannot hope to defeat their strongest opponent through brute strength and hence, their only hope is to use the most important ability of this power-up: Its ability to reduce someone’s life span when Naruto comes in physical contact with them. This ability is terrifying, as our messiah managed to decrease Isshiki’s life span from 23 hours to just 10 minutes! In one chapter!

Since we don’t have more details about this mode, this crazy power-up might even be considered as a plot armour. But we’ll take it anyways.

With this out of the way, let’s address the elephant in the room;

We don’t know, we really don’t. While it is possible that Naruto might die maybe Naruto could revert to his normal form, which is unlikely. However, let me set this straight, I am completely fine with Naruto dying like this; this will be a hero’s death.

The whole symbolism of Naruto’s form becoming more read from golden and Kurama’s direct comparison of this mode to the sun clearly shows that Naruto is a “red giant” right now; i.e. he’s emitting a lot of energy and will die off after he expends all of it, just like how a sun does. Hagoromo gave naruto the Yang seal, which is regarded as sunlight.

On top of that Naruto has always been a bright person, someone who has been compared to the sun and light before multiple times in the series and he guided the shinobi world to new light, which is peace. Naruto dying while protecting the shinobi world in such a glorious fashion is all that we could ask for; its something Naruto will be proud of.

Can Naruto Beat Hashirama Without Kurama? (2021)

How Strong Is Naruto In Boruto Without Kurama? (2021)

It’s still too early to make a call as we also saw Kawaki being teleported into the dimension from Konoha and Momoshiki taking control of Boruto, which means that there’s going be a huge twist and interference in the next chapter. Sasuke again turned out to be an onlooker in the latest chapter. But with the situation getting more intense, he might play an important role in the coming chapters.

Boruto Chapter 52 marked Kishimoto’s return to the Naruto franchise. While the story is still continuing in Ukyo Kodachi’s vein, Kishimoto’s style might become more visible in the future as we’re coming closer to the real climax of this arc, the final showdown between Boruto and Kawaki. It will be interesting to see how Kawaki ends up fighting Boruto and what happens to our beloved characters as well. I expect Kishimoto to go back to his roots and bring out the best quality of writing we’ve seen from him.

What do you guys think of this mode? Do you believe that Naruto will survive? Well, all that’s left to do is cross your fingers, wait for December 20 and pray to god that Kishimoto-sensei doesn’t deliver Naruto with the “necessary for character development fate”!

You can read the latest chapter of Boruto: Naruto Next Generations on Viz.com or the Shonen Jump app.

Did Boruto Reveal The Connection Between Jougan & The Otsutsuki God?

Boruto: Is Kawaki An Otsutsuki Now?