Skip to content
Home » Series » One Piece » One Piece: Why Was Sanji Shocked At The End Of Chapter 996?
One Piece

One Piece: Why Was Sanji Shocked At The End Of Chapter 996? 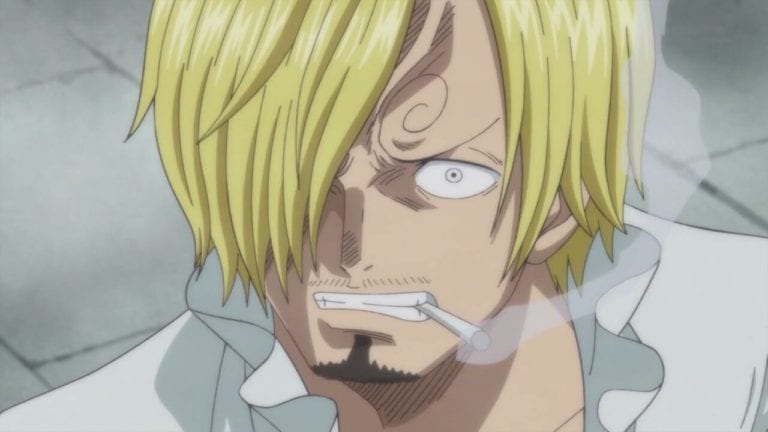 The following article contains spoilers from chapter 996 of the manga, read ahead at your own discretion. You can read the latest chapter for free on Viz.com or the Manga Plus app.

In One Piece chapter 996 Sanji, along with Jinbei, was helping Luffy to go up the tower to join up with Kinemon and the others to fight Kaido. They were on their way to the third floor when a peculiar sound caught his attention. Sanji uses his Observation Haki to better understand what it is. That’s when he hears a familiar song (?), which sent a jolt of electricity throughout his body (well, not literally).

Electrifying, here, refers to either excitement or shock. Sanji would only be super duper excited if he sees a horde of beautiful ladies. This is partly why some fans believe the person up on the third floor could be Black Maria with her ladies. The Tobiroppo member could be laying a seductive trap for Luffy and co. to prevent them from going up. But if Sanji’s expression is taken as shock (laced with trauma), then the situation could be totally different.

Edit: This article has been updated based on the official translation of Chapter 996!

When the raw scans and spoilers of One Piece Chapter 996 came out, fans widely speculated that the person in question here is Emporio Ivankov. This was due to faulty translations in the chapter. The style of laugh (“Nfufufufuf”) and the lyrics of the song along with the way it’s styled (especially the “just kidding”/ “what’s that”) was translated in a way that it pointed to Ivankov

Also, at the start of the chapter, we see O-Tama saying she came to Wano on an enemy ship. While this could mostly refer to Babanuki’s ship from Udon prison in Wano, fans assumed that this could also be the Revolutionary Army’s ship. Wait! Did you say Revolutionary Army?

This theory was debunked as soon as the official translations of the chapter came out on Viz and Manga plus app. The style of laugh was particularly different (Kweh heh heh), and the dialogues that we see is a prominent sentence which is used by women in Japan when their kimonos are being removed or they are being undressed. While the contradictory tone (oxymoron-ish) in the song still makes some incline towards Ivankov, there are stark differences here.

Also, there weren’t any particularly telling reasons for Ivankov or the revolutionary army to make landfall on Wano. And even if they did arrive on Wano (or Onigashima in particular) how did they manage to sneak into Kaido’s Tower without being spotted by anyone.

Another possibility that comes to mind is that this could be some other Okama from the Kamabakka kingdom. They might be using Ivankov’s catchphrase lines for some reason (admiration?). Sanji would still recognize that peculiar style of singing due to the two stressful years that he spent on the Kamabakka kingdom.

If the expression on Sanji’s face is taken as stark excitement on hearing a woman’s sweet seductive voice, then it could be Black Maria singing that song. And since the song is something that a woman would sing/recite while being undressed, Sanji’s expression is on point. This has made fans side with Black Maria to be the person in question. She is one candidate who is already there in the tower and is a singer. Black Maria also runs a pleasure house meaning, she would be familiar with such plays that would catch the attention of men.

The downside is that the style of singing (compared to that in chapter 992) is vastly different. Black Maria styles herself as a geisha, and from what Sanji inferred, the style of the song or the singing is not very reserved geisha like.

There are some fans who are also speculating that Black Maria could be a Revolutionary Army spy and a secret Okama sympathiser who has been planted on Wano. She could be showing here true colors now that the battle is in motion.

The chances of the person singing the song being Queen is outright rejected by many of the fans. But there is still a slight possibility that it could be Queen. In the previous chapter, the All-Star did prioritize taking out Zoro and Sanji in order to bring down the Straw Hats. And he somehow seemed to be familiar with Sanji’s father on a first name basis.

However, considering that the song is something that a girl would sing, the person in question being Queen seems very unlikely. Queen was last seen on the performance floor and he is busy with the Ice Oni virus fiasco there. He possibly won’t leave everything behind and come to the third floor just to take out Sanji, that seems like a long shot.

Yes, yes, we all saw Kaido chopping off his head. He is dead. Or is he? After seeing the term “My Lord” in the official translations, there are fans who fear that Orochi could very well be alive and the perosn that Kaido killed was someone that Kanjuro drew (too far fetched?)

If not Orochi, it could be Fukurokuju (who was the leader of Orochi Oniwabanshu). We see him slip away from the fight silently in Chapter 990. What if he was too bored to fight and went to get himself some girls?

If that is the case, one of these two must be behaving inappropriately with a woman (or a geisha or a pleasure house woman) which elicited such a reaction from Sanji.

While these three are the top candidates for the identity of the person who sent Sanji into a shock, there are others who think this person could be one of King (who is known to be a pervert apparently), Bon Clay (last seen on Impel down) or someone new entirely. Well, for now, our bet would either be on a random Okama or Black Maria (who has the best possible chances of being on the third floor of the castle).

What are your opinions on why Sanji got shocked at the end of Chapter 996? Let us know in the comments section below!