How SMILE Fruit Brought Tragedy To Ebisu Town In Wano 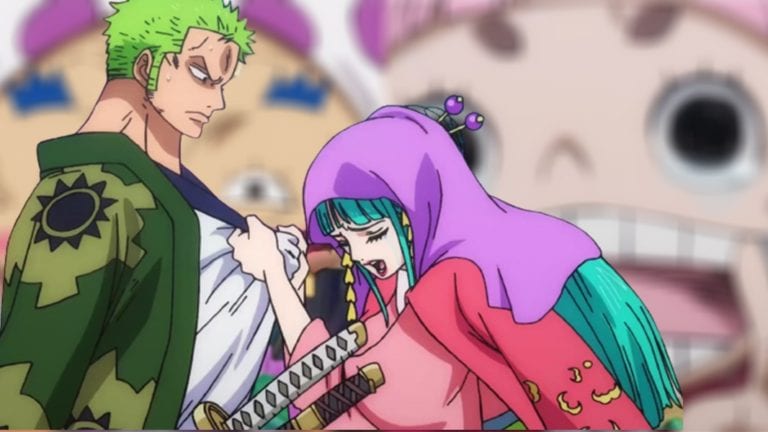 Ebisu Town, also known as the leftovers town, is a city located to the east of the Flower Capital in Wano. But in stark contrast to its name, Ebisu is a beatdown place, spotted with shanty log-houses sheltering extremely poor residents. But despite their tough conditions, the residents of this town always kept on smiling.

This merry attitude and spirit of positivity, which is similar to Ebisu, one of the Seven Gods of Fortune, is what gives the town its name.

The mirthful spirit does not change even during the hardest or the most inappropriate times, which bewildered onlookers. When Yasuibe (Tonoyasu) was executed in the Flower Capital by Shogun Orochi, the residents of Ebisu still continued to laugh and smile. They were not looking down on Tonoyasu’s death, nor were they celebrating it with a smile. It was a helpless cry.

The smiles these residents donned were akin to a mask they could never take off.

The laughing tick that the people of Ebisu town suffered from, without even being able to weep for their close one, is a side effect of the SMILE fruit.

It would be one thing if they incurred the side effect of the Devil Fruit due to their own choices. But that was not the case. The fate to keep on smiling was a cruel joke, or rather a passing fantasy of Shogun Orochi, which was forced upon the unsuspecting residents of the leftovers town.

SMILE, the face of a tragedy!

Only one out of every ten people who consumed the SMILE fruit were able to gain Zoan-type abilities. The other nine received the downside of the fruit, which included a loss of ability to express sadness or anger.  These failures were termed as pleasures in Kaido’s Beast Pirates.

Orochi had a perverse interest in the SMILE fruits that had already been bitten or used by Kaido’s followers. While these leftover fruits could no longer give the Zoan powers anymore, they still contained the negative side-effects of creating more Pleasures.

The leftovers town which was teeming with sadness and death gained a place in Orochi’s bad books. He wanted to make Wano a bright and cheerful place. To achieve this, he concocted a plan in line with his warped personality. The corrupt shogun slipped the bitten off SMILEFruits to them along with the other leftover items that trickled out of the capital.

The people were initially overjoyed to find fresh fruits among the rotten bunch of stuff that they received. But after consuming these fruits a few times, the people came to realise the treacherous situation they were in. But even so, their empty stomachs could not reject the food in front of them, vile though it may be. Also, unlike normal devil fruits, the SMILE fruit tasted good. And so, with time, every last person of the village became bright and cheerful on the outside.

While Orochi’s villainous intentions came to fruition, the outcome was tragic for the people. The situation was so bad that the children couldn’t even mourn their parent’s deaths. This further cemented Orochi’s status as one of the lowest and worst villains in the world of One Piece. Let us hope the people of Wano and Ebisu don’t have to suffer too long under the oppressing rule of Kaido and the Beast Pirates.