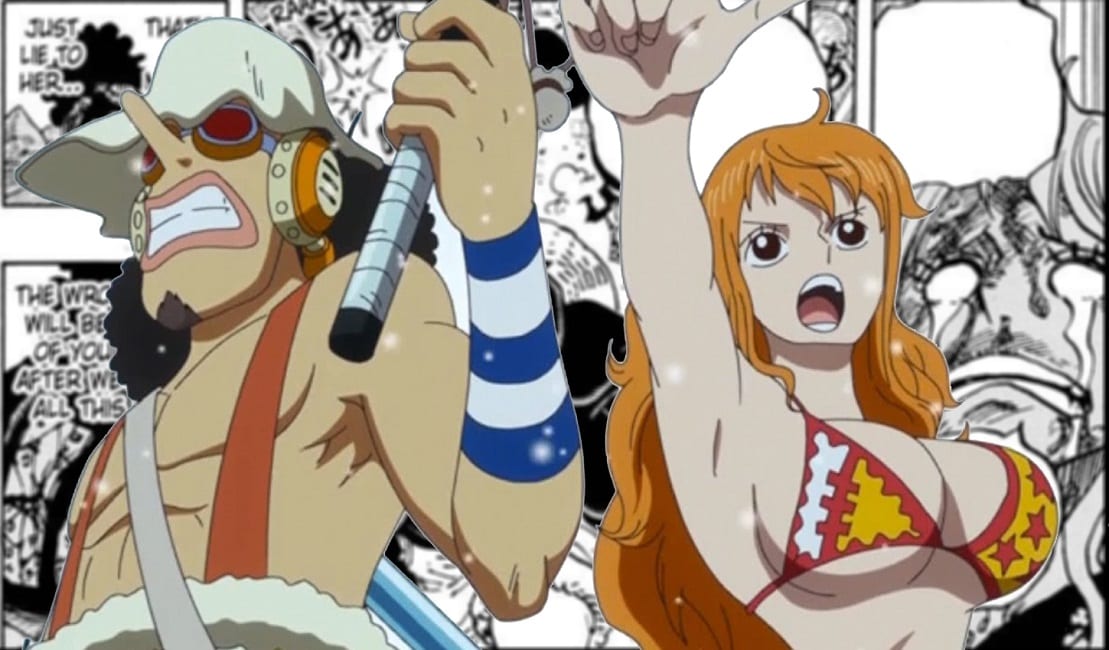 The raid on Onigashima is unfolding at a steady pace. To help Luffy go up to where Kinemon and the Red Scabbards are, Usopp and Nami (the latter obviously got caught up in it unintentionally) lure away the Tobiroppo duo of Ulti and Page One.

And thus the matchup was fixed. Nami-Usopp vs. Ulti-Page One.

If you were expecting a drawn-out fight in which the Straw Hat’s duo came out on top, you’d be seriously disappointed with the outcome. Oda does not always stick to the same narrative style, and this was again visible in the latest chapter. The face-off was supposed to be Nami and Usopp’s big moment in Wano. But then, the fight is not even shown in the manga. In fact, the way it was portrayed, we are not sure if Nami & Usopp even put up a decent stand.

Halfway past Chapter 995, we see that Nami-Usopp duo has already lost to Ulti and Page One, and that too decisively. They were not able to land a single critical hit on either of the Tobiroppo. And watching them lose so miserably has irked the fans. The difference in power was quite visible here.

While it’s true that the chapter gave Nami a chance to reiterate her loyalty to Luffy, she certainly would have been a goner if Tama hadn’t made her grand entrance.

The Straw Hats have been through multiple life-endangering situations ever since their journey started. All members of the crew were training to become stronger in the two year time-skip. You would expect all members, even Nami and Usopp, to have grown considerably stronger by this time. And that is what makes this loss a bit hard for fans to stomach.

Was it right for Nami and Usopp to lose?

“They should have defeated the Tobiroppos,” we hear you saying. “If they are going to be in the crew of the Pirate King, this is the minimum requirement,” you argue.

But before coming to that conclusion, let us compare the two parties involved in the fight.

Ulti and Page One are ancient Zoan devil fruit users. They are known for their brute force and close combat skills. Their humongous size and durability make it difficult for opponents to overcome them easily. Going by the hierarchy of the Beast Pirates, the Tobiroppos come directly under the three All Stars (Lead Performers). Meaning they are way more powerful than the cannon fodder and Headliners we encounter frequently in the raid.

The All Stars could be considered as strong as Katakuri, and Luffy was barely able to survive a battle with the latter. Though not as strong as them, Tobiroppos are somewhat close to their strength. The fact that Kaido had no qualms in letting a Tobiroppo fight an All Star and take their place is proof enough to show that their strength is not to be taken lightly.

Compared to these beasts, Nami and Usopp are normal humans without any devil fruit powers. They don’t even have armament haki to shield them from the heavy blows inflicted by Ulti and Page One. It is a commendable achievement to stay alive after sustaining such heavy damages.

Usopp and Nami’s style is more suited to long-range battles and supporting the frontline from distance (well they did prevail on Alabasta though). Climate baton gimmicks and bamboo javelins sprouting suddenly were never going to help them win the battle. It could have helped them escape though, was the situation a bit different. Which brings us to this: Franky needs to give Usopp a weapons upgrade!!

But, readers who are familiar with the Wano arc shouldn’t have been surprised by this outcome. Back in chapter 931, Sangoro faced off with Page One in his Germa 66 suit (Stealth Black). The battle ended as a draw. While this alone is not enough to speculate if Page One is as strong as the monster trio of the Straw Hats, it is safe to say that they are somewhere close. Now, if that is the case, we can’t technically expect two members of the weakling trio to take down two seasoned Tobiroppos can we?

That said, we feel that the battle at Onigashima is still unfolding. By the time everything is done and dusted Nami and Usopp will have their chance at payback, albeit in a gag manner. This loss has given them an opportunity to overcome their limitations, and it would be interesting to see how they do that. Hopefully, it won’t be in a plot armor kind of way (read Usopp shooting Tama’s millet dumplings into every Zoan user’s mouth).

What are your opinions on Nami and Usopp losing the fight to Ulti and Page One? Let us know in the comments section!