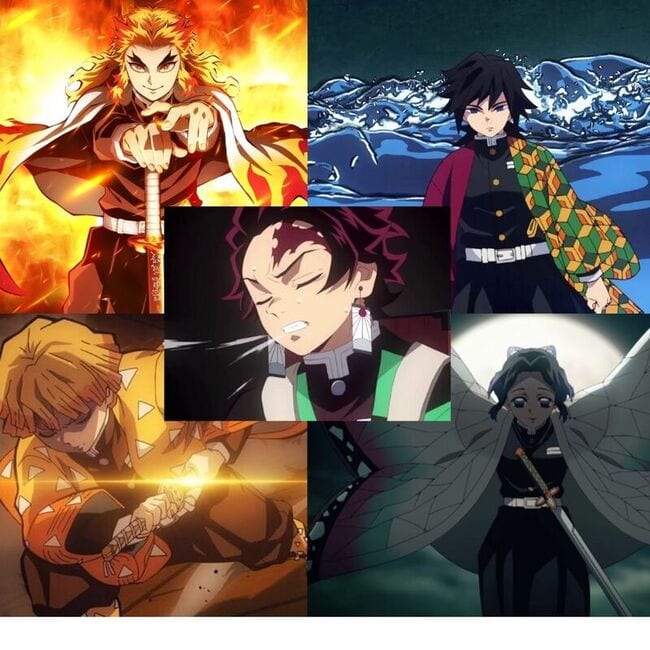 Breathing styles- the main technique that gives demon slayers their strength- is arguably one of the most appealing factors from the series. Not only are the forms fascinating, but so are their origins.

But then, what are breathing styles or breathing techniques?

Breathing Styles or Breathing Techniques are swordsmanship styles that are practiced by the Demon Slayer Corps. By using specific and concentrated breathing patterns, the user’s physical ability and concentration is heightened, due to the increased amount of oxygen in the blood. This allows them to surpass human limitations and fight on equal terms with Demons.

How many breathing styles are there in demon slayer?

In the Demon Slayer universe, there are 14 breathing styles in all. Now, for a quick lesson from Rengoku:

These styles then influence the colour of the nichirin blades (more on that soon!). However, we absolutely cannot forget the Breath of Moon– used by Kokushibo.

Breath of the Sun (Hinokami Kagura)

Breath of the Sun is the first breathing style ever made. It was made by Tsugikuni Yoriichi. This style serves as the base for the six main styles of breathing, which are discussed further in the article.

This breathing style is only known to the male members of the Kamado family, who pass it down as a rite of passage along with the Hanafuda earrings.

Why is it known as Hinokami Kagura, or the Dance of the Fire God?

The ritual uses Sun Breathing, therefore managing to hide its existence in a disguise of a dance. Muzan and Kokushibo managed to kill explicit users of Sun Breathing before. Therefore, this disguise is essential to keep the style alive!

Let’s go over the six breathing styles derived from the Breath of the Sun and their own subsequent derivations.

Rule number one, don’t call it Breath of Fire.

a. Breath of Love

This style is derived from Breath of Flame and is only used by Kanroji Mitsuri. This is because of her superhuman-isque muscle density and agility.

This is the most common breathing style. It has the most numbers of users in the manga: Urokodaki Sakonji, also regarded as the Cultivator of the style, Tomioka Giyu (the Current Water Pillar and our favourite sad boy)  Sabito and Makamo, and the protagonist, Tanjiro.

Fun fact: even Murata uses it.

Giyu made an original form of his own, known as Ju Ichi no Kata: Nagi (Eleventh Form: Dead Calm), in which he defends himself at undetectable speed, giving the illusion that he barely moved.

a. Breath of Flower

The users of this form include former Hashira Kocho Kanae, and her adoptive sister Tsuyuri Kanao. This is the only breathing form from which another style has been derived.

That is the style used by Kanae’s younger sister, Shinobu, which is the Breath of Insect.

This is unique to Kocho Shinobu, who lacks the strength to cut off the head of a demon. This form focuses more on thrusting and stabbing which are two ways to inject Wisteria poison in the body of a demon.

b. Breath of Serpent

This is a breathing style used by Iguro Obanai in the manga. The technique, owing to its name, focuses on attacks that “slither”, and gives the user the ability to strike from anywhere.

Breath of Thunder is unique in the sense that it focuses more on leg strength subsequently giving users their “lightning” speed (great pun, I know). The users mentioned in the manga are: Kuwajima Jigoro (Cultivator), Agatsuma Zenitsu, and later Upper Moon Six Demon Kaigaku.

Originally, the style consists of six styles, but as we see in the manga, Zenitsu manages to make his own during his battle with Kaigaku, known as Shichi no Kata: Honoikazuchi no Kami (Seventh Form: Flaming Thunder God).

There is only one derivation from this style, which is Breath of Sound.

a. Breath of Sound

Breathe of Sound is used by Uzui Tengen. This breathing style is unique to the Sound Pillar, who uses this to attack demons with his flamboyant nichirin blades and bombs.

This is also a breathing style that originates from Sun Breathing. The only user mentioned in the manga who uses it is Shinazugawa Sanemi. It is fast and unpredictable, making it perfect for offence based attacks.

This style has two derivations.

a. Breath of Mist

b. Breath of the Beast

Though Hashibira Inosuke did not receive any formal training, it is believed that he unintentionally used Breath of Wind to create his own style while living in the wild.

Himejima Gyomei is the only user of the form in the manga.  Just like what it’s namesake symbolises, the breathing style accentuates the strongest pillar’s abilities by providing him with the strength to manage his weapons for a devastating blow.

This one was definitely a shocker, but isn’t it so cool! Upper Moon One, Kokushibo is the only user of the breath. Unable to perform the breath his brother created, he ended up making his own style.

Since Kokushibo is immortal, he definitely had lots of time to master this breath. This style has 16 techniques! Hence, it can be argued that this is the most complex and difficult breathing style.

What is your favourite breathing style? Let us know!

P.S.: Here is a flowchart to easily remember the breathing styles made (painstakingly) just for you.

Breathing StyleDance of the Fire God